Lawrence Shankland scored an 89th-minute penalty to earn 10-man Hearts a 3-2 victory against Motherwell in a Tynecastle thriller.

The hosts’ win means they end the weekend in fourth place in the Scottish Premiership, while the visitors lie ninth.

The red card awarded to Hearts’ Jorge Grant in the 38th minute was the first incident of note, with the midfielder dismissed after catching Callum Slattery on the follow-through following a lunging tackle.

But Robbie Neilson’s side were undeterred and went ahead thanks to Andy Halliday goals either side of half-time, with the left-back now notching four in four matches.

Motherwell fought back when Louis Moult came off the bench to hit his first goal since his return on loan on Deadline Day and Blair Spittal finished off an excellent move to level in the 79th minute.

But the visitors could not build on their equaliser and Shankland scored his 12th goal of the season after Sondre Solholm was penalised for handball.

Both sides showed an attacking intent from the start and Shankland threatened three times in quick succession around the 12-minute mark. Liam Kelly stopped his attempted lob and saved a header either side of another header being blocked by Grant in the goalmouth.

Motherwell – who lost Paul McGinn to injury – had a decent chance after winning the ball high up the park but Kevin van Veen shot wide from 20 yards, before Stephen O’Donnell’s driven back-pass put Kelly in trouble and the goalkeeper was forced to save from Cammy Devlin, who sliced the rebound over.

Grant then earned his marching orders but before the game could settle down, Hearts were ahead. Halliday had a header diverted wide from a Robert Snodgrass corner before scoring from the next one, looping an effort over Matt Penney on the line in stoppage time.

The home side were celebrating again about 70 seconds into the second half when the former Rangers player ran onto Barrie McKay’s inside pass and swept a first-time shot inside the far post.

Moult then came on for Motherwell and netted within six minutes after being brought down by Gordon. The goalkeeper was incredulous that a VAR check did not exonerate him and he was unable to keep out the penalty.

Steven Hammell’s side then levelled when Spittal slid in to convert Stuart McKinstry’s low cross but the 10 men found extra reserves of energy following their midweek defeat at Istanbul Basaksehir and were rewarded when Solholm was penalised when Harry Cochrane’s cross hit his arm.

Shankland sent Kelly the wrong way from the spot before Gordon made sure of the points with an acrobatic stop from a Sean Goss volley. Neilson praised his side’s response to losing Grant, particularly given their midweek exertions in the Europa Conference League, saying: “Delighted with the spirit in the team, to come back from Istanbul late on Thursday night after a very tough game.

“We’ve asked the players to go again and they’ve given us everything. We get a man sent off and we’ve had to fight for a good hour.”

However, the Hearts boss was unhappy with the decision to send off Grant, adding: “I’ve seen it a couple of times and the referee’s understanding is that it was high and reckless but when you watch the tackle, it was on the ground. Yes, he makes contact, but I didn’t think it was too aggressive.

“The biggest disappointment is it goes to VAR and he doesn’t then go to look at it. You just hope they would have a wee bit of strength to go and do that. VAR is meant to get decisions right but I don’t think it got it right today.” 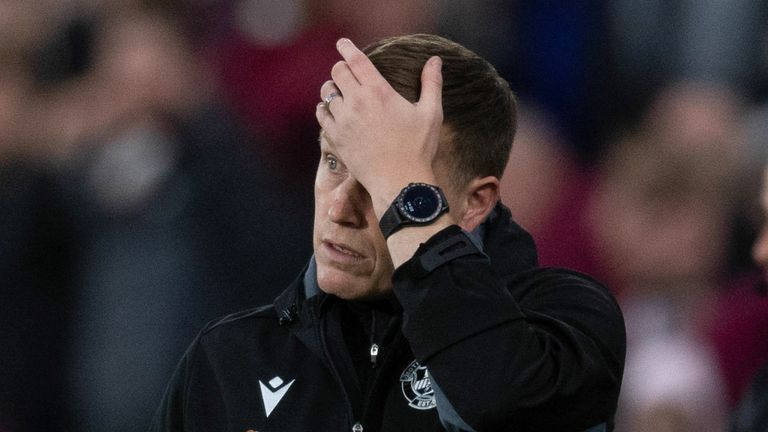 Hammell bemoaned Motherwell’s inability to make the most of their numerical advantage, saying: “It’s another tough one to take. It’s another hard luck story from our point of view.

“When we find ourselves with as much ball as we did and as much pressure as we did we should have been able to come away with a point. It’s massively disappointing and there’s a lot of things to work on.”

Hearts head to Rangers on Wednesday at 7.45pm before returning to home soil against Livingston on Saturday November 12. Kick-off is 3pm.

Motherwell host Celtic on Wednesday at the same time and then travel to St Johnstone three days later, also at 3pm.