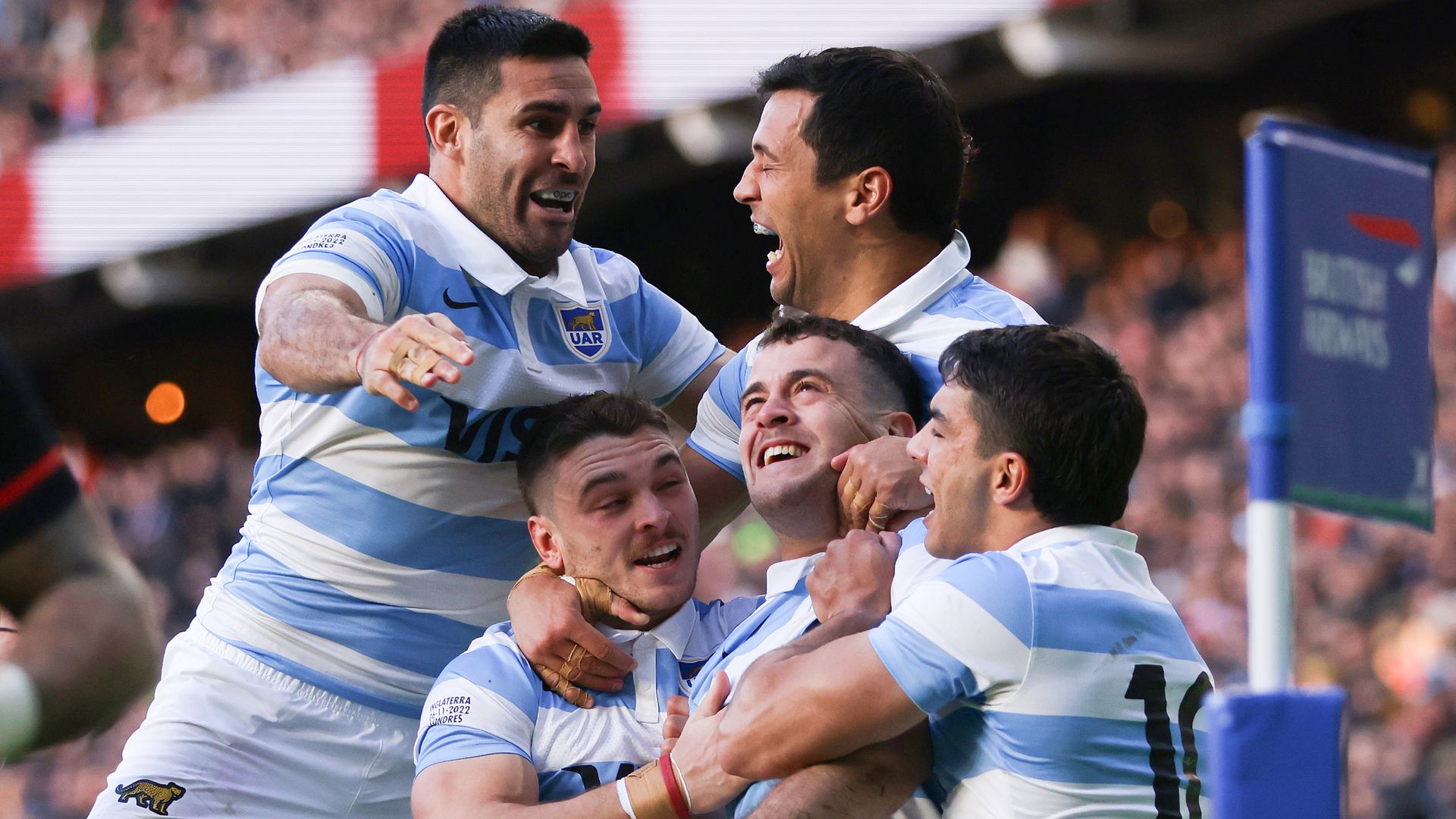 Argentina wing Emiliano Boffelli registered 25 points as the Pumas picked up a first victory over England at Twickenham for 16 years, winning 30-29 in slippery conditions.

The Pumas were looking for a first win at Twickenham since November 2006, and first over England anywhere since June 2009 in Salta, with England having been on a run of 10 successive Test wins over Argentina.

A poor first half was dominated by penalties as England skipper Owen Farrell – starting at inside-centre with Marcus Smith at 10 – traded several efforts with Boffelli, save for wing Joe Cokanasiga’s powerful finish for the opening try.

The second half saw Michael Cheika’s Argentina come alive to score twice, through Boffelli and fly-half Santiago Carreras, as they got out to an eight-point lead before England hit back as replacement scrum-half Jack van Poortvliet scored with his first touch, and Farrell added another penalty.

Boffelli (twice) – who totalled six penalties, a try and conversion by the end – and Farrell each kicked their sides into leads again in the time that remained, but it was the emotional visitors who could celebrate at the final whistle.

Owen Farrell was declared fit to captain England from inside-centre, with Marcus Smith at No 10. Northampton lock Alex Coles made his Test debut, while Manu Tuilagi and Joe Cokanasiga returned to the team. Luke Cowan-Dickie, Kyle Sinckler, Maro Itoje – at blindside flanker -Tom Curry all returned to stat too. Courtney Lawes (concussion), Jonny May (elbow) were ruled out.

Argentina back-row Marcos Kremer was selected after completing a coaching intervention set up by World Rugby to educate players on high tackles, having been sent off in October.Championship. The Pumas made just three changes to the side last faced SA in September: Props Francisco Gomez Kodela and Thomas Gallo were rotated in, and Mateo Carreras started on the right wing, bumping Emiliano Boffelli to the left in place of Juan Imhoff.

With both sides struggling early at the lineout in blustery and wet conditions, England set about kicking to the sky to put pressure on Argentina, winning a penalty in the fifth minute as fly-half Carreras was penalised for obstruction under an up-and-under.

England and Farrell chose to the kick to the corner instead of having a shot at the posts, but the Pumas held firm in their 22 defensively before Smith put in a poor kick which wing Mateo Carreras could mark and clear.

Instead it was Argentina who would hit the front as after blindside Juan Martin Gonzalez sensationally stripped Billy Vunipola in a tackle by his own 22, the visitors countered down the right into masses of space through Carreras, who looked to have taken the wrong option when kicking ahead, only for Smith to lose his footing, handing the former the chance to dive and regather, before the hosts were then caught offside.

It left Boffelli to convert a simple effort off the tee for 3-0, but the lead lasted only a matter of moments as Farrell equalised from the tee after Argentina rushed up offside thinking scrum-half Ben Youngs had taken the ball out of the ruck. Referee Andrew Brace thought not, and England’s captain drifted the ball between the sticks for 3-3.

Debutant England second row Alex Coles spilled the restart, however, and from the resulting scrum, Smith was ruled offside and Boffelli struck again for the away side to regain the lead via a cheap three points.

Pumas lock Tomas Lavanini gave away a slack penalty – diving on a ball emerging out of a ruck – to invite pressure back on his side, and though they looked to have survived the initial attack, a mistake by the officials in calling a knock-on when the ball had instead been batted back by an Argentine hand granted England a scrum in the 22.

England forced a penalty at the set-piece before kicking to the corner, but again failed to make a breakthrough as teak-tough Argentina defence forced a knock-on near the posts.

In the 25th minute, England did find a way through, though, as huge wing Cokanasiga crashed over off a Youngs short ball on penalty advantage after another five-metre scrum.

Farrell converted calmly for a four-point lead as bright sunshine replaced the rainfall, but the next time England attacked – returning centre Manu Tuilagi producing a big carry over the gain-line – Youngs’ pass flew out off the turf.

Down the other end, Pumas skipper Julian Montoya jackalled brilliantly to win a breakdown penalty, and Boffelli dispatched a kick over from all of 45 metres on the angle with a super strike.

Boffelli’s good work was undone within minutes, however, as Montoya gave away a penalty for a needless late tackle, which Farrell punished off the tee for three more points.

England hooker Luke Cowan-Dickie was caught offside directly after the restart, though, for another soft penalty, giving Boffelli the chance to register another kick, and bring the Test back to a one-point game again.

The hosts attacked with plenty of purpose and power in the final stages of the opening period, but a Vunipola knock-on ended the move and seemingly the half, with time up and just a scrum to compete.

England openside Tom Curry got over the ball to force a penalty as the Pumas scrum unravelled and scrum-half Gonzalo Bertranou spilled backwards before retrieving, however, leaving Farrell to have the final say and a 16-12 half-time advantage.

Argentina forced a confidence-boosting scrum penalty early in the second half – England loosehead Ellis Genge penalised for collapsing – and from it they took full advantage.

A superb kick to touch gave the Pumas a good platform to work off, and from it they clicked into rhythm and then some, springing play from one side of the pitch to the other – with No 10 Carreras instrumental on a looping wraparound – for Boffelli to slide into the corner.

The 27-year-old made a hash of the conversion, hooking wide for his only miss of the Test, to leave Argentina ahead by a single point.

Cokanasiga got England going again with an impactful carry down the centre of the pitch and offload for Smith to sprint on into the 22, but instead it was Argentina who got in for a second try: Farrell mis-placing a pass in the Pumas half, and fly-half Carreras showing superb hands and speed to scoop up and beat the chase of Freddie Steward to score.

A TMO review was called to check if there had been a knock-on in the tackle by loose-head Thomas Gallo, but replays showed no deviation of the ball and the score stood.

Boffelli converted for a two-score margin, but within four minutes, England had their second try as replacement scrum-half Van Poortvliet – only on 29 seconds – picked and went from a ruck at phenomenal speed to dart in.

Farrell then completed the turnaround past the hour mark, when Gallo was penalised for playing the nine deep in Pumas territory, tapping over for a 26-24 lead.

A dangerous tackle by Cowan-Dickie on Pumas replacement prop Eduardo Bello allowed Boffelli to restore the Argentina lead from distance into the final quarter.

An offside call against the visitors saw Farrell keep up his 100 per cent record off the tee, kicking through on the angle from just outside the 22 for a 29-27 England lead with 13 minutes to go, but it was the last time they would be in front.

First, in a shambolic last few minutes for the hosts, England prop Kyle Sinckler went off feet at the breakdown so Boffelli could kick Argentina in front again inside the final 10 minutes, with the home side’s discipline deserting them.

A guilt-edged chance for points in the Pumas 22 was then passed up as after Coles carried hard to create the opportunity, he was then penalised for crossing and obstruction a few phases later in a big moment.

With time running out, replacement tighthead Joe Heyes gave away a costly penalty at a scrum in the England half, after referee Brace had warned him specifically not to drive across.

Argentina chose to kick to the corner in an attempt to see out the Test, and though they couldn’t score again, it worked as England failed to get back up the pitch and into a scoring position, leaving all but a small portion of Twickenham’s watching fans distinctly flat.

Eddie Jones’ England next host Japan at Twickenham on Saturday, November 12, in a 3.15pm (GMT) kick-off for the second of their four autumn internationals this Test window.

For Cheika and the Pumas, they next travel to face Wales at the Principality Stadium in Cardiff on Saturday, November 12, in a 5.30pm (GMT) kick-off.