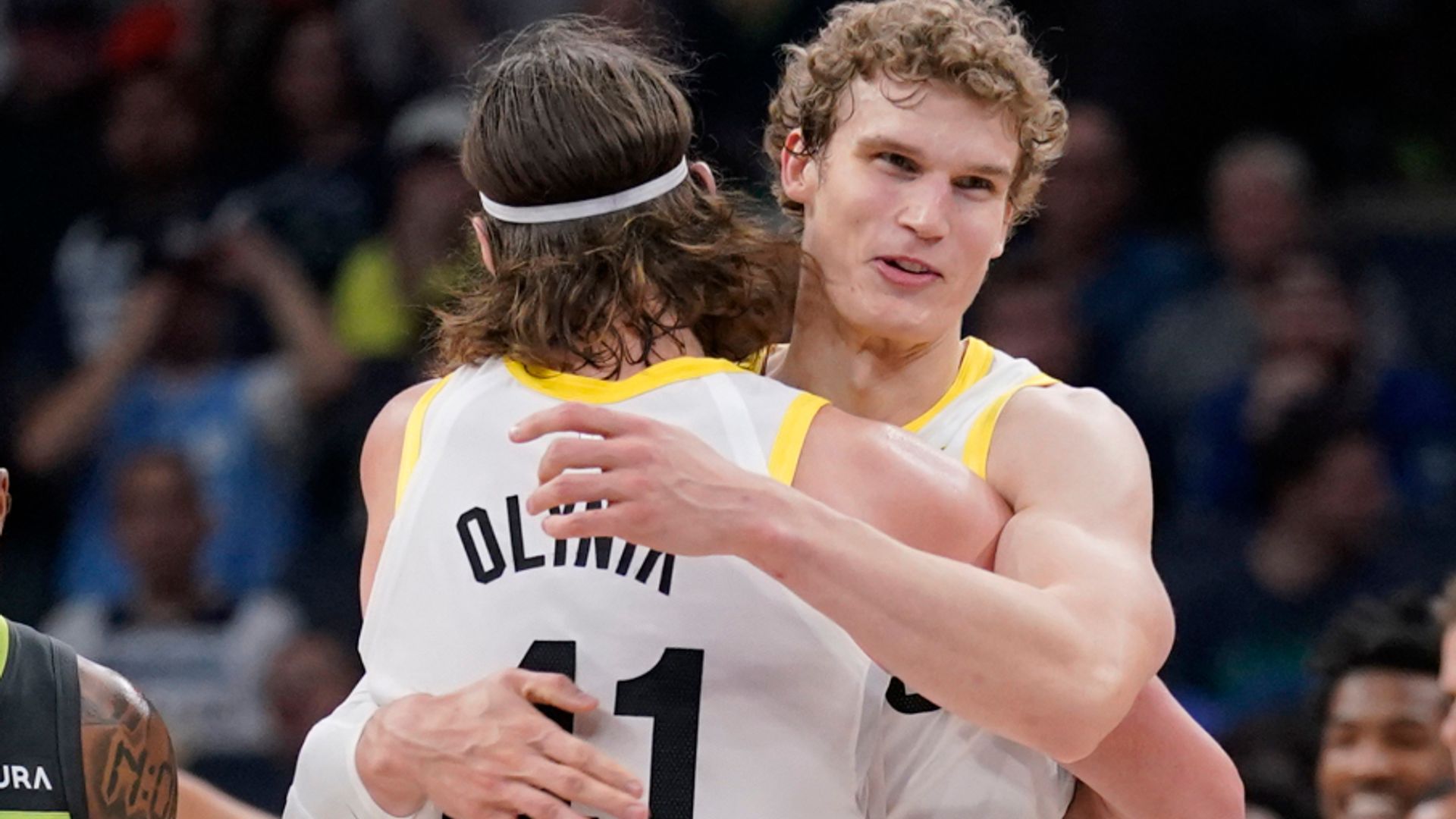 The biggest surprise package in the early weeks of the new NBA season has no doubt been the Utah Jazz.

Everybody thought they were in rebuild mode and you would have been hard pushed to find any basketball fan or analyst who picked them to finish above .500 on the year.

Despite that, they have come through the opening 11 games with an 8-3 record, are unbeaten at home and have just earned a rare sweep of wins on a road trip to Los Angeles.

The Jazz rallied after blowing a 10-point lead in the first half and trailing in the third and fourth quarters to beat the Los Angeles Clippers 110-102 on Sunday night, following on from a 130-116 win over the Lakers on Friday.

Their overall record is not the result of an easy run of fixtures – they have had the 11th-hardest schedule so far but have found a formula which is working for them night-in and night-out under rookie head coach Will Hardy – even when under-manned. Jarred Vanderbilt sat out with right adductor soreness against the Clippers but, although they missed his presence on the offensive glass, the rest of the team upped their level of intensity to compensate for his absence. A very good sign for a young ball club.

“I thought our team answered the bell,” said Hardy. “You know, as a coach, you never liked to have one of your key players out. It’s something that everybody in the NBA goes through but everybody stepped up and everybody upped their physicality and we were still able to create some turnovers.

“I love the fact that our team just keeps going and they don’t care who’s out there as long as we get the win. [I’m] just proud of the group and the way they stick together.

“Finding ways to win is fun. I’m very proud of the team, to overcome 20 turnovers and find a way to win through defense and winning on the road in the NBA is hard. So it was a great, great trip.”

Jordan Clarkson scored 23 points and Collin Sexton added 22 from the bench, while Lauri Markkanen finished with 18 points and nine rebounds to continue his excellent recent run of form. The Finn did not miss a shot in the first half. He hit all four of his field-goal attempts and made his only three-point try in addition to all five free-throw attempts for 14 points. 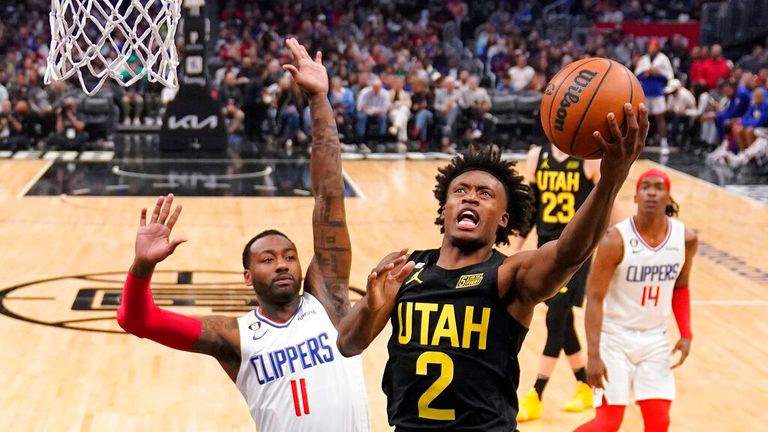 The Clippers, on the other hand, missed all 11 of their three-point attempts in the fourth. George missed several shots down the stretch when the Jazz pulled away after erasing a four-point deficit and a lot of that was down to Markkanen’s tough defense.

“Lauri did a really good job of making Paul George work hard and not just to make shots but to get the ball,” Hardy said. “Not all 11 [three-pointers] were guarded perfectly. There were just some that were missed.

“Overall, they did a good job of pressuring the ball and guarding to make the Clippers have to work to get their three balls off. I just was really proud of the way they competed on the defensive end and I thought it started with Lauri on Paul George.”

The Jazz scored nine in a row, capped by Malik Beasley’s three-pointer, to take the lead for good with five-and-a-half minutes remaining. It was part of a 14-2 run that extended Utah’s lead to 106-98. Sexton had seven points in the spurt.

“I’m starting to get more comfortable in myself,” Sexton said. “Just staying ready and being present throughout the game.”

The former Cleveland Cavaliers guard’s cutting to the basket off the ball was particularly impressive and he admits it is something which he is being encouraged to do more and more.

“I’ve been cutting off balls playing with Kevin Love and also Ricky Rubio whenever I could, and they always pretty much found me,” Sexton said. “So, just in the back of my mind, whenever someone’s drawn so much attention, [is] to make sure I cut and, also not just cut for myself, but cut for my team-mates.

“There was a few times tonight where I cut it and someone got an open three, so [it’s] just coach continuing to tell me if you pick in, cut, do something so you can not [only] get yourself a shot but somebody else, and that’s pretty much me just being selfless.”

Hardy praised Sexton, the No 8 pick in the 2018 NBA Draft, for how he has taken to his instructions in the early part of his Utah Jazz career.

“We work on it a lot. Practice, shootarounds, film – we think that that’s a really important part of our offense is cutting,” said Hardy. “Collin’s recognising the timing much better of when to cut in-between the defenders, especially when they’re rotating on the weak side. I thought down the stretch, he just did a really good job.

“He is so forceful, so athletic going towards the basket. He’s able to gather himself very quickly, like he’s able to go from catching the ball to up in the air at the rim really quickly, which helps him a tonne. Collin is going to continue to work on it because like a lot of the guys on our team, we’re going to continue to put Collin in a variety of spots on and off the ball.”

Another aspect of the Utah Jazz’s offensive scheme is offensive spacing which allows the team to pass the ball around the floor to search for the best look.

Speaking after the team’s win over the Lakers on Friday, locker room veteran Mike Conley cited that as one of the key factors in their early-season success. 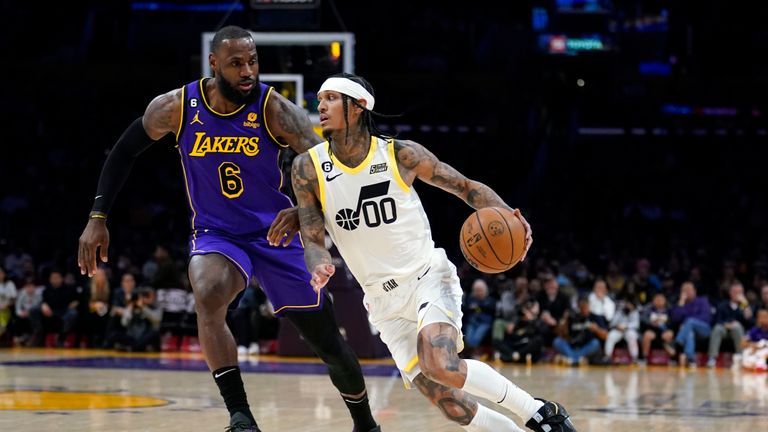 “I think the spacing is the biggest difference for us,” said Conley, now in his 16th year in the league. “We’re now able to drive to the rim and see their contested lay-up from behind with your man and no help from the weak side, or there’s help from the weak side and you throw it to the corner and you’ve got a wide open three.

“Now we’re so unselfish, the ball’s just moving around and pinging and every one of the five guys can beat you off the dribble and make plays, so at any moment that just allows us to get going, get a good rhythm to the game and you get a lot of guys able to score buckets when you do that.”

They employed the same tactics to good effect a couple of nights later in the same arena against the Clippers.

“We’ve talked about that,” said Markkanen. “We got in the bonus and then having Collin cut and everybody’s cutting and still trying to have that good spacing, to get some threes off of it. If they mess up on coverages and stuff, but we were just trying to get to the rim and get to the free-throw line.”

“Down the stretch, executing in the half court, it was just about getting our spacing right,” Hardy said. “We liked Mike on that empty side and Collin was in the slash spot on the weak side. [He] is showing us that he has really good instincts as a cutter, he’s such a forceful player going to the rim, so I thought he did a really, really good job executing on the weak side.”

The Clippers pulled within four on a dunk and inside basket by Ivica Zubac before Sexton dunked with 54 seconds left.

Sexton then fed Markkanen for an inside basket in the closing seconds to help see out victory.

The final element of the Jazz’s early-season blueprint is the versatility the team is playing with on both ends.

The idea of Markkanen playing lockdown defense will seem like unfathomable to fans of the Chicago Bulls where he was drafted and specialised as a rangy shooter.

They also have a team packed with players who are being given freedom to use their offensive gifts and who work hard, as Sexton alluded to, by putting in effort off-ball to ensure their team-mates get good shots.

“A lot of that has to do with our versatility,” Conley said. “With Lauri and in Kelly (Olynyk) and Jarred (Vanderbilt), those guys, it’s not just our guards driving and kicking. It’s Lauri making extra plays; it’s Vando, legitimately being everywhere, setting screens, rolling.

“It’s a number of ways that we kind of crack the paint – and we’re not just doing it by like ISO dribbling or anything like that. So it really keeps defenses questioning if they should switch or not switch or help and that allows us to be who we are.”

Who they are is a team playing with no fear and, although many believe their form will tail off, the Jazz have an assuredness about the talent and character they have in their team.

“I don’t care if they doubt us,” said Markkanen. “It fuels us and we know what we have in this locker room. We have great players and I think, most of all, it’s just [that fact] we play together, we play as a team.

“Of course there’s going to be nights that you’re not at your best and I think when we do play our style of basketball and play fast and knock-down shots, I think we can beat anybody. We’ve just got to keep working to get even better. Not just have these first 10 games or whatever.”

They now have a chance to make it nine wins out of the first dozen games when they host the Lakers on Monday to conclude a back-to-back. Utah are 4-0 at home and will probably expect to beat a Lakers team which is struggling to establish an identity, something they already seem to have done indelibly, even at this early stage of a new season.

Watch more live NBA later this week as Atlanta Hawks host Philadelphia 76ers on Thursday from 12.30am; 76ers then host Hawks on Saturday night from from 12.30am; Minnesota Timberwolves travel to the the Cleveland Cavaliers in our Sunday game from 11pm, all three live on Sky Sports Arena.