‘Look out, rest of the world’ – Babar to produce ‘something special’ That’s the view of Pakistan team mentor Matthew Hayden, with Babar having averaged just 7.80 in the Super 12 stage, scoring only 39 runs in total and falling for singles figures four times out of five.

Babar is a former No 1-ranked T20I batter in the world – India’s Suryakumar Yadav holds top spot these days – and has racked up over 3,200 runs and 31 fifty-plus scores in his T20I career to date.

Speaking ahead of a semi-final you can watch live on Sky Sports Cricket (7.30am build-up, 8am start), former Australia batter Hayden said: “In any given career, you have significant moments of ups and downs, and the challenges and the humps along the way, they cement you and your greatness, how you achieve under adversity.

“There’s no question that Babar has been under some adversity. That will make him only an even greater player. You can’t continue to keep on punching out hundreds and 50s and strike rates of 140-plus.

“As we all know about the weather, once there’s a lull, there’s often a storm that follows. So look out, rest of the world, because I think you’re about to see something very special from Babar.”

Pakistan’s hopes of reaching the semi-finals looked slim after they started their Super 12 campaign with successive last-ball defeats to India and Zimbabwe – but wins over Netherlands, South Africa and Bangladesh, coupled with South Africa suffering a shock loss to Netherlands, propelled Babar’s men into the last four.

They are now two victories away from a second T20 World Cup title, having won their first in England back in 2009.

Pakistan’s progress in Australia has drawn comparisons with Imran Khan’s ‘cornered tigers’ from 1992, with that side going on to win the 50-over World Cup having been on the brink of elimination. 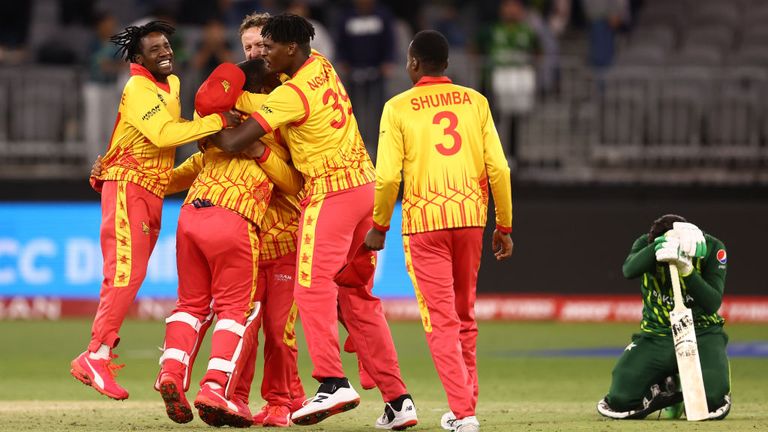 Hayden added: “That was a memorable one for Pakistan cricket. It was also a tournament that was plagued by the nuances of Pakistan cricket; that is, there’s not a dominant performance.

“There’s a performance that gets challenged and then Pakistan suddenly turn up and they’re dangerous and formidable. And that tournament was exactly that.

“[Pakistan all-rounder] Shadab Khan actually said something very significant in the dugout the other day when we were playing our last match: ‘welcome to Pakistan cricket’.

“(This has been an) incredible experience, it’s been a rollercoaster ride, but a ride that I wouldn’t have any other way.”

Williamson: A number of players have stood up

New Zealand are looking to reach their third World Cup final in four years – and hoping to finally get their hands on the trophy after losing to England in the 50-over final at Lord’s in 2019 and then suffering defeat to Australia in the 2021 T20 final in the UAE.

Black Caps captain Kane Williamson said: “The fickle nature of T20 and the competitive nature of the tournament, with all teams beating each other, means there’s not a reliance on one or two players.

“There have been a number of players that have stood up on a number of occasions, and everybody certainly has put their hand up. It’s really trying to play together as a team and focus on that.

“We’re certainly focused on our challenge. And it’s a strong Pakistan.”

Watch New Zealand vs Pakistan live on Sky Sports Cricket on Wednesday. Build-up begins at 7.30am ahead of an 8am start at the Sydney Cricket Ground.