Babar Azam returned to form as a resurgent Pakistan beat New Zealand by seven wickets to reach their first T20 World Cup final since winning the competition in 2009.

Pakistan, who have now won four matches in a row since starting the tournament with successive last-ball losses to India and Zimbabwe, will face India or England in Sunday’s showpiece at the MCG, with those two teams meeting in Thursday’s second semi-final in Adelaide (8am UK time).

Babar’s side restricted New Zealand to 152-4 in Wednesday’s first semi-final in Sydney, before reaching their target with five balls to spare as the skipper banished his Super 12 blues with 53 from 42 deliveries in an opening stand of 105 from 76 balls with Mohammad Rizwan (57 off 43).

Babar was dropped first ball by New Zealand wicketkeeper Devon Conway and went on to notch his highest score of the competition, having topped out at 25 in the previous round while averaging a paltry 7.80 and recording four single-figure dismissals in five knocks.

Pakistan team mentor Matthew Hayden had promised Babar would produce “something very special” in the semi-final and the 28-year-old duly delivered, albeit with a huge helping hand from Conway.

Rizwan’s departure at the end of the 17th over with 21 runs required gave New Zealand hope but Mohammad Haris (30 off 26) carted Lockie Ferguson for successive boundaries in the 18th to put Pakistan back in firm control before Shan Masood laced away the winning single off Tim Southee one ball into the 20th. 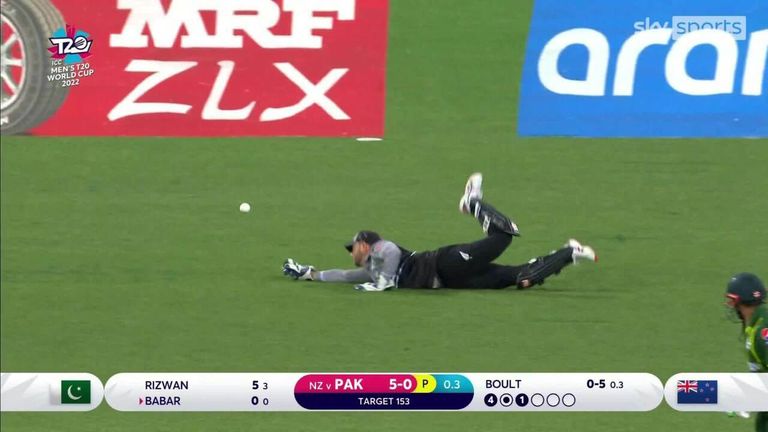 Pakistan are now dreaming of another World Cup title in Australia, 30 years after Imran Khan’s ‘cornered tigers’ rallied to win the ODI version after, like the current crop, being on the brink of elimination and then beating New Zealand in the semi-finals.

The 2022 Pakistan side needed a shock defeat for South Africa against Netherlands to make it into the semi-finals but are now just one win away from a first World Cup title in 13 years.

For New Zealand, their hopes of a third World Cup final in four years were dashed, with the runners-up in last year’s T20 World Cup to Australia and the 2019 50-over World Cup to England the latest victims of a revived Pakistan.

An absorbing encounter began in dramatic fashion with New Zealand opener Finn Allen (4) bashing the first ball of the match for four, overturning an lbw dismissal second delivery with his review showing a healthy inside edge and then being pinned leg before third delivery by Shaheen Shah Afridi (2-24). 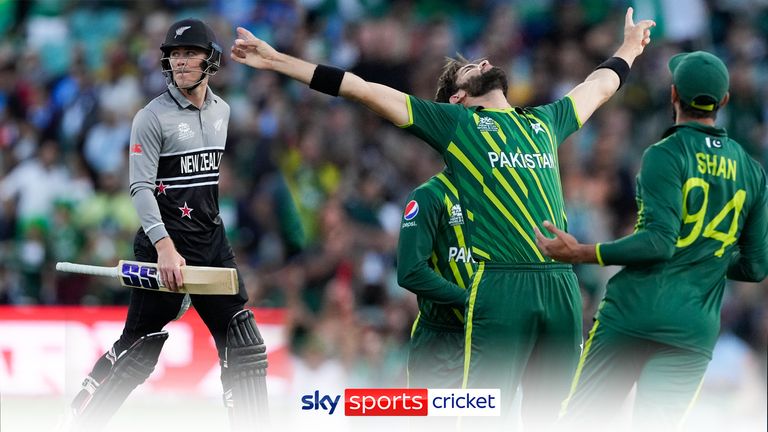 Four, overturned wicket, actual wicket – there was a rip-roaring start to the T20 World Cup semi-final between New Zealand and Pakistan at the SCG

The Black Caps stuttered to 49-3 after eight overs with Conway (21 off 20) run out via Shadab Khan’s direct hit from mid-off and Glenn Phillips (6) chipping back to left-arm spinner Mohammad Nawaz off a leading edge as he looked to work leg-side.

Daryl Mitchell (53no off 35) and captain Kane Williamson (46 off 42) subsequently shared a fourth-wicket stand of 68 from 50 deliveries, which was snapped when Williamson was bowled on the scoop by Shaheen’s excellent off cutter.

Mitchell, who would have been run out on 31 if not for a Haris Rauf fumble at the bowler’s end, went on to clinch a 32-ball fifty and his second in as many T20 World Cup semi-finals after striking an unbeaten 72 from 47 deliveries in the win over England in Abu Dhabi last November.

However, Mitchell ended up on the losing side this time around, with Babar making Conway pay for shelling him off the bowling of Trent Boult.

An lbw review against Babar on 30 came to nothing with Mitchell Santner’s delivery set to bounce over the stumps, before New Zealand missed the chance to run out the Pakistan captain on 35 with Boult wayward with his shy at the stumps from point with Babar short of his ground.

Babar eventually departed in the 13th over after heaving Boult to Mitchell at long-on, Rizwan holed out to deep cover off the same bowler and Haris was caught off Santner at short leg, but Pakistan would not be denied.

For Pakistan, it’s Sunday’s final at the Melbourne Cricket Ground. For the competition, it’s Thursday’s second semi-final between India and England at Adelaide Oval. Watch that match live on Sky Sports Cricket and Sky Sports Main Event, with build-up beginning at 7am ahead of the first ball at 8am.