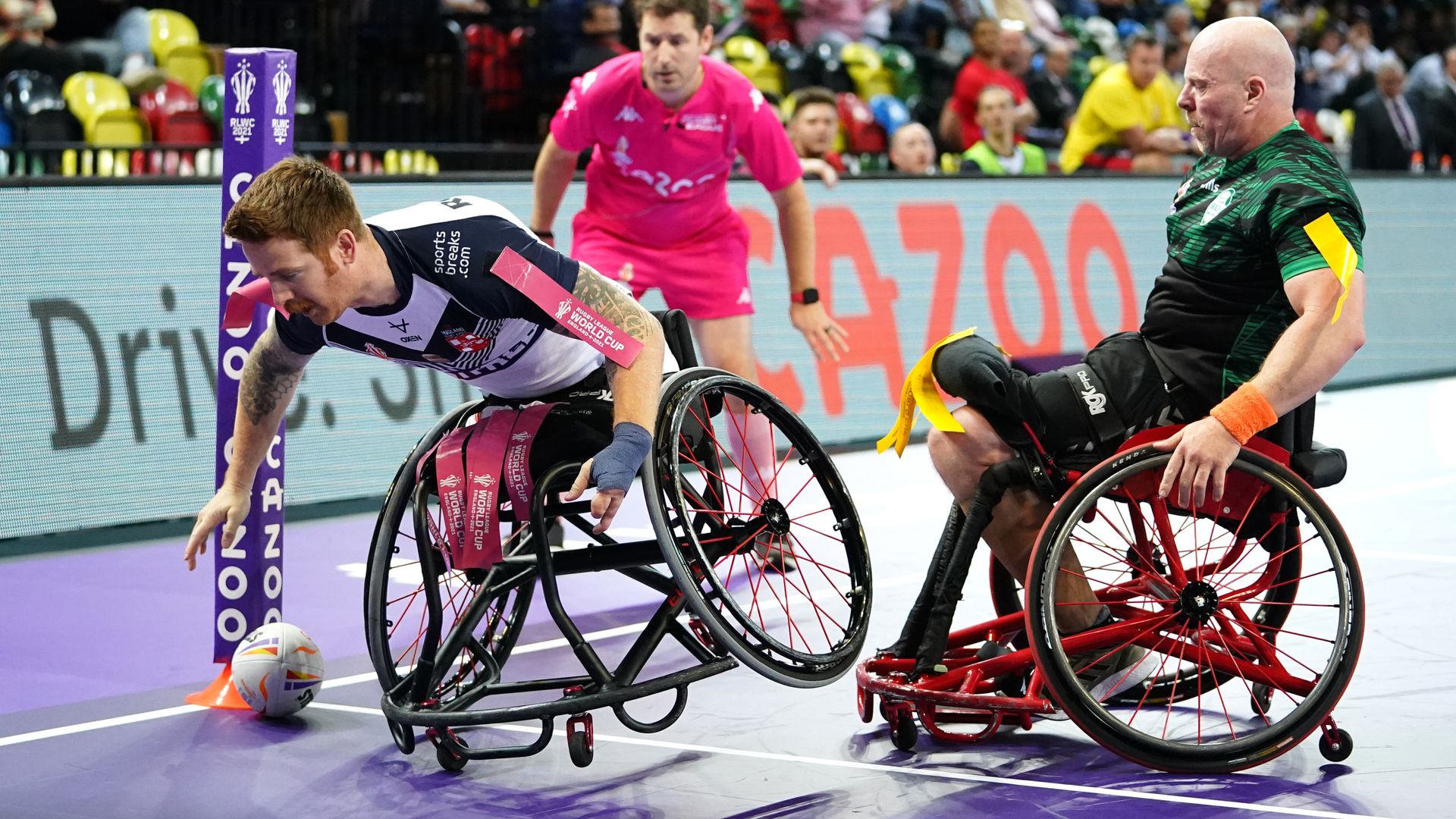 Four tries each from Joe Coyd and James Simpson helped set England on their way to a 21-try rout of Ireland in their final Group A match; the host nation now face either Wales or the USA in the semi-finals; Australia beat Spain to book a showdown with France in the other semi-final

Joe Coyd and James Simpson stole the show with four tries each as England warmed up for Sunday’s semi-final in the Wheelchair Rugby League World Cup with a 121-0 thrashing of Ireland.

Tom Coyd’s men had booked their spot in the last four with a 104-12 victory over Spain at the weekend, but produced an even stronger attacking display on this occasion with Jack Brown and Nathan Collins adding hat-tricks in the 21-try rout.

England are now only two victories away from a second-ever World Cup triumph and will have all eyes on Thursday’s Group B matches to see who they will meet in the semi-finals.

After Tom Coyd’s side hit triple figures against Spain on Sunday, they set about repeating the trick with three tries scored during the opening 10 minutes of this Group A fixture through Sebastien Bechara, Joe Coyd and Tom Halliwell.

By the midway point of the first half, they had established a 36-0 advantage, putting them on course to better their weekend thrashing.

Simpson produced the pick of the early scores, finishing off a brilliant team move that saw quick passes from Halliwell, Bechara and Joe Coyd in front of the try line.

Joe Coyd completed his hat-trick after 26 minutes and star man Brown soon made an impact moments after his arrival by bringing up the half-century for England.

Collins had taken over conversion duties by this point but got in on the act just before half-time with a fine finish in the corner and England held a 66-0 lead at the break following a 12-try effort with Halliwell, Bechara, Brown and Simpson grabbing doubles.

Ireland were able to provide some resistance at the beginning of the second half but Brown completed his treble in the 46th minute after latching onto Collins’ punch forward.

After Collins added the extras, he grabbed another try before the Irish supporters saw their celebrations of a try cut short. Tom Martin dotted down in the corner but England’s Adam Rigby had ripped off his tag to make the tackle in the nick of time.

Normal service resumed soon after with Collins going over for his hat-trick and, minutes later, Rigby’s try took the hosts within touching distance of the 100-point mark.

And it was Rigby who brought up three figures with 10 minutes left after fine work by Declan Roberts to give another record-breaking crowd more to shout about.

There was still time for Simpson to complete his treble before he and Joe Coyd added further scores. England now face either Wales or the USA in Sunday’s semi-final at the English Institute of Sport.

Earlier in the day at the Copper Box, Australia confirmed their place in the semi-finals with a 52-32 win over Spain in the other Group A match.

James Hill led the way for the Wheelaroos with four tries and Diab Karim added two along with kicking three conversions.

Spain replied with two tries apiece from Theo Gonzalez, who kicked three conversions, and Raphael Monedero – plus one each from Joel Lacombe and Yannick Martin. Wilfrid Seron added one conversion.

Australia now face reigning champions France in Sunday’s other semi-final in Sheffield (12pm). The final is at Manchester Central on Friday, November 18.