No limits for SKY: The artist looking to eliminate England Considering the role India has played in the rise of T20 cricket, it seems only fitting that one of their own sits top of the international batting rankings in the format.

On current form, Suryakumar Yadav is in a league of his own, both statistically and stylistically.

The ridiculously-talented right-hander has plundered a leading 1,026 runs in T20 internationals in 2022 to take his record in this version of the game to 1,270 runs in 39 innings at an average of 42.33 and a strike-rate of 179.63, numbers achieved by playing sparkling strokes all around the ground. He is a real ‘Mr 360’.

Since whipping the first ball he faced in international cricket for six – a Jofra Archer bouncer sent over the leg-side in Ahmedabad in March 2021 – Suryakumar has not let up and now holds a 19-point lead over Pakistan’s Mohammad Rizwan in the T20I batting charts. 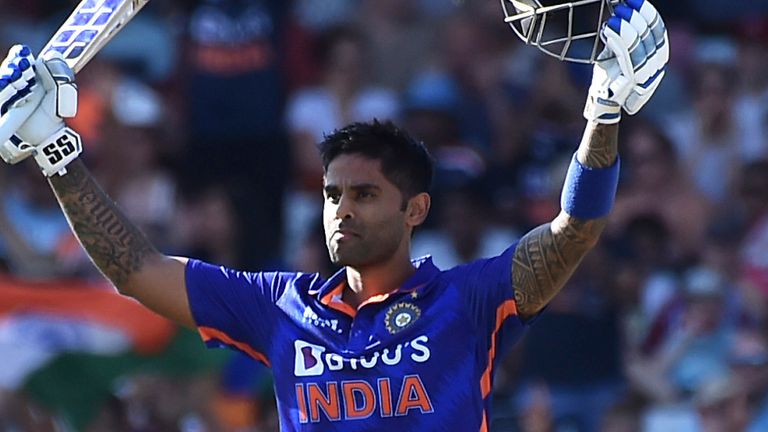 Suryakumar, nicknamed ‘SKY’, hit England for 57 from 31 balls in his first India innings and then 117 from 55 balls in his best as he smoked 14 fours and six sixes at Trent Bridge in July.

On Thursday, in the T20 World semi-final at Adelaide Oval (8am UK time live on Sky Sports Cricket), Suryakumar will face England again.

Sky Sports Cricket’s Michael Atherton said: “[Former India head coach Ravi Shastri] told him to ‘land the first punch’ and from his first ball he flipped Archer’s bouncer into the stands for six almost Gordon Greenidge-style over fine leg. He has been pretty much landing punches ever since.”

Suryakumar has flogged South Africa, Netherlands and Zimbabwe for fifties in this World Cup, playing a number of jaw-dropping shots, including his trademark sumptuous flicks for six over the leg-side, but also superb shots over the off-side.

England all-rounder Moeen Ali said: “He’s an amazing player, I do feel like he’s the best in the world. He’s probably taken T20 cricket to another level. I think he’s the first of the players who’s come through where you can’t bowl at him when he’s playing well. It’s very difficult and a weakness doesn’t really stick out.”

Against Zimbabwe, Suryakumar went through his full repertoire, amassing most of the 79 runs India scored in the final five overs. Aerial off and cover drives, carves to deep third and a series of superb, scarcely believable scoops over fine leg and backward square.

Atherton said: “His innings against Zimbabwe was incredible. [Zimbabwe bowler] Richard Ngarava was trying to push him as wide as possible but he was still flipping the ball behind square.

“He is an incredible player, rightly the No 1-ranked T20 batter. There are more established names in the India team – Virat Kohli, KL Rahul, Rohit Sharma – but I reckon he is the one England’s bowlers will be thinking about most and how they stop him from scoring.

“Adelaide Oval has short, square boundaries and SKY’s great strength is either slicing it behind point or flipping it behind square. You would think the ground would play to his strengths.

“But anyone can fail. His numbers are staggering in T20 but at that tempo you are going to fail occasionally. He may just have a bad day.” He may, Athers, but he has not had too many bad days of late, with six half-centuries across his last nine T20 international innings.

“Around 15 WhatsApp messages came through on his strengths – playing pace bowling and spin well, hitting square, scooping more than anyone else in the history of the game, his strike-rate – but the group dried up completely when I asked about his weaknesses!

“The only one they had was slow left-arm spin and England don’t have one with Liam Dawson only in the reserves. I would test him with Mark Wood up front.”

Atherton, meanwhile, feels Suryakumar’s instant success in international T20 cricket is in a large part down to the “solid grounding” he has had in first-class cricket, with the batter notching over 5,000 runs in his red-ball career to date, with 14 hundreds, 26 fifties and an average of 44.

Atherton added of Suryakumar: “He has mentioned before about playing a lot of rubber-ball cricket on concrete pitches with skiddy bounce and using the pace of the ball.

“Another thing I think is important is that he is an established cricketer at 32 years of age and has played a lot of first-class cricket so his fundamentals are very sound.

“Some players bursting onto the scene as T20 players in England, like Will Smeed, for example, are close to the top level having not had that grounding.

“It may be me being a little bit old-fashioned but I actually think by having that grounding you get a broad range of experiences, tested along the way and have something to fall back on if you start to struggle. I think that solid grounding has helped him have that immediate success at this level.”

Test cricket could be on Suryakumar’s radar in the future, with his old advice-giver Shastri saying recently: “I think he is a three-format player. Let me tell you, this guy can play Test cricket and he can surprise a few. Send him there at No 5 and let him stir it up.”

But for now, Suryakumar’s focus in on taking India through to the T20 World Cup final by eliminating England.

Jos Buttler’s side may need SKY to have one of his rare bad days.