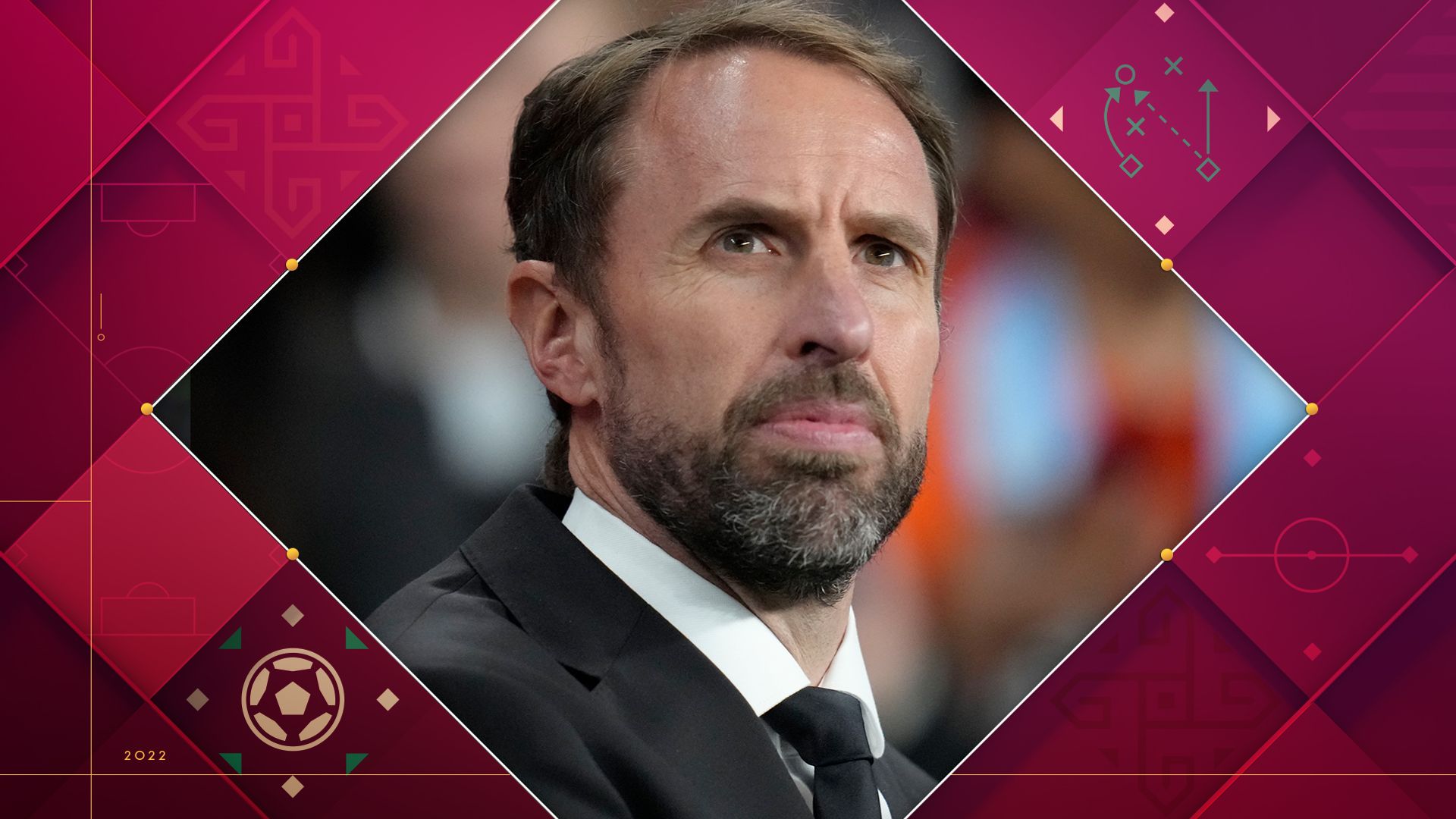 Gareth Southgate has revealed his 26-man squad for the World Cup in Qatar – but how experienced, how clinical and how defensive are his selections?

Leicester midfielder James Maddison and Newcastle striker Callum Wilson made the final 26-man squad – despite last playing for England in 2019.

Conor Gallagher also forced his way onto the plane – having impressed with his intensity style for Chelsea this season and featuring in recent England squads.

So, is this the squad to finally bring it ‘home’? Let’s take a look at the numbers behind the squad…

The well-versed lyrics from Baddiel and Skinner’s anthem Three Lions (Football’s Coming Home) originally referred to “30 years of hurt”, but that period of time without any silverware in the men’s game has now extended to 56 years since it was released ahead of Euro ’96.

At World Cups, England failed to qualify for back-to-back tournaments in 1974 and 1978 before enjoying a period of incremental improvement between 1982 and 1990 – culminating with Gascoigne and Co. crashing out at the semi-finals stage in a penalty shoot-out against West Germany at Italia 90.

That progress ended abruptly with failure to qualify for the 1994 World Cup in the USA, but England built again and enjoyed two successive quarter-final run-outs in 2002 and 2006.

However, England endured three successive tournaments with regressive progress after the 2006 tournament in Germany – before suffering a humiliating group-stage exit at Brazil 2014 under the stewardship of Roy Hodgson, who stepped aside when his contract expired after losing to Iceland in the round of 16 at Euro 2016.

Sam Allardyce took the reins but left the role after merely one game in charge following a newspaper sting – with Southgate taking the helm on a caretaker basis but assuming the role on a permanent basis four games later.

The former England defender steered them to their first semi-final stage at the World Cup in 28 years but lost 2-1 to Croatia, before guiding his side to the Euro 2020 final – played in 2021 due to the Covid-19 crisis – and losing the penalty shootout 3-2 against Italy.

Southgate appeared to start from scratch as England boss, with his 2018 World Cup team ranking as the most inexperienced England team at a World Cup in 56 years – the squad averaged merely 21 international caps.

Four years later, that average has risen significantly to 31 and ranks as the fourth-most experienced England squad out of 17 World Cups since 1950.

It is worth recognising that some of England’s most successful tournaments in the modern era have come from squads with the most international experience within the ranks – reaching the semi-finals in 1990 with squad members averaging in excess of 30 caps.

What about the England squad’s average age?

Jude Bellingham is England’s emerging star, shining in the friendlies leading up to the tournament to buck below-par team performances and staking a serious claim to replace then-sidelined Kalvin Phillips as the regular starter alongside Declan Rice in midfield.

The 19-year-old will be the only teenager in the camp at Qatar, with Arsenal winger Bukayo Saka (21), Manchester City forward Phil Foden and Chelsea midfielder Conor Gallagher (22) also vying for starting berths despite their early years.

England are without a true ‘veteran’, but do have a trio of seasoned stars at their disposal in Jordan Henderson, Kyle Walker and Kieran Tripper – all now 32 years of age.

International caps and average ages do not necessarily go hand in hand. There were fewer games in the early days, which skews results from previous eras, but Fabio Capello cobbled the eldest England squad in recent years in 2010 averaging at 28 years and 157 days – nearly matching the eldest ever under Walter Winterbottom in 1950.

The general trend towards handing younger players international experience is epitomised by the disparity between caps and age in 2006. In terms of average caps, England ranked third in the all-time list in Germany under Sven-Goran Eriksson but clocked an average age of 25 years and 95 days – the second-youngest ever.

A Sky Sports study found most of the successful Premier League champions have had starting XIs averaging around the age of 27 and the current England squad averages at 26 years and 153 days – which is just 48 days younger than England’s 1966-winning squad.

The current squad comprises a myriad of clubs. However, as with most cases, Manchester City dominate with five players representing the sky blue, while Arsenal, Chelsea, Newcastle and Manchester United all have three players, followed by Liverpool and Tottenham each with two.

There is also continental representation in the form of Borussia Dortmund midfield Jude Bellingham – but no space for squad regulars Roma striker Tammy Abraham and AC Milan defender Fikayo Tomori.

Perhaps unsurprisingly, Manchester United lead the way for all-time representation – ahead of Tottenham and Liverpool. Those three clubs have a commanding lead over chasing pair Arsenal and Chelsea.

Southgate has been widely criticised for his defensive tactics, but those accusations are countered with success at both tournaments on his watch and an impressive 60.5 per cent win rate – which ranks as the fourth-best ratio under any England manager to have managed more than one game.

Indeed, there is also a broader belief that defensive tactics reap greater rewards in tournament football, where keeping watertight is arguably more important than scoring in open play – with penalty shoot-outs introduced in knockout rounds.

England manager Gareth Southgate says that the balance of his squad was the main focus and believes it has everything covered.

England have shipped 0.68 goals per game on average under Southgate, which ranks as the fifth-best ratio in history – excluding Sam Allardyce’s record from one game in charge.

Southgate selected nine defenders in his squad for Qatar – one fewer than in Russia four years ago. Indeed, nearly half of his squad for that tournament were registered as defenders, or 44 per cent, to be precise. That proportion ranks as the highest defensive composition in England’s history at World Cups.

This derives from his preference to play five at the back, which often leaves space for only two traditional midfielders, while wing-backs clearly play an attacking role – so the numbers are arguably skewed when compared with historical data.

In fact, contrary to popular belief, Southgate’s England have been the most advanced upfield of any England team since Opta started recording the data in 1990.

England’s average passing sequence started 44m from their own goal in 2018 – which equates to 10m higher up the pitch than in 2002, and still four metres more advanced than in 2014.

However, defensive robustness clearly remains the primary area of focus for Southgate and, this time out, the manager has reduced the defensive ratio of the squad to 35 per cent.

England’s primary strength is widely considered to be in attack

Despite accusations are England too defensive under Southgate, the current England manager has registered an average goal ratio of 2.12 goals per game.

Kane is leaps and bounds above all other team-mates, netting 51 goals in just 75 games – which equates to a squad-topping 0.68 ratio. The regular wide forwards all record averages of around one goal every four appearances.

Harry Kane could break the all-time scoring record for England goals during the tournament, with his tally of 51 being just two shy of Wayne Rooney.

As referenced, the 28-year-old has notched his haul from just 75 international appearances, compared with Rooney’s 120 caps at international level – which considerably outperforms Rooney’s 0.45 goals per appearance.

Germany striker Miroslav Klose remains the all-time top scorer at World Cups with 16 goals – edging ahead of legends Ronaldo, Gerd Muller, Just Fontaine and Jurgen Klinsmann. Kane remains 10 goals shy of the German, having notched six goals in the competition during his career to date.

You can use the interactive table below to filter or search through all of Kane’s 51 goals, going all the way back to his very first in an England shirt against Lithuania in the European Championship Qualifiers back in 2015.

Gareth Southgate is often accused of being too defensively-minded as England manager. His critics say he is overly cautious with his tactics, using his selection decisions as evidence of his reluctance to unleash England’s true attacking potential.

Those critics see conservatism in Southgate’s squads and it is usually easy to understand why.

At the last World Cup in Russia, his 23-man group included 10 defenders, a higher percentage than in any previous England World Cup squad, dating right back to the 1950 tournament in Brazil.

This year, though, he has gone in the opposite direction, naming only nine defenders despite having the flexibility of an expanded squad, allowing him to take 26 players rather than 23.

He has not gone quite as far as Brazil, including six forwards to Tite’s nine, but his selections suggest he has perhaps noted that recent World Cup-winning squads show little evidence of defensive emphasis in terms of numbers.

Jerome Boateng, Benedikt Howedes and Philippe Lahm all started every game (albeit with the latter sometimes operating in midfield), while Mats Hummels started all but one, and Per Mertesacker started the four out of seven in which Lahm was moved forward.

Spain’s squad in 2010 contained even fewer defenders, with manager Vicente del Bosque including only seven. As it transpired, he used the same back four of Joan Capdevilla, Gerard Pique, Carles Puyol and Sergio Ramos in every single game.

So, more than the need for a range of options in defence, recent World Cup-winning sides show the importance of stability and consistency at the back, suggesting more options further up the pitch could be the more advantageous way to go.

Southgate has decided to take heed.