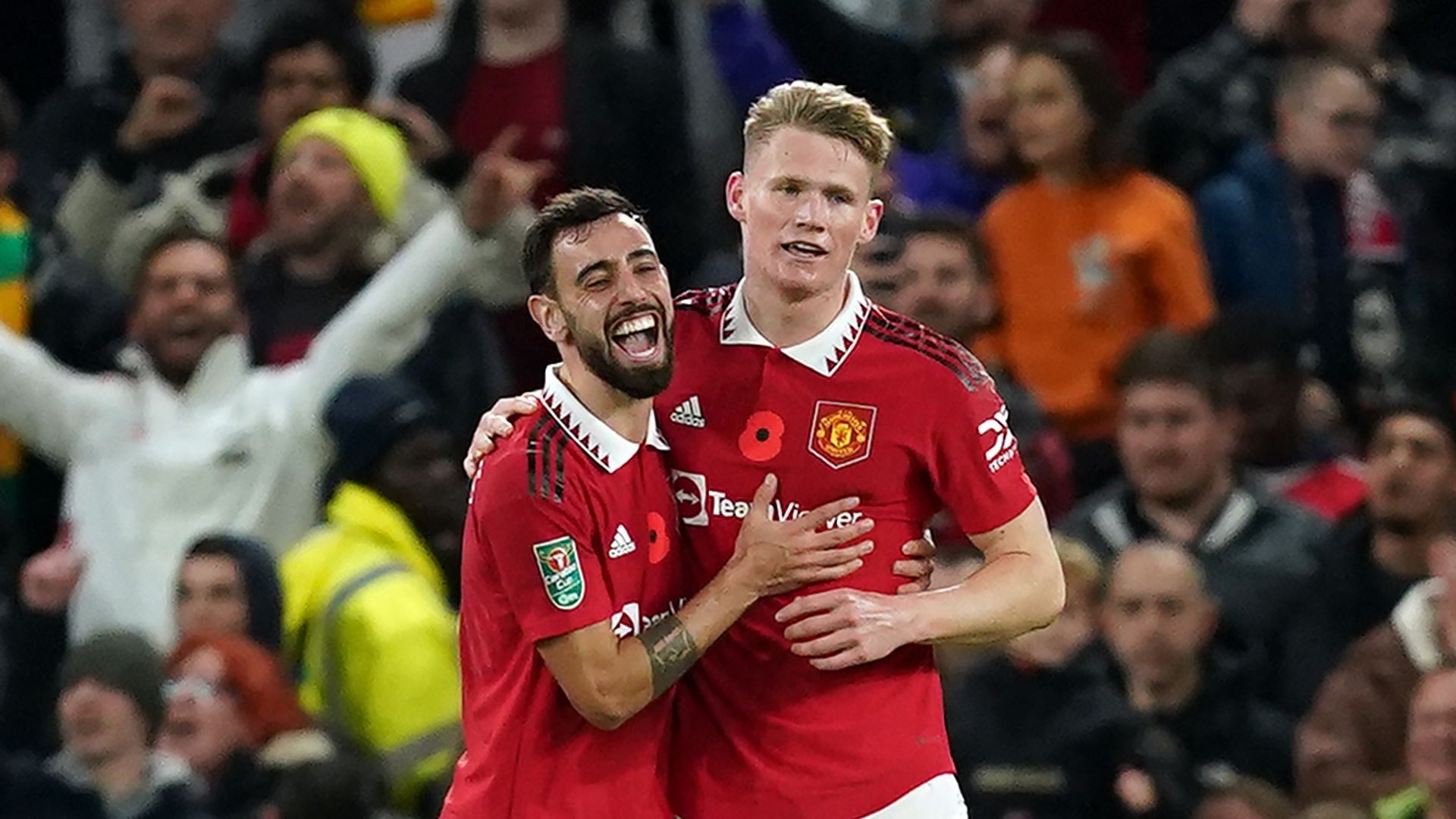 Manchester United came from behind twice to beat Aston Villa 4-2 in a crazy second half at Old Trafford to progress to the last 16 of the Carabao Cup, where they will host Burnley.

All six goals came after the interval with Erik ten Hag’s side falling behind twice before Bruno Fernandes’ deflected strike put them ahead for the first time and Scott McTominay sealed it. The result goes some way to avenging Villa’s 3-1 defeat of United in Unai Emery’s first game on Sunday.

After a dismal 45 minutes, the game came to life after the break with Ollie Watkins opening the scoring before Anthony Martial levelled just 19 seconds after the restart. Diogo Dalot’s own goal restored Villa’s advantage but then Marcus Rashford found another equaliser.

Fernandes, suspended when the teams met at Villa Park at the weekend, turned the game on its head amid a raucous Old Trafford atmosphere and McTominay ended any hope of a comeback.

United’s fourth-round tie will also be at their home ground, with their clash with Vincent Kompany’s Championship side Burnley scheduled for the week of December 19.

How Man Utd turned it around

It was a turgid first half in which the only excitement came from Douglas Luiz trying in vain to score from his corner kicks and Bruno Fernandes shooting from 40 yards out from near the touchline. The pace of the game was slow and the thinking of the players was slower.

And then came the second half. Luiz won the ball back in midfield – shades of handball there – and Jacob Ramsey fed Watkins. The striker, having missed out on England’s World Cup squad, then showed real composure to dink the ball over debutant Martin Dubravka. 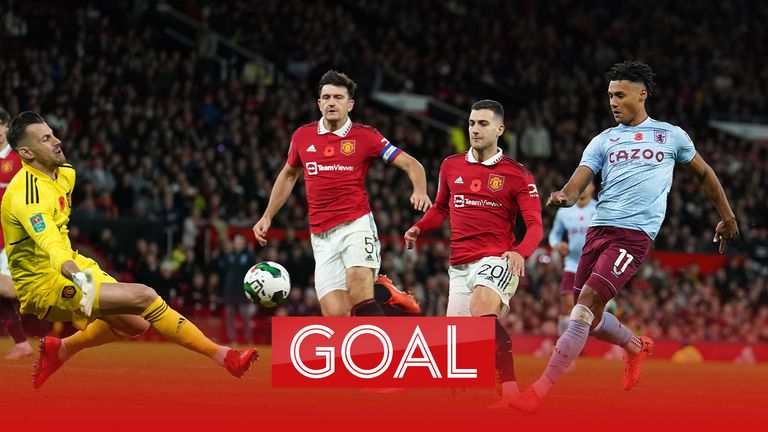 The large away following were still cheering when the equaliser went in. Fernandes, returning to the side following his suspension, raced away down the right and his square pass left Martial with the simple task of slotting the ball beyond Robin Olsen. 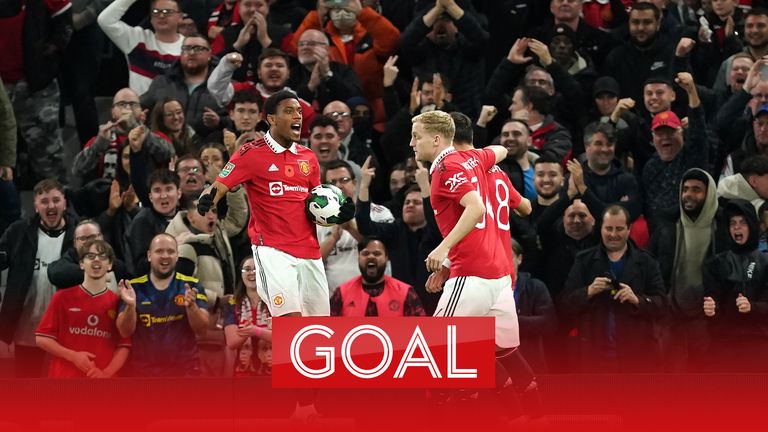 That was only the start of the drama, suddenly these five-time winners of this trophy were playing like they wanted to be in the competition. Ashley Young’s teasing cross found the head of substitute Leon Bailey. Dalot diverted the nod down into his own net. 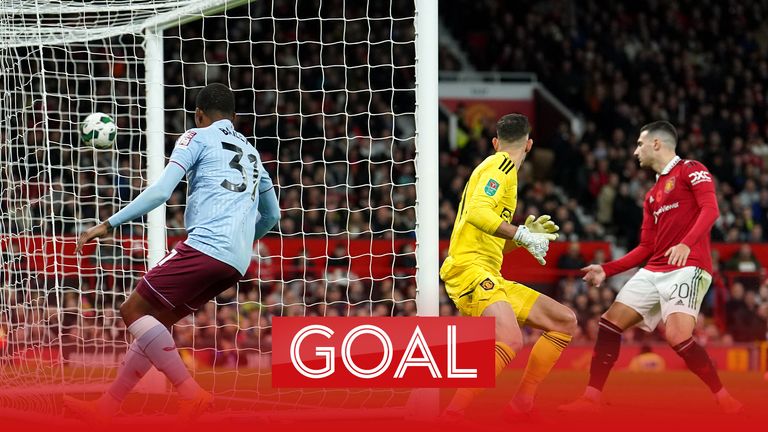 This time Villa led for six minutes before Rashford found the equaliser, beating a scrambling Tyrone Mings and the goalkeeper. Old Trafford erupted once more and Olsen found himself having to save again from Rashford and from Harry Maguire. United laid siege. Olsen had some good moments but the Villa goalkeeper looked shaky throughout and was culpable for the third United goal, his stray pass allowing Fernandes through. The shot deflected off Mings and this time there would be no twist in the tale. 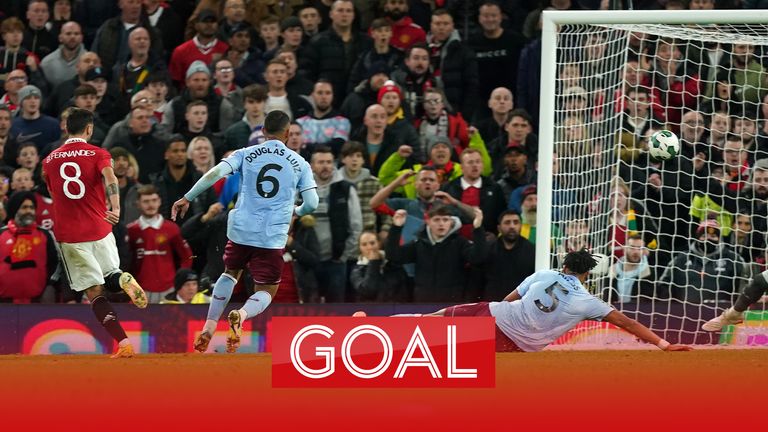 Alejandro Garnacho, lively after coming on as a substitute, provided the glorious pass for McTominay to beat Olsen from close range and United were into the last 16. It was not an easy night’s work but it a was deserved win based on the ferocity of their attacking in the second half. 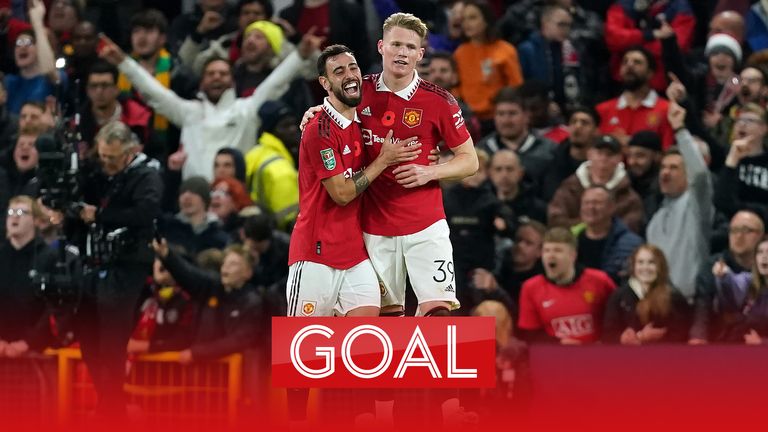 The two goals conceded are the only ones that Ten Hag’s team have allowed in their last six home games. Though Villa are a team whose only away win this season came earlier in this competition against Bolton, their supporters will be encouraged that they are playing with purpose again under Emery.

The big positive for United is that – with Cristiano Ronaldo missing through illness – they were still able to score four goals to win the tie. This competition has opened up a little with Chelsea, Arsenal and Tottenham going out. After five seasons without a trophy, there is hope again.

Ten Hag: ‘We are in the right direction’ 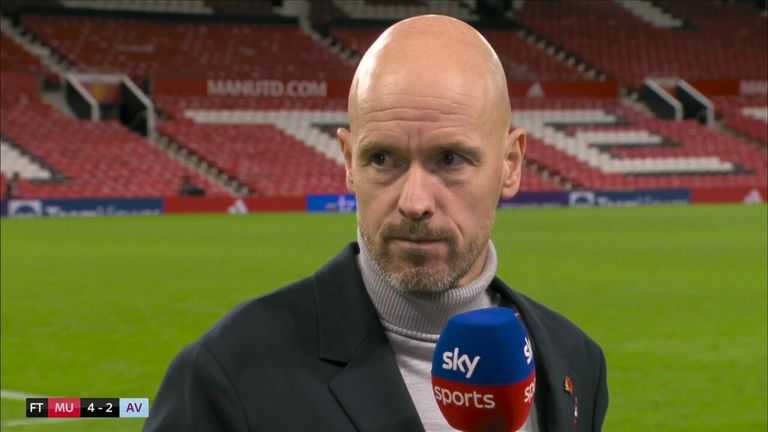 “First half we controlled the game by good pressing, we won a lot of balls in the opponent’s half but then we did the wrong things,” Ten Hag told Sky Sports. “We were really bad in transition, missing the pass. We missed a lot of opportunities in the first half. Then in the last seven or eight minutes we were sloppy on the ball.

“At half-time we said keep the pressing but be more direct with passing behind their defence. Then we fight back and I’m really proud of the team that they can do that after Sunday’s defeat, after two times they’re down.

“They play with a high line. Pass the ball behind. We were quite successful with that in the second half.

“The problem in the first half was we had too many touches and missed the moment to pass the ball behind. That’s why we brought Eriksen onto the pitch. 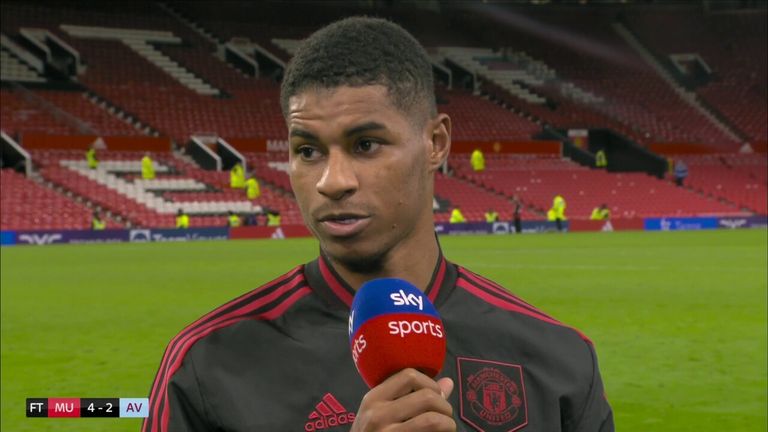 “I’m really happy with the resilience. That’s why I was so disappointed – I was really mad on Sunday with the performance from us because we didn’t fight. We were sloppy, especially in the defensive discipline. A United player always has to show 100 per cent discipline.

Garnacho, the 18-year-old winger from Argentina, helped to turn Young inside and out and the game in United’s favour with the crowd urging him on. Ten Hag was asked about the teenager in his press conference, speaking with humour and caution about the future.

“I think it was good that when he came on that he showed a performance, that he had an impact on the game with two assists, some dribbles, some runs in behind,” said Ten Hag.

“But [there were] also some things he has to improve. For instance, when you are going for a long ball don’t go into a header with Scott McTominay, go for the second ball. He has things to learn but it is quite obvious we are really happy with his development and performance tonight and he can contribute to this team.”

Asked if Garnacho could become a regular this season, he added: “It depends on how his approach is, how his attitude is. When he keeps working, keeps this attitude, then it is possible.

“If he keeps this attitude, wants to improve every day, and he does the right thing in his lifestyle, yeah, then it is possible because you see he has the capabilities to contribute to attacking football and also he can break open a really compact defending line.

“He wants to play in the opponents’ half. All teams need players like that, he can outplay them and also in the final decisions he can do the right things. Also can he do the defending stuff and the discipline? If he can do that then it is possible.”

Emery: ‘We lost our mentality’

“We competed I think very well and we were having chances to keep for 90 minutes with the spirit and with good balance defensively and offensively,” said Emery afterwards.

“And the last 15 minutes was the moment we lost a bit of our mentality that we were showing. It is for us to improve and work on in these days before the match against Brighton.

“I learned a lot because each player they gave me a lot of information about their performance. But I was not 100 per cent happy with the performance we were doing on Sunday. Both games there were more good things than bad. The worst moment of those two matches were the last 15 minutes.”

Manchester United complete their Premier League schedule before the World Cup with an away game against Fulham at Craven Cottage this weekend. That is live on Super Sunday from 4pm, with kick-off at 4.30pm.

Aston Villa are also on the road down south, and also in Super Sunday action. They face a difficult assignment away to Brighton. That is from 1pm, with kick-off at 2pm.