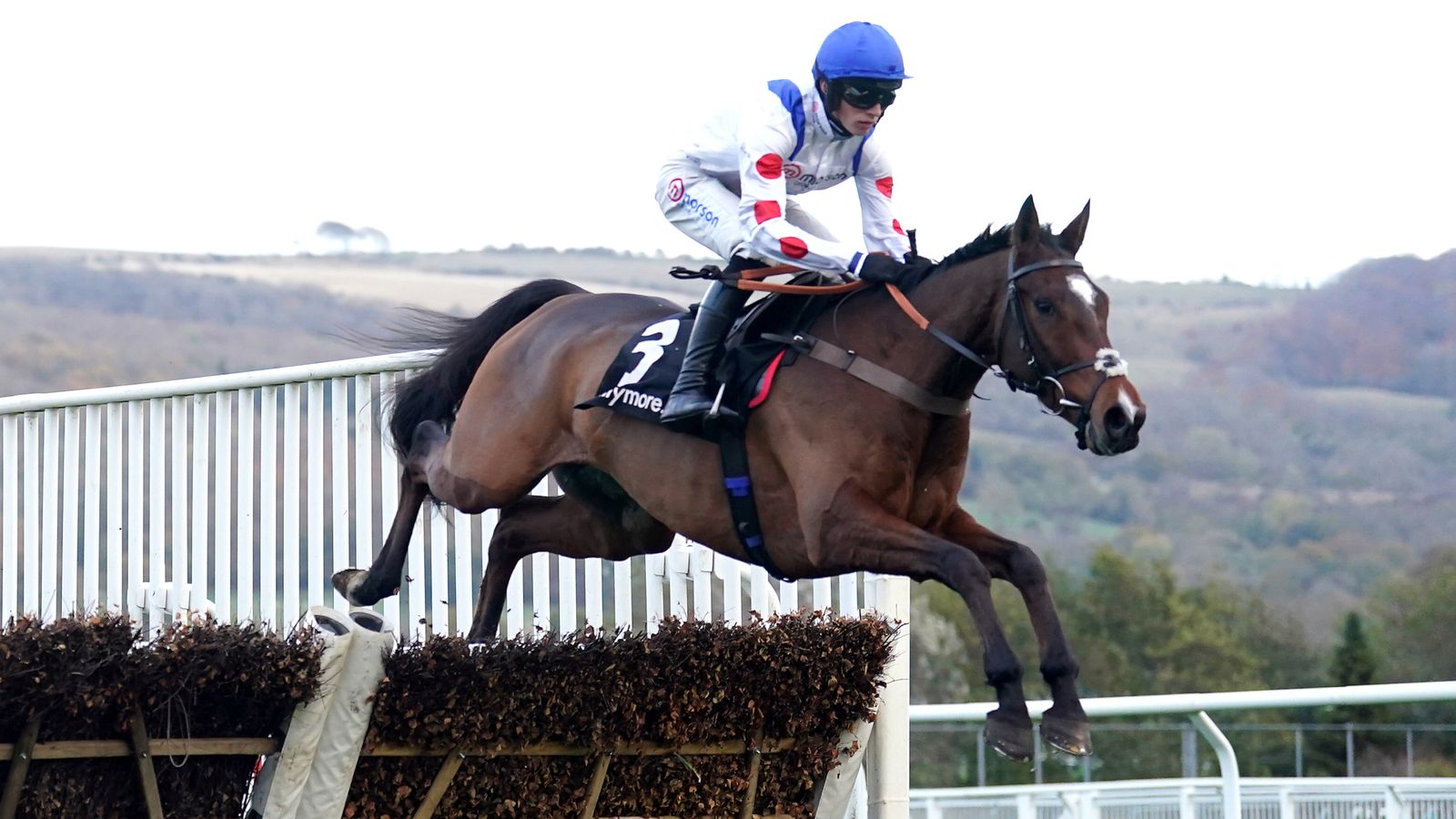 Hermes Allen put up a sparkling performance to remain unbeaten since joining
Paul Nicholls in the Ballymore Novices’ Hurdle at Cheltenham.

Bought for £350,000 having won an Irish point-to-point, he was a facile winner on his debut for Nicholls at Stratford in October.

This Grade Two represented an altogether different test, however, as both Willie Mullins with Hubrisko and Gordon Elliott in the shape of Music Drive were represented – along with Nigel Twiston-Davies’ promising bumper winner Weveallbeencaught.

Sent off a 9-4 chance, Harry Cobden was keen to make it a real contest on the five-year-old and ensured a decent pace throughout, but coming down the hill racing towards the second-last the Irish challengers loomed large.

Nicholls can do little wrong at present, though, and Paul Townend was soon off the bridle on Hubrisko and fading while Music Drive could not get on terms either.

Hermes Allen bounded clear to win by nine lengths and Sky Bet cut the winner to 10/1 for the Ballymore in March.

“Obviously he had a big price tag and everyone thought he was good, so I was a little bit worried at home and then he went to Stratford and surprised us and won as he did. Bryony (Frost) said there he is a decent horse, he is just green and babyish.

“Since that day at Stratford to now, he’s improved and improved, the way he has worked, the way he has jumped, everything. He is obviously just an improving young horse who is maturing and had got into our routine and he’s doing well.”

He went on: “The Challow is a race I like winning, we have a few who can possibly go, but you’d possibly run the best one in that. The guys (owners, who also include Ged Mason and Sir Alex Ferguson) would love to come back in the spring here and it might be he is good enough. He would get three miles on good ground or a bit slower, I suppose we can go that sort of trip.

“He is an exciting horse and will be an exciting chaser. There are a few who will improve from their first run, but he has taken a big step forward.”

He added: “We changed the feed this year and tweaked a few things and it has helped. They look great and are running all the way to the line.

“We’d been on a feed for five years and sometimes I think you need a change. The last year I was never happy that the horses looked great and we had a spell in the season where they all ran terrible and I never found out why. To me, I’d worked out it could only be one thing in my mind, so we changed it and it has been the best thing we ever did.”

Joe Tizzard has been in the Cheltenham winners’ enclosure as a jockey and an assistant trainer – and now following the success of Amarillo Sky on Friday he has celebrated victory as a trainer in his own right.

“It’s great to win here. Cheltenham has always been a place I’ve loved and we have loved as a family,” Tizzard said.

“He stuck at it very well. He is a proper two-miler. We will pick our way and he is a nice, progressive horse, who proved today he is just on the right side of the handicap and hopefully he’ll keep improving.”