Is Jesus’ goal drought a real worry for Arsenal? 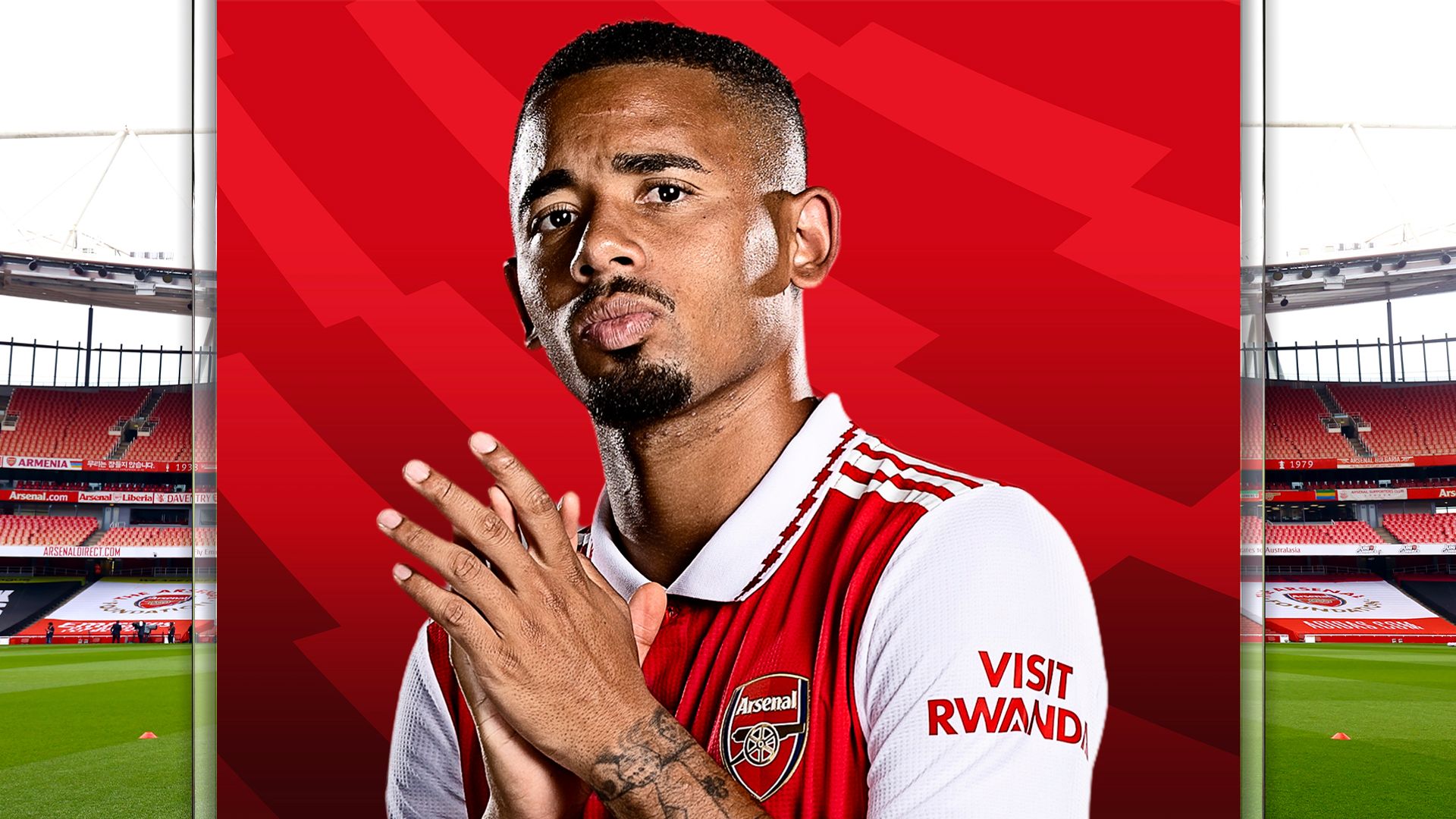 “To be with the top teams, you need to score 90 to 100 goals at least,” said Mikel Arteta. “Somehow, you need those goals in the team. Don’t ask me how, but you need them.”

Arteta was speaking after a 2-0 loss to Liverpool in March. At the time, Arsenal had scored 43 goals in 27 Premier League outings at a meagre rate of roughly 1.6 per game. The lack of cutting edge would eventually cost them a top-four finish.

Fast forward to today and Arsenal’s output is transformed. With 31 goals from 13 Premier League games, their average has leapt to 2.4 per game, propelling them to the top of the Premier League and putting them on track to surpass the 90-goal mark.

Conversely, it has a lot to do with a striker who has failed to score in his last 10 appearances in all competitions. Gabriel Jesus may not be finding the net himself right now, but he has taken Arsenal to an altogether different level as an attacking force. 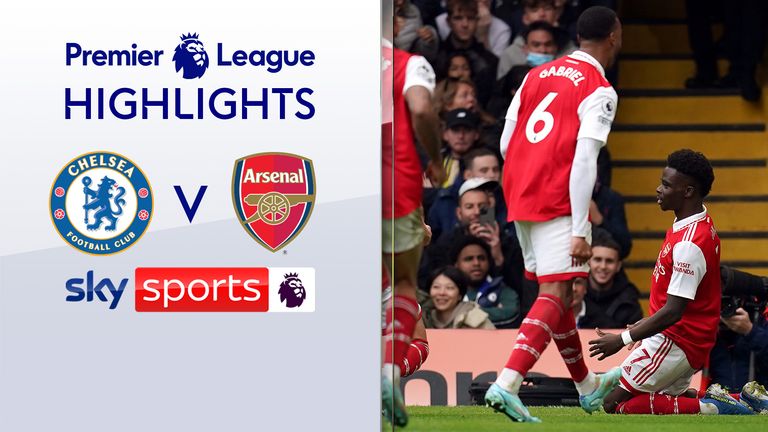 FREE TO WATCH: Highlights of Arsenal’s win over Chelsea

If there could be one complaint about Arsenal’s 1-0 win over Chelsea on Sunday, it is that the scoreline did not accurately reflect the extent of their dominance. Arteta’s side registered 14 shots to Chelsea’s five worth 2.25 expected goals to 0.29.

Jesus was responsible for one of their most glaring misses, heading wide from Gabriel Martinelli’s cross in the first half, and it was not the first instance of wastefulness lately.

Jesus scored five goals in his first eight appearances for Arsenal following his £45m arrival from Manchester City in the summer but his drought now runs to 686 minutes in all competitions.

A lack of killer instinct in front of goal became a theme of Jesus’ time at City. There were 58 Premier League goals in 160 games in total, but he underperformed dramatically relative to his expected goals, his chances in fact worth a projected total of over 70.

Only Christian Benteke recorded a higher negative difference between expected goals and goals scored during that period and a similar trend is now evident at Arsenal.

Jesus ranks fourth in the Premier League in terms of expected goals this season. He ranks even higher, in second, if you take out penalties. And yet his total of five scored puts him 14th.

Only four players – Patrick Bamford, Danny Welbeck, Jarrod Bowen and Solly March – have been more wasteful with their finishing, according to the underlying numbers.

Is he simply reverting to type?

Jesus’ scoring record at City looks particularly modest at a time when Erling Haaland is finding the net at such an extraordinary rate, but it is worth noting that it appears far more impressive when excluding substitute appearances.

Jesus scored 53 goals in 99 Premier League starts for City. While he was undoubtedly wasteful at times, a lack of consistency in terms of playing time, preventing him from building rhythm and confidence, was a bigger issue.

The situation is of course very different at Arsenal, where he is starting every Premier League game, and while his scoreless run is of course a source of frustration, a far bigger worry would be if the opportunities were not coming his way at all.

“I don’t think there is any suggestion the drought will go on too much longer because Arsenal do create so many chances,” former Arsenal striker Alan Smith told Sky Sports News last week.

“He is just snatching at things at the moment. It’s that attitude when you haven’t got a goal, you get a bit overanxious… The goals will come.” Arteta added: “He just needs to be patient.”

It is of course a skill in itself to put yourself in scoring positions so frequently, even if the chances are too often missed, but most significant with Jesus is that he is giving Arsenal so much else.

His arrival has totally transformed their penalty-box threat, the Brazilian international having, by a considerable distance, the most touches in the opposition area in the Premier League this season.

But his dynamism is such that he is also wielding huge influence in other parts of the pitch, linking the play in midfield, helping Arsenal pin opponents back and setting up chances for his team-mates.

It can be seen in his creative output. There have been five assists in the Premier League so far, more than any other striker, while only five players have created more chances from open play.

His ability to drag defenders out of position and create space for others has proved invaluable. Either side of him, Bukayo Saka and Gabriel Martinelli have been more effective than ever. The same is true of Granit Xhaka and Martin Odegaard.

Jesus has facilitated this improvement, at times through his intelligent off-the-ball runs, selflessly drifting towards the flanks for the benefit of others, and at other times through ball-carrying.

Jesus ranks third in the Premier League for successful dribbles this season, behind only Bournemouth’s Marcus Tavernier and Crystal Palace’s Eberechi Eze, while only one player, Eze’s Palace’s team-mate Wilfried Zaha, has won more fouls.

Increasingly, Arsenal’s opponents are finding themselves having to double up on Jesus, allowing him to draw more defenders towards him. His unpredictability is causing chaos in opposition defences and Arteta’s side are suddenly threatening from all angles.

That much is evident in the sheer number of players contributing goals.

Arsenal have had 10 different scorers in 13 Premier League games this season. They are the only side in the division with five players to have hit three or more goals in the competition.

Jesus will of course feel his own total should be higher but nobody has been more important to their collective improvement as an attacking force this season.

Beyond the assists Jesus has provided and the chances he has created, there is the fact that only four Premier League players – Kevin De Bruyne, Bruno Fernandes, Mohamed Salah and Harry Kane – have been involved in more attacking sequences.

He is not always the man on the end of those sequences, but as long as Arsenal’s goals continue to flow, and Jesus’ all-round influence remains so pronounced, it is little cause for concern.

Defending from the front

Jesus is playing a crucial role in a defensive sense too, his energy, work-rate and off-the-ball intelligence allowing Arsenal to press far more effectively in their attacking third. 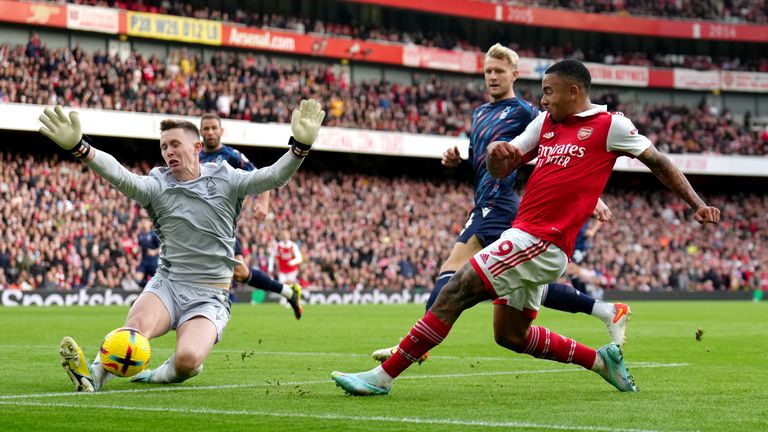 They may appear relatively minor changes but they have made a significant difference and it is largely thanks to Jesus, whose contribution can be seen in the number of tackles he is making.

In total, he has made 18 – seven more than any other striker in the Premier League and, for further context, the same number as Arsenal centre-back and namesake Gabriel Magalhaes.

Many of those tackles, such as the one to dispossess Thiago Silva in the build-up to the corner from which Arsenal scored the winner against Chelsea on Sunday, have come high up the pitch, but his defensive contribution does not end there.

Often, he can be seen tracking back as far as his own box, nipping in to steal the ball off unsuspecting opponents deep in Arsenal territory, helping to launch counters and providing yet more evidence that he offers so much more than your average striker.

Crucially, Jesus’ talent for pressing – Pep Guardiola once called him the best pressing forward in the world – and winning the ball high up the pitch has, together with the introduction of William Saliba, whose recovery pace provides security at the other end, allowed Arteta to move their defensive line higher.

Arsenal ranked sixth last season in terms of start distance, a metric which measures how far from their own goal a team’s passing sequences begin. Now, however, they sit third, their average jumping from 42.3m to 43.7m this term.

That high line is helping Arsenal suffocate opponents, with Sunday’s game against Chelsea just the latest in which they have defended a lead by pushing forwards, rather than sinking into their own half as they so often did last season.

But the approach is not possible without pressure on the ball high up the pitch and that is just another quality Jesus is providing.

He might not be scoring Arsenal’s goals himself right now, but it is largely thanks to him that they are flowing.