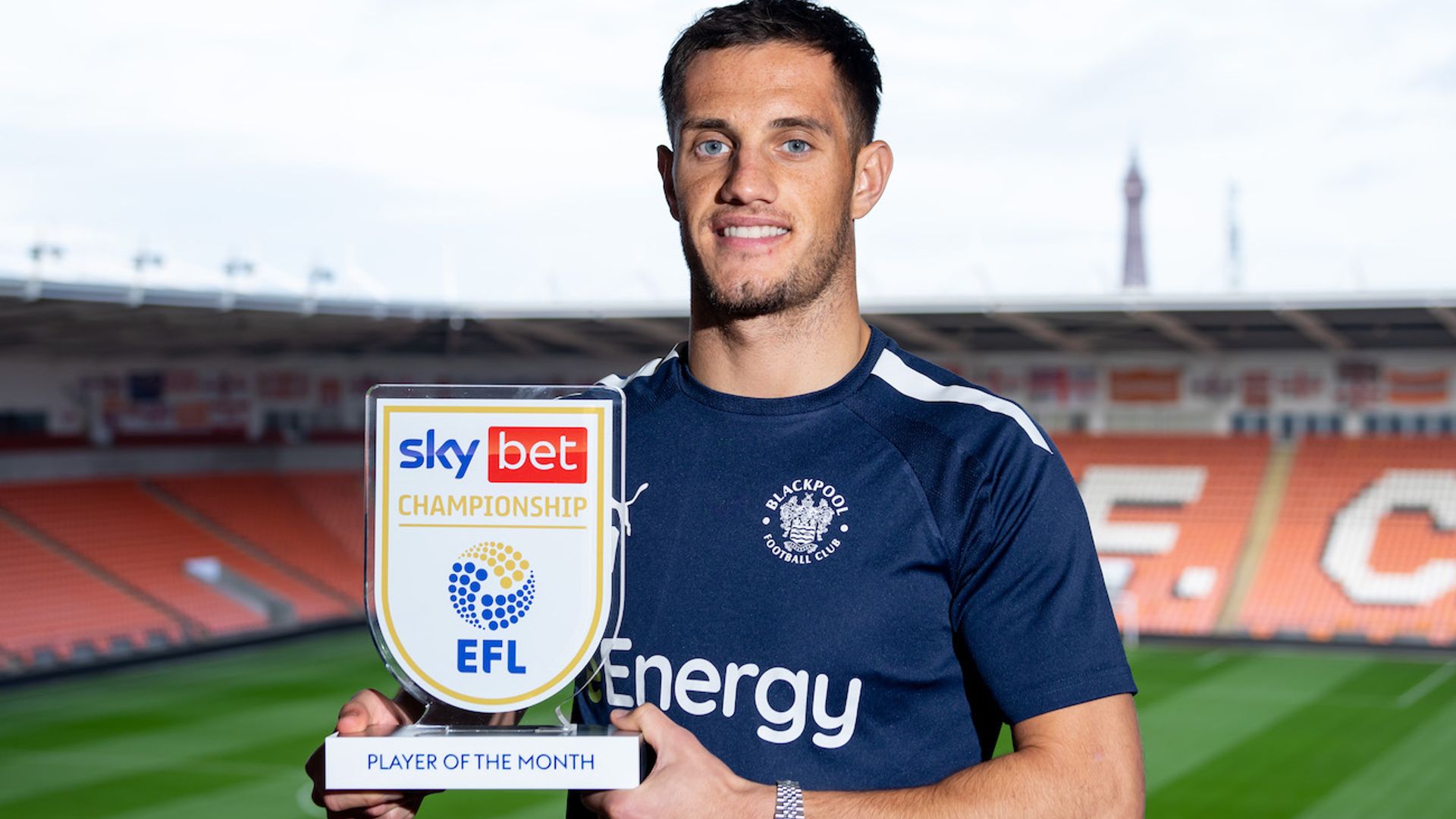 Blackpool striker Jerry Yates has been named the Sky Bet Championship Player of the Month for October.

An October for the ages for Yates owed much to his clever positioning. There were three doubles among his seven goals and an assist in seven games, which included four headers, two volleys and a jinking solo run against Watford.

Yates said: “It’s a nice feeling to win this award. This is the first one I’ve won, and I appreciate the panel voting for me. October was a bit surreal for me. I don’t think I’ve previously scored seven goals in a month during my career.

“Without my team-mates, I don’t think I’d have scored any of them. They play a major part in it, and I thank them every day. We have a great bunch of lads here who work hard for each other, and we just want to kick on again now and do our very best for the fans.”

Burnley manager Vincent Kompany has been named the Sky Bet Championship Manager of the Month for October.

If October began with Kompany’s flowing side continuing to concede late equalisers, it ended with deserved injury-time winners and two comeback wins as they amassed 18 points from eight unbeaten games and moved top of the Championship.

Kompany said: “I’m delighted to win this award, up against some great managers.

“I would like to thank all the players and my staff; the coaches, physios, sports science, analysts, kit men, groundsmen, chefs and everyone else who played a part in achieving this award. It was a good month for us, but the hard work continues.”

Bristol Rovers striker Aaron Collins has been named the Sky Bet League One Player of the Month for October.

The dynamic striker is having a stellar season. Three goals and three assists were his official tally, but his driven finishes and superb crosses were supplemented by countless runs off the ball and a goal-creating dummy at Sheffield Wednesday.

Collins said: “I’m happy to win it after being nominated in August with the same amount of goal involvements. It could’ve been four assists, but it obviously wasn’t to be.

“But like I said, it’s been a really good month as a team, as well as individually, so I’m happy and hopefully I can add to that goal and assists tally in the coming months!”

Plymouth Argyle manager Steven Schumacher has been named the Sky Bet League One Manager of the Month for October.

There is a symbiotic serenity about Schumacher’s fit with his Argyle side. He has a happy squad, players giving their all for each other and emerging with a result every time, as 19 points and 18 goals from seven unbeaten games prove.

Schumacher said: “I am delighted to win the Manager of the Month award for the second month in a row. We have had a brilliant start to the season, and for us to be sitting at the top of the table in an incredibly competitive Sky Bet League One just shows how well everyone connected to Plymouth Argyle is doing at the moment.

“We will continue to work as hard as we possibly can to keep getting results, and hopefully be in contention to win some more of these awards in the future. A big thank you once again to all of the players and coaching staff for their hard work in October and a special mention to our fans whose support has been incredible!”

Stockport County striker Paddy Madden has been named the Sky Bet League Two Player of the Month for October.

With his work rate and determined harrying of defenders, Madden gives Stockport more than just goals, but his poacher’s knack is priceless. He contributed either a goal (five in total) or an assist in every one of County’s six games.

Madden said: “I’m delighted to be able to win the Sky Bet League Two Player of the Month award. It’s always nice to receive individual praise but a big well done has to go to all my teammates and the staff at the club.

“Without their great performances over the last month, winning an award like this wouldn’t have been possible so I just want to say a big thank you to them.

“Obviously the focus now is on keeping this run that we’re on going, making sure we have a good November and keep pushing up the league table.”

Walsall manager Michael Flynn has been named the Sky Bet League Two Manager of the Month for October.

Any Walsall fans worried by a winless September and a mounting injury list had those doubts swept away as Flynn guided his side to 14 points from seven games, which included winning all four home fixtures by an 8-2 aggregate.

Flynn said: “I’m delighted to have won the award. I want to thank all of my staff, it’s a real team effort from Mandy the chef, the groundsman, Trivela, Leigh Pomlett and the fans. A special thank you to Wayne Hatswell who has been by my side for every one of the Manager of the Month awards I’ve won.

“After a bad September where I do feel we were playing some decent football, we just didn’t get the results we deserved but I believe in the players and it’s down to them that we’ve won Manager of the Month.”