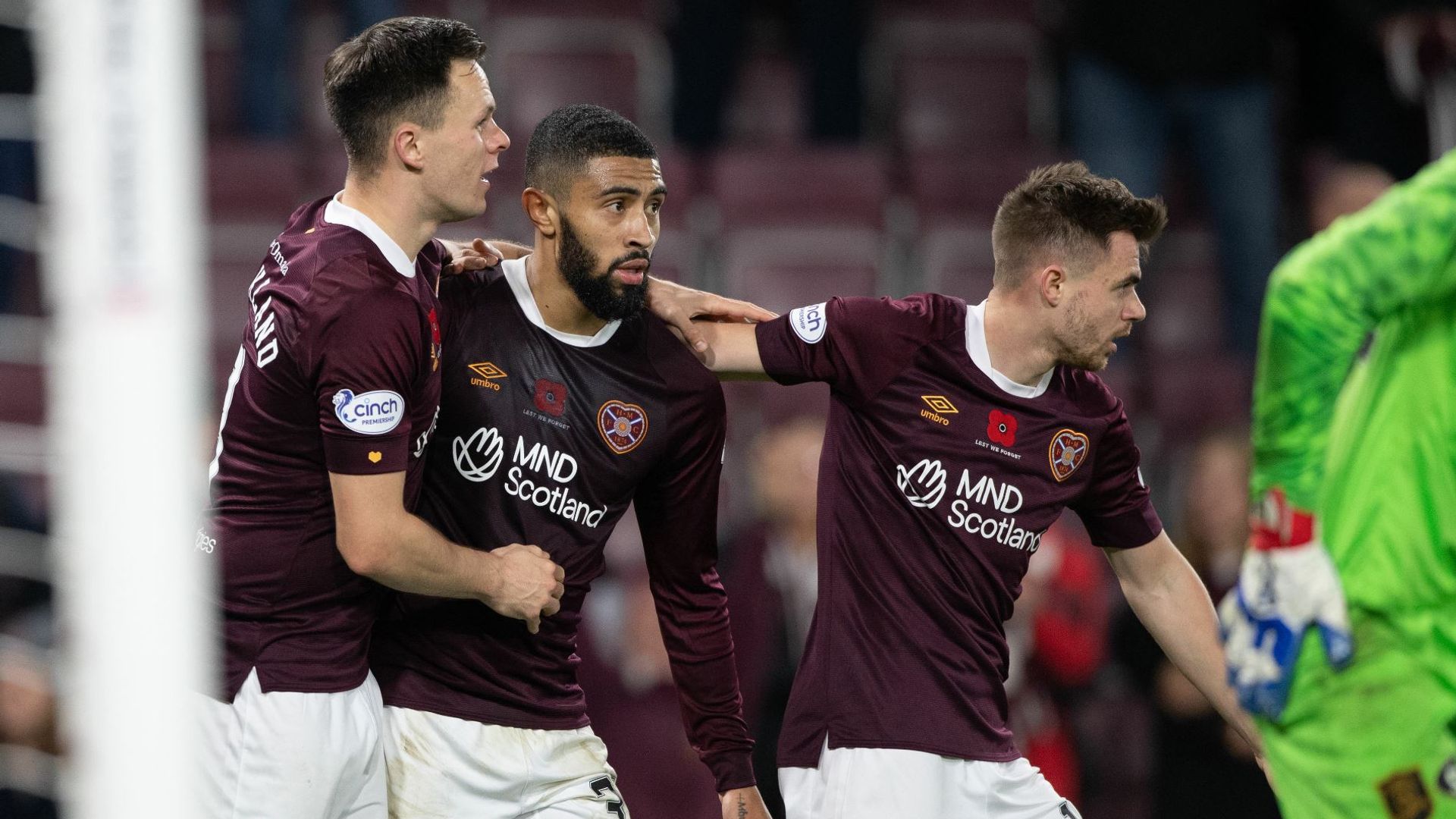 Josh Ginnelly scored a dramatic stoppage-time equaliser as 10-man Hearts fought back to claim a 1-1 draw at home to Livingston.

The Lions looked on course for a third cinch Premiership win on the spin when the hosts had Kye Rowles sent off following a VAR review while the visitors were leading through Stephen Kelly’s 55th-minute strike.

But Hearts – reliant on a brilliant penalty save from Craig Gordon immediately after Rowles’ red card to keep them in contention – struck with virtually the last kick of the game, prompting manager Robbie Neilson to race onto the park in celebration.

Neilson had initially made two changes to the Jambos side that started Wednesday’s 1-0 defeat away to Rangers, with Orestis Kiomourtzoglou and Barrie McKay replacing Cammy Devlin and Nathaniel Atkinson.

However, Devlin was restored to the starting XI shortly before kick-off after Andy Halliday suffered an injury in the warm-up.

Livi had a half chance in the second minute when a free-kick from the left broke to Stephen Kelly eight yards out but he was unable to get enough power on his shot to trouble Gordon.

After some patient build-up play, Hearts created a great opportunity in the 11th minute when Alex Cochrane ran on to a McKay pass down the left and whipped in a low delivery but Lawrence Shankland blazed his shot over from 10 yards.

The Jambos threatened again two minutes later when Devlin lifted a pass over the top for Ginnelly to run on to but Konovalov – making his first league appearance of the season – raced from his goal and raised a strong hand to stop the winger dinking the ball over his head.

The hosts were enjoying the bulk of the pressure and they had another opportunity in the 39th minute when Konovalov could only push McKay’s low driven cross out into the danger area but Shankland – following up – was crowded out as he tried to force it into the net.

Two minutes before the break, Shankland saw his angled effort brilliantly saved by Konovalov after the striker was picked out inside the box by a lovely diagonal pass from Cochrane.

Livi threatened in the last action of the first half when Jack Fitzwater saw a goal-bound header nodded off the line by Ginnelly following a Sean Kelly corner.

The Lions went close again four minutes after the restart when Shinnie fizzed a low angled shot just beyond the far post from 20 yards.

They took the lead after 55 minutes when Shinnie outmuscled Cochrane on the right and slipped the ball into the path of Stephen Kelly, who stepped away from his man before driving a precise low finish past Gordon from the edge of the box.

Hearts almost found a way back into the game in the 72nd minute when Rowles headed Cochrane’s in-swinging cross against the crossbar.

Two minutes later, however, the Australian defender was sent off after he was deemed to have tugged the shirt of Joel Nouble in the box following a VAR review.

The Hearts players were incensed but they got some reprieve when goalkeeper Gordon dived to his right to save Sean Kelly’s penalty.

They took advantage as they equalised with virtually the last kick of the game when Ginnelly pounced on a loose ball just inside the box and thundered home a ferocious strike to rescue a point.

Hearts boss Robbie Neilson: “It was a shambles, to be honest,” he said. “We’ve got this period (the World Cup break) and hopefully it gets ironed out a wee bit.

“You don’t need three, four minutes to check every single decision. It needs to be done a lot quicker.

“You can watch a video and within one, two, potentially maximum three minutes you can make a decision and it gets fired back but we’re stopping the game for everything and it’s taking two, three, four minutes.

“It’s got to get better because that’s going to kill football.

“In English games, they continue to play the game while they’re checking the decisions and they’ll tell the referee but for some reason we’re stopping everything and it’s just killing the game.”

“There were a couple of big decisions that I’m disappointed VAR never asked the ref to have a look at,” he said.

“The challenge on Nicky from Cochrane, how he doesn’t get asked to look at it on the monitor I’ll never know. I am actually getting to the stage where I don’t know how the game is being reffed.”

Asked about the alleged handball in the lead-up to Hearts’ goal, Martindale said: “Apparently it was accidental, let’s just say I don’t think it was.

“I think it should be pulled back and the goal shouldn’t be given.”

The Scottish Premiership takes a break for the World Cup with Hearts returning to action on 17 December at home to Kilmarnock.

Livingston host Dundee United on the same day. Both games kick-off at 3pm.