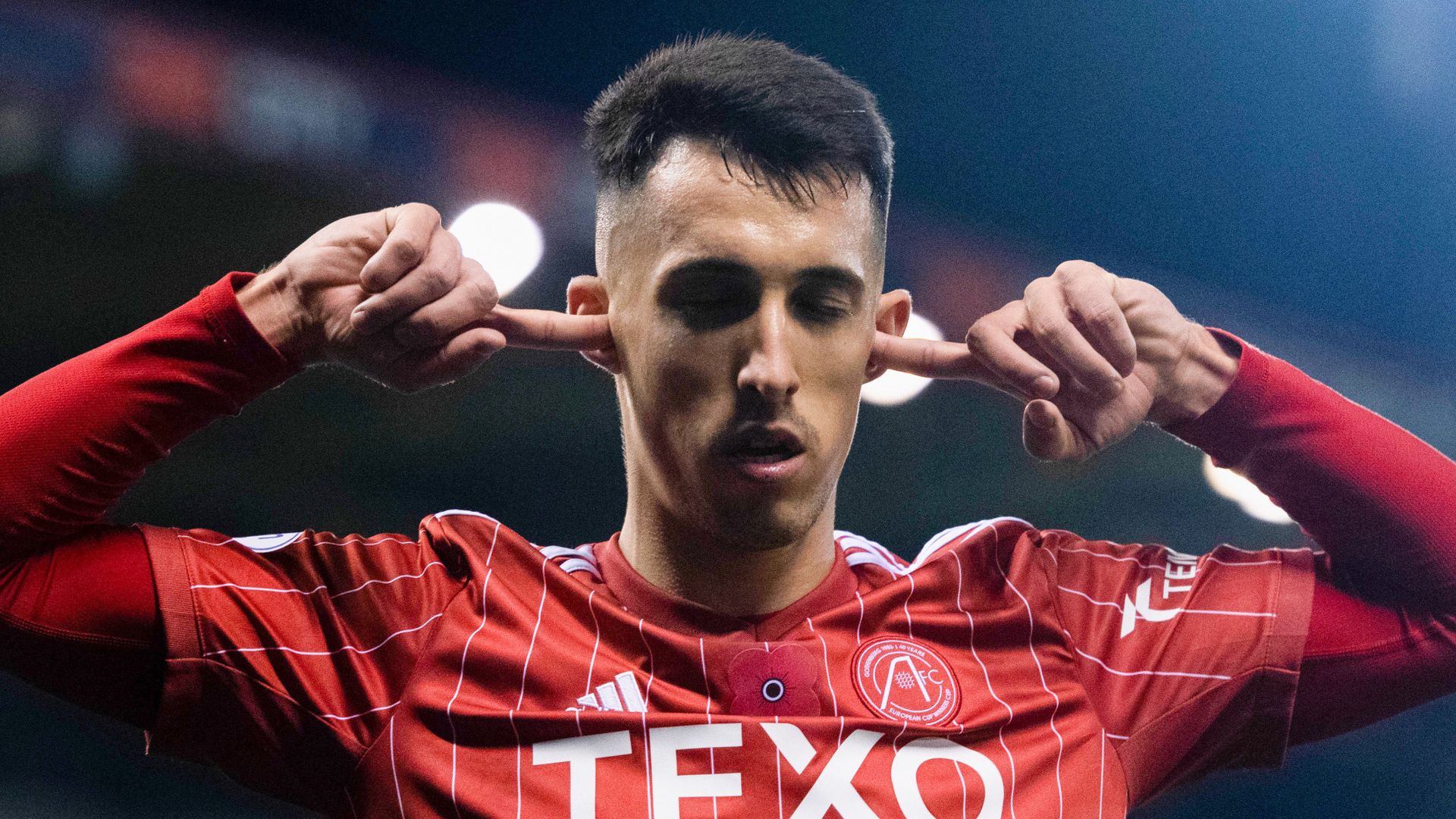 However the home side had to survive a second-half onslaught to earn the three points from a rare Saturday evening outing.

The opening period was even, with Matty Kennedy blasting over the bar from Aberdeen’s first chance, while – at the other end – a speculative Glenn Middleton effort deflected wide of the post off Ross McCrorie.

But as Aberdeen settled into the game, they began to play round the visitors defence, and although not creating much in the way of clear-cut chances, they were certainly looking the most dangerous.

The key moment came 10 minutes before the interval and it was the result of good link-up between the Dons front two.

Miovski showed superb footwork to create an opening and he slid a pass to Luis ‘Duk’ Lopes. The Cape Verde international seemed to be going away from goal but was pulled down by goalkeeper Mark Birighitti, and referee Willie Collum had no hesitation pointing to the penalty spot.

Miovski stepped up and comfortably converted, firing low to the left as the goalkeeper went the wrong way, showing no hangover from his saved spot-kick against Livingston in midweek.

Aberdeen could have been two-up before the interval as Duk latched onto an awkwardly-bouncing ball to loft over Birighitti from the corner of the penalty area, only to see his effort bounce away from goal at the far post.

The Dons could have doubled their lead early in the second half as a Matty Kennedy corner found the unmarked McCrorie at the near post, but he could only steer an effort into the side netting.

Another corner five minutes later saw Liam Scales head back across goal for McCrorie, who this time saw his effort cleared by Kieran Freeman.

But the visitors came back into things, with Steven Fletcher’s far-post volley going high and wide, before the same player saw a header saved by Dons goalkeeper Kelle Roos.

Roos was in action again to push Ross Graham’s volley from the edge of the area over the crossbar as the visitors piled on the pressure.

But it was the home side who could have sealed the points with three minutes left. Good work from Duk set Kennedy away, but with the option of a ball back to the striker or shooting, the Northern Ireland international blasted wide of the target.

“I’m delighted with the end result. If you’d offered me a scrappy 1-0 win before the game, I’d certainly have taken it.

“I thought the first 45 minutes we dominated large periods and probably should have added to our lead. The second 45 we were happy to give up a bit of territory because of the pace we could see Dundee United had in their side.

“It’s something we’ve been criticised for in the past, being too open. We decided to sit off a bit and see if United could break us down.

“The attacking players have received many plaudits for their creativity, but today was a different type of performance. We had to grind out a result and we managed to do that.”

He said: “We well know we’re here for points. I understand it’s easy for me to say and that the supporters will be disappointed going down the road, but not as disappointed as we are.

“There was a lot of positives from the performance. If we keep performing to that level, to that standard, then we will start to pick up points on a regular basis.

“Aberdeen are a good side and I think we pushed them all the way today. Everybody can beat everybody in this league as shown on a weekly basis. We know where we are and where we need to get to.

“I have no complaints about the penalty. We need to be tidier in possession and take opportunities to break up the play when we get them.”

The Scottish Premiership takes a break for the World Cup with Aberdeen returning to action against Celtic on December 17, live on Sky Sports. Kick-off 12.30pm.

Dundee United are away to Livingston on the same day. That game kicks off at 3pm.