‘She wants Taylor, she wants Shields!’ What’s at stake for Jonas? 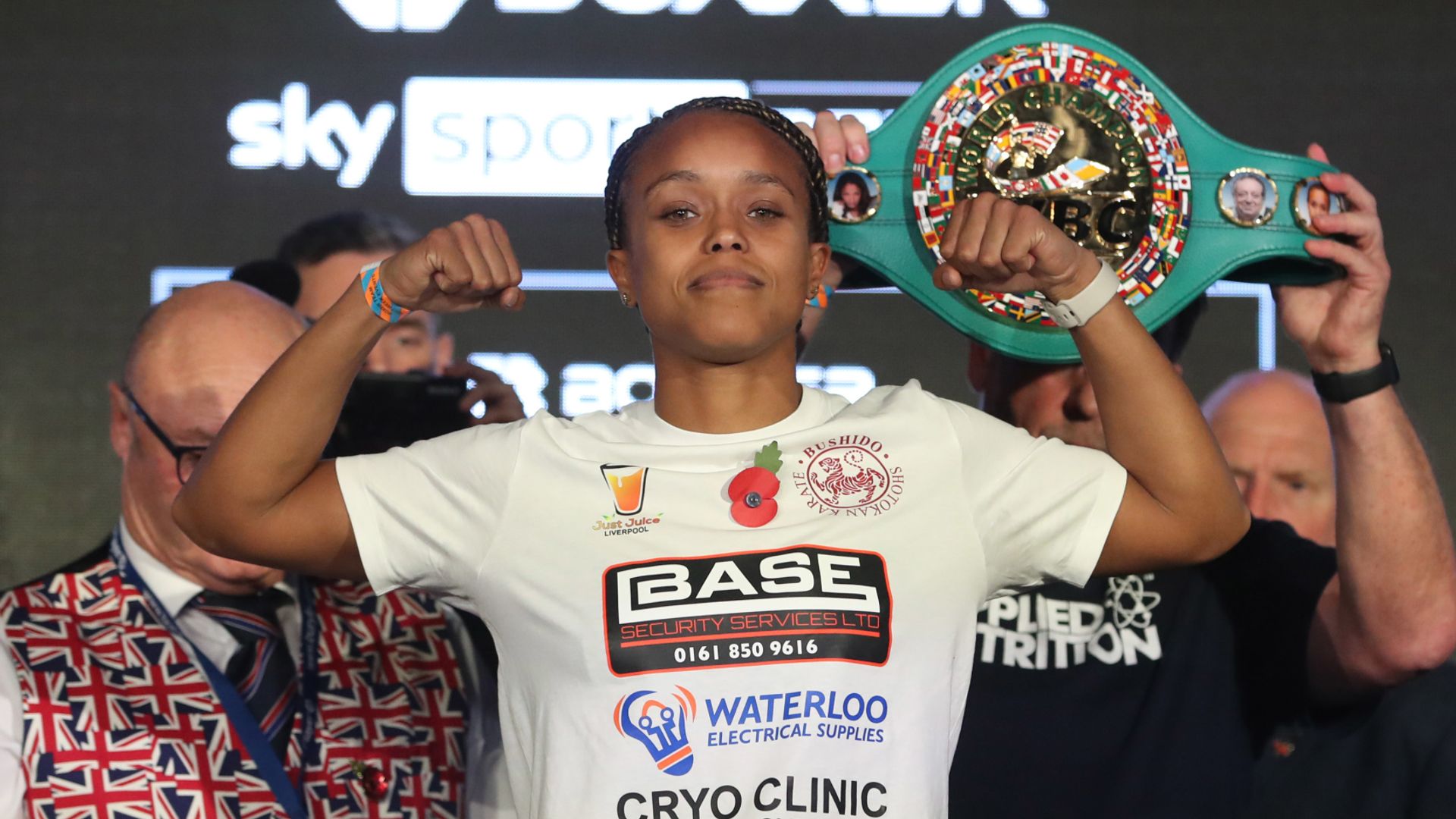 Natasha Jonas has the biggest fight of her career tonight when she headlines at the AO Arena in Manchester against Marie-Eve Dicaire in an IBF, WBO and WBC super-welterweight title unification.

We look at exactly what is on the line for the Liverpudlian, and other key questions ahead of tonight’s Manchester card, live on Sky…

What’s at stake for Jonas?

This is a major moment for Jonas in itself, as she tries to win her third consecutive world championship since February.

But given what it could lead to, the stakes are even higher. Beating Dicaire would not only make Jonas one of the most successful fighters of the year, it would set her up for even bigger contests in 2023. 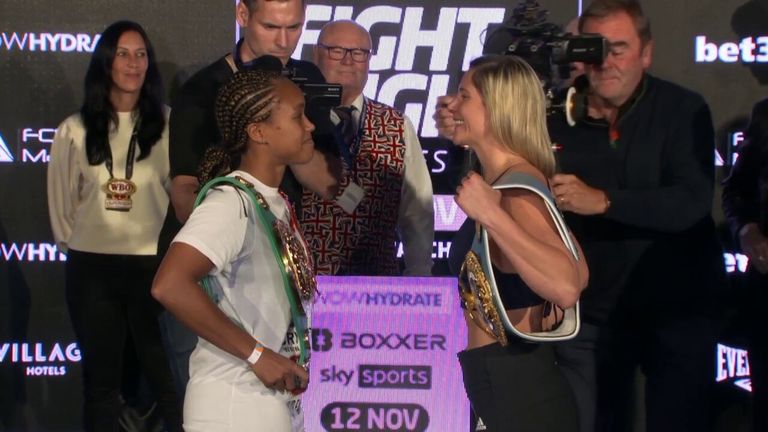 There were no ill-feelings between champions Natasha Jonas and Marie Eve Dicaire ahead of their super-welterweight unification fight on Saturday, live on Sky Sports

Jessica McCaskill lost to Chantelle Cameron at super-lightweight but still holds the undisputed welterweight title. That is the fight promoter Ben Shalom wants to make for Jonas early next year.

“That was a fight Natasha wanted from the start and I think it’s a good fight for McCaskill. I think it’s the obvious fight,” Shalom told Sky Sports.

“Come through [Dicaire] then McCaskill is the fight that’s No 1 on her list. She will feel comfortable at 147lbs, having been at 154lbs [and] Jessica McCaskill against Natasha Jonas is a huge fight for women’s boxing.

“She wants Katie Taylor, she wants the Claressa Shields fight. That’s the thing with Tasha now she’s become world champion, which really was her dream and what she needed, to be honest, after how much she’s given to the sport, she’s now in a position where all she wants is the big names and at whatever weight as well. She can box at anything from 140 to 154lbs.

“She wants the legacy defining fights for her career. She came very close against Katie Taylor, one of the closest anyone’s come to beating Katie Taylor. For us she beat Terri Harper as well, she got very unlucky in that fight. She’s got the bit between her teeth and she wants the biggest names.”

Dicaire though could prove to be dangerous. “Her only loss is to Claressa Shields. She’s going to be confident. She knows with Tasha this isn’t her natural weight but we’ve seen in her last two fights Tasha’s power carry through,” Shalom said. “[Jonas] feels like she’s faster than a lot of the girls in the division. But this is definitely her toughest test. [Dicaire] stopped [Cynthia] Lozano in her last fight, in the seventh round. She is durable, she is tough. As I say only one loss to Claressa, so it is a tough fight. But it’s what you would expect for a unification.

“Saturday’s going to be a very, very tough night. [Jonas] is going to have to be even better than she’s been against Patricia Berghult and Chris Namus as well.

“If she comes through it sets up another big year for her and who’d have thought that, at this stage of her career, she’s her most prolific, she’s her most successful and she’s looking better and better every time.”

Is Dalton Smith the future of British boxing?

The short answer is this fight against Kaisee Benjamin on the Jonas-Dicaire undercard will be another indication of just how far Sheffield’s Dalton Smith can go.

He’s scarcely put a foot wrong so far in his professional career. The 25-year-old has a 12-0 record, with 10 of those wins coming inside the distance. He won the British super-lightweight title in his last fight when he stopped Sam O’maison.

Benjamin however is a worthy challenger at British level and how Smith performs in this championship fight will be a good gauge for how quickly he can continue his progression.

If he carries on along his current trajectory Smith is expected ascend to world level, in a division that includes star names like Josh Taylor, Jack Catterall, Teofimo Lopez, potentially Ryan Garcia and others. Smith looks like he could be on course, eventually, to join that kind of company.

He is part of an exciting generation of young fighters from the UK that includes Tokyo Olympians like Ben Whittaker and Caroline Dubois and others who are set to carve out their own paths through the sport.

The future isn’t here quite yet, but Smith has the potential to be one of the stars of British boxing in years to come.

He knows himself though that he has to perform. Benjamin is the next fight up. Naturally winning is all-important, but on this occasion style matters too. 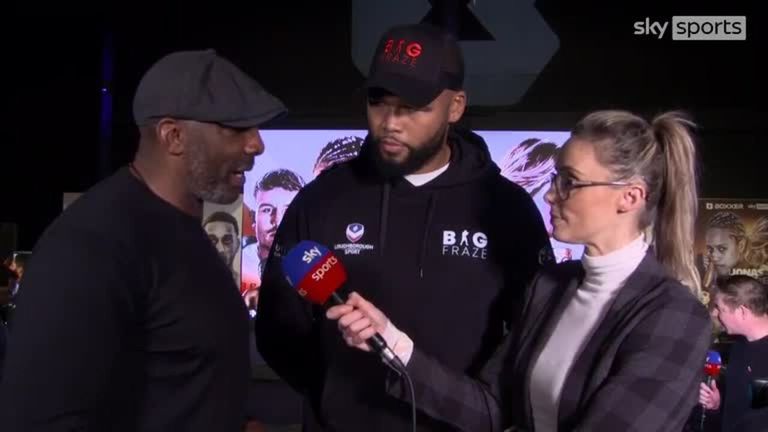 Will Frazer Clarke get a first professional test?

Given that Frazer Clarke is a veteran of three Olympic cycles, and the proud winner of a bronze medal at the Tokyo Games, there’s no need to doubt his ability. But his professional career so far has just been three rapid knockout wins, with his last opponent folding as rapidly as his first.

But Kamil Sokolowski on Saturday is bound to give him rounds, and will seek to make a mark against the heavyweight prospect.

“It’s really the start of his journey. Once you get past Kamil, there’s no looking back and it’s going to be step up after step up. He wants to be above British [level] by the end of next year, into European and that’s when it will get really exciting,” promoter Ben Shalom said.

“He’s not even done six rounds yet. All his fights have finished early. This is a fight that we hope will go the distance. We were honest with Kamil, we tried to give him eight weeks, we wanted him to be as prepared as possible and he’s caused upsets in the past. He’s performed well in the past.

What else to look out for on the big Manchester bill?

We’ll see if Bradley Rea is ready to move up in level. The local fighter is fighting for his first title when he challenges Tyler Denny for the English middleweight championship.

This bout is Rea’s first scheduled 10-rounder, whereas Denny is a proven veteran. He fought three times for the English title before he won it, rectifying a controversial draw with River Wilson-Bent by beating him in their rematch last time out.

If Rea does win this fight, he would surely deserve to challenge for the British title.

Viddal Riley has trained YouTuber KSI, been called out by social media personality Jake Paul and built up a following of his own. But he’s also a real boxer who was a gifted amateur. He can serve up a reminder of his actual skills against Ross McGuigan, an unbeaten prospect himself, in the first televised bout on the card.