Tavernier’s late penalty salvages point for Rangers | Gio: ‘I have no fear’ 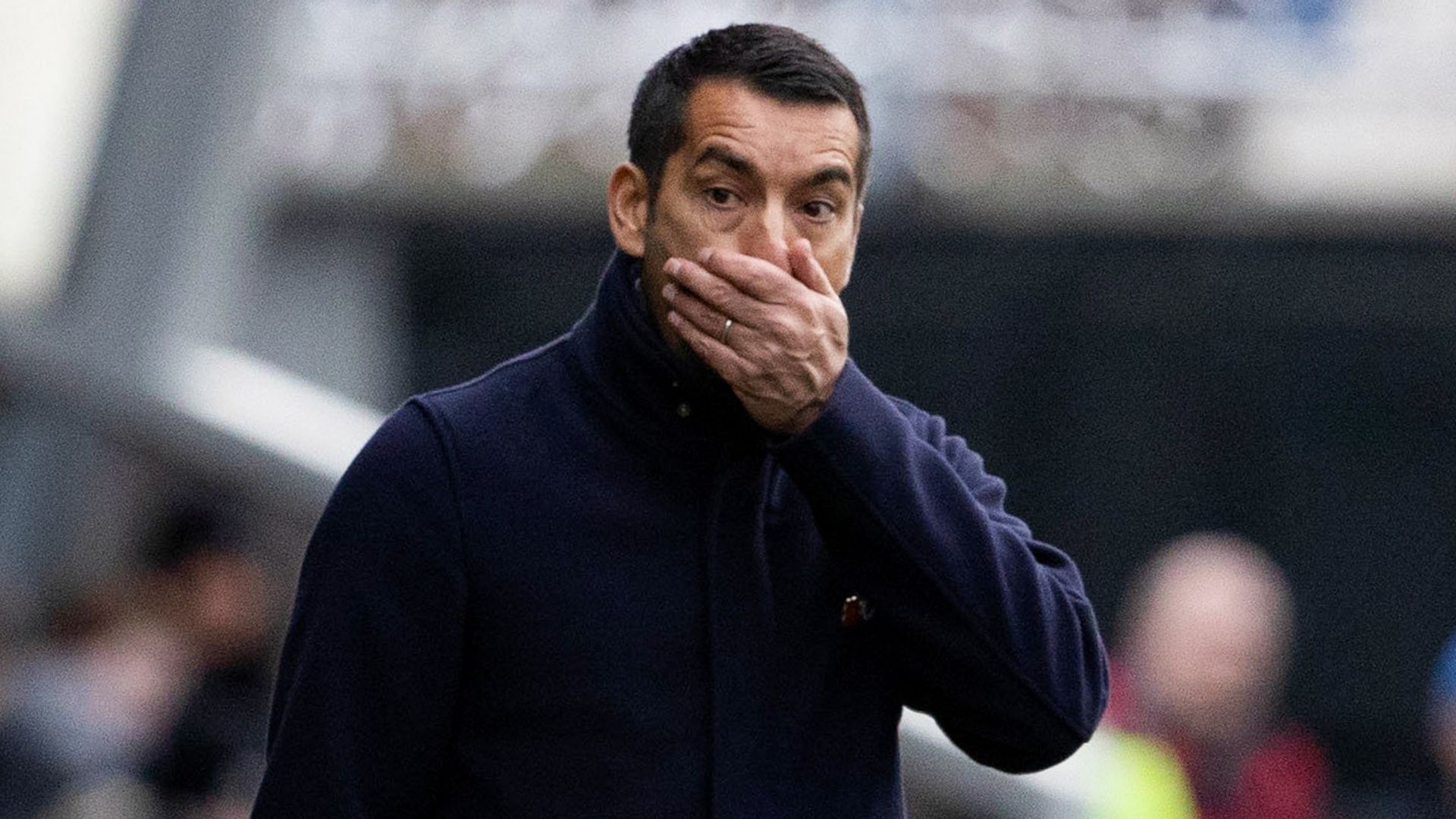 Giovanni van Bronckhorst is under increasing pressure after his Rangers team needed a late penalty to rescue a point against St Mirren.

Rangers enjoyed plenty of possession, but Jonah Ayunga slammed home the opener at the second time of asking as St Mirren looked to extend their home unbeaten league run to eight games.

Tavernier fired in the equaliser from the penalty spot after a VAR check ruled Ryan Kent was brought down by Ryan Strain just inside the box.

Buddies ‘keeper Trevor Carson pulled off a brilliant double save deep into injury time to deny Kent and Tavernier as Rangers pushed for a winner.

Rangers could now find themselves nine points behind Celtic in the Scottish Premiership title race at the World Cup break if they win against Ross County.

Is time up for Van Bronckhorst?

Top-flight football in Scotland takes a break for the World Cup and who knows what will happen in the Ibrox boardroom during that period but the Dutchman appears to be on borrowed time.

Van Bronckhorst had to contend with more injury problems for the lunchtime kick-off.

With top scorer Antonio Colak out with a muscle problem, Alfredo Morelos made his first league start this season.

Midfielder Glen Kamara replaced the injured Ben Davies with James Sands moving back to central defence, while Scott Wright was in for Rabbi Matondo. 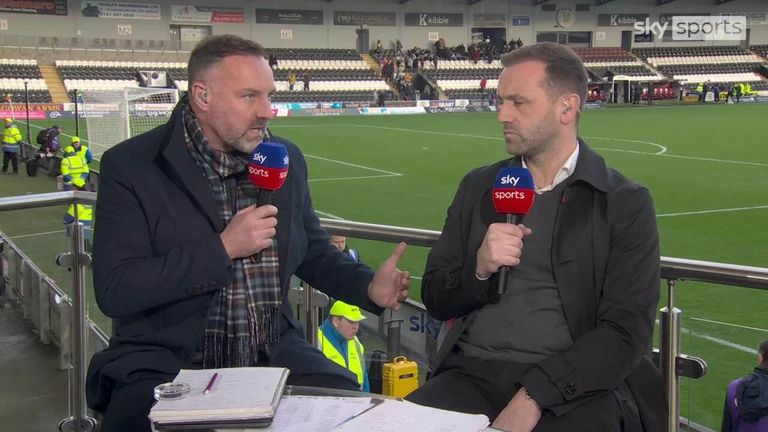 Kris Boys and James McFadden dissect more dropped points for Rangers as they are held to a 1-1 draw at St Mirren with Boyd declaring that the Scottish Premiership title race is now over.

For St Mirren, Ayunga replaced Alex Greive and he paired up with Curtis Main to give the Rangers centre-back pairing of Sands and 18-year-old King a physical test.

It was Rangers who created the first clear-cut chance in the seventh minute.

Midfielder Malik Tillman slipped the ball between the legs of Saints defender Marcus Fraser but with only ‘keeper Trevor Carson to beat, he dragged his shot wide of the target.

Then Carson blocked Wright’s close-range header at the back post from a Borna Barisic cross.

Wright drove wide after a swift counter-attack and as Saints responded, Greg Kiltie’s delivery across the face of the Light Blues’ box found no takers before Buddies defender Declan Gallagher headed a corner wide.

Scott Arfield replaced Kamara for the second half which began, somewhat bizarrely, with Morelos being immediately booked by referee Clancy for barging into Charles Dunne. 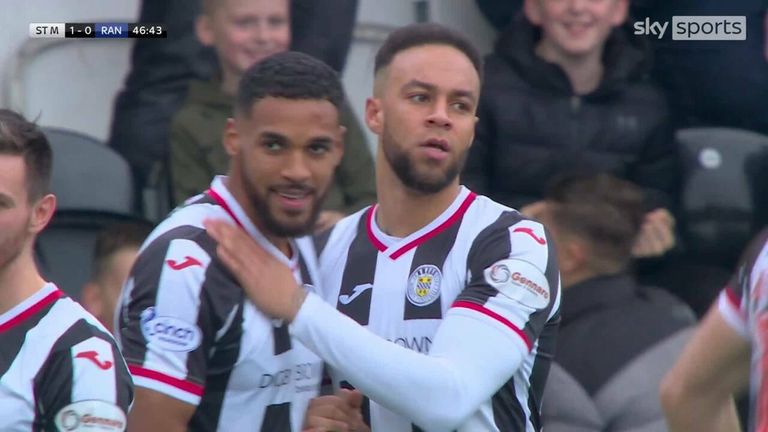 Stephen Robinson’s battling side then took the lead.

Following a long Gallagher throw-in and a flick-on by Main, ‘keeper Allan McGregor parried Ayunga’s first effort from close range but as King hesitated, the St Mirren attacker fired into the net.

Suddenly Rangers and their travelling fans were gripped by anxiety.

There was more trouble for Rangers when King, after a long period of treatment for concussion following a clash with Main, was taken from the field on a stretcher and replaced by Ryan Jack, with John Lundstram moving back to central defence.

St Mirren fought back but now the attacks were underpinned by desperation. 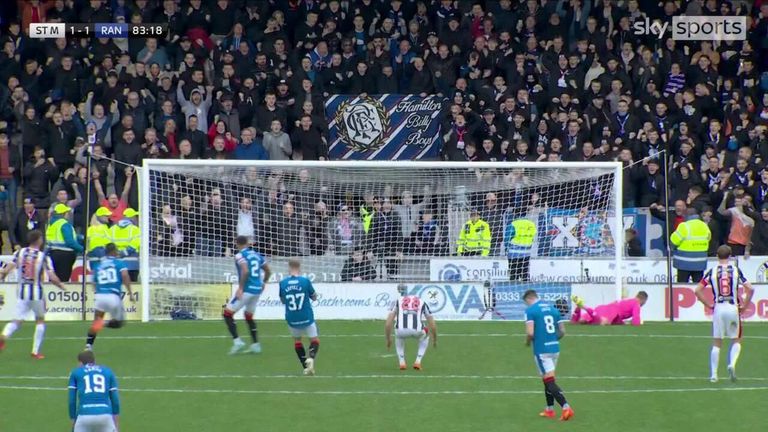 James Tavernier scores from the penalty spot to make it 1-1 for Rangers against St Mirren.

As play stretched, Ayunga came close with a long-range effort before Kent was booked by referee Clancy for diving inside the box after a challenge by Fraser.

However, after a VAR check, a penalty was awarded and the yellow rescinded with Tavernier slamming the ball past Carson to level.

There were nine minutes added on at the end during which Carson saved a drive from Kent and a header from Jack before again Rangers ran out of time, with their title hopes further damaged.

Van Bronckhorst: ‘I never have fear’ 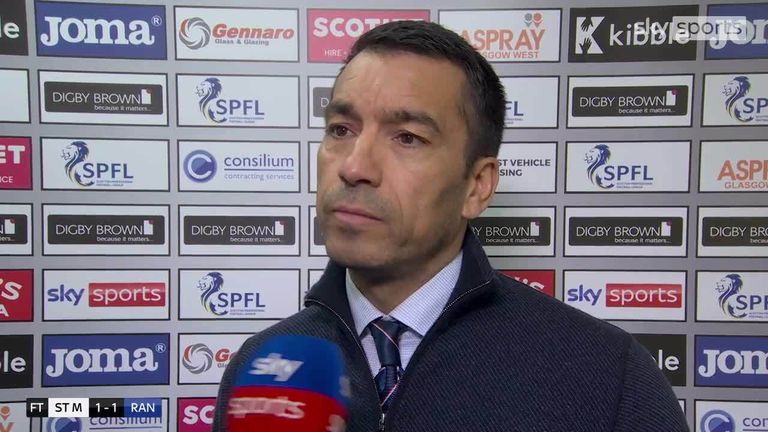 Rangers manager Giovanni van Bronckhorst says he has no fear over his future at the club despite pressure growing after being held to a 1-1 draw at St Mirren.

Rangers manager Giovanni van Bronckhorst told Sky Sports he will hold talks with the Ibrox board:

“If we keep dropping points, I’m uncomfortable and that’s what comes with the job.

“We prepare the players as best as we can then they have to put in the performance and that’s always the case.

“We’re going to sit down and speak about the last couple of months and which way we go forward.

“I have no fear, I never have fear. I just see what comes.” 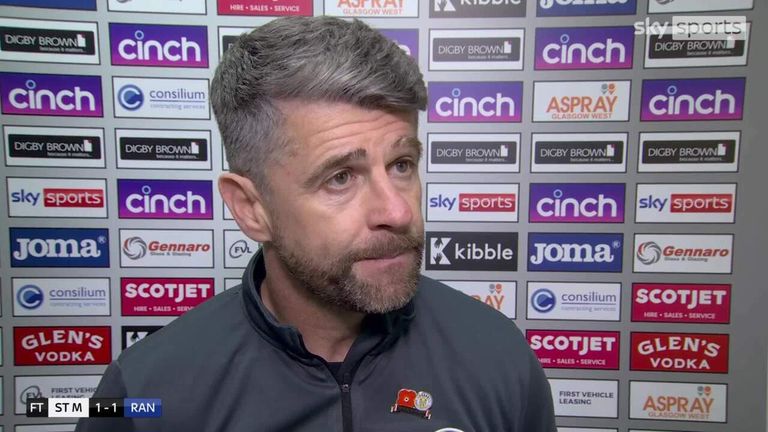 St Mirren manager Stephan Robinson says he was disappointed to draw 1-1 with Rangers and said he couldn’t see them scoring.

Stephen Robinson felt his St Mirren side should have taken the victory:

“Disappointed not to get the three points in the end, I think the boys deserved it.

“I thought we were excellent and I didn’t see them scoring. That’s eight penalties in 15 games now, so hopefully after the break we’ll get our run of luck and decisions go our way.

“So proud of the boys today. When you look at the resources we’ve got and we went toe to toe with them.”

The Scottish Premiership takes a break for the World Cup with Rangers returning to action at home to Hibs on December 15, live on Sky Sports. The game kicks off at 8pm.

St Mirren’s first game back will be away to Motherwell on December 17. Kick-off 3pm.