The NFL took the next step in its globe-trotting ventures this week as it landed in Germany ahead of Sunday’s historic Munich matchup between the Tampa Bay Buccaneers and Seattle Seahawks.

Having successfully established itself as a permanent fixture in the UK sporting landscape, the league now turns its attention to the largest NFL fan base in Europe by staging a debut regular season game in Germany.

Such was the vast interest that the league claimed it received three million ticket requests after an instant sell-out earlier this year.

A love for the sport stems heavily from Germany staging five preseason games between 1990 and 1994 as well as being represented by the Hamburg Sea Devils, Fire, Berlin Thunder, Cologne Centurions and Galaxy in the former World League of American Football/NFL Europe/NFL Europa at various stages between 1991 and 2007.

Former New England Patriots Super Bowl-winning offensive tackle Sebastian Vollmer, who was born in the German town of Kaarst, says Sunday’s game has been over a decade in the making. “In my wildest dreams maybe (I believed it would be possible), I remember being drafted by the Patriots in 2009 and I was talking to Mr Kraft, he came up to me and said ‘Germany is really interesting, I think we’re going to play there soon’,” Vollmer told Sky Sports.

“Obviously it took another 13 years or so but it just showed the vision he and other owners had for the continent and obviously this country, we played in London and saw how successful it is, but it feels like Germany is and was the next natural step in what will truly become a global sport. Every day it’s getting more and more exciting here.

“We’ve seen over the last six or seven years a 20 per cent growth, this is through TV and internet, most fans have not seen a game live in their country. Sporting events live in a stadium is a different feel.

“The NFL made it clear, this is not a one-and-done for us, we want to be part of the community and integrate ourselves in this lifestyle.”

It marks the first game of an agreement that will see Munich and Frankfurt host two each over the next four seasons after the pair were awarded rights ahead of Dusseldorf after the league whittled its search for a host partner down to three finalist cities. 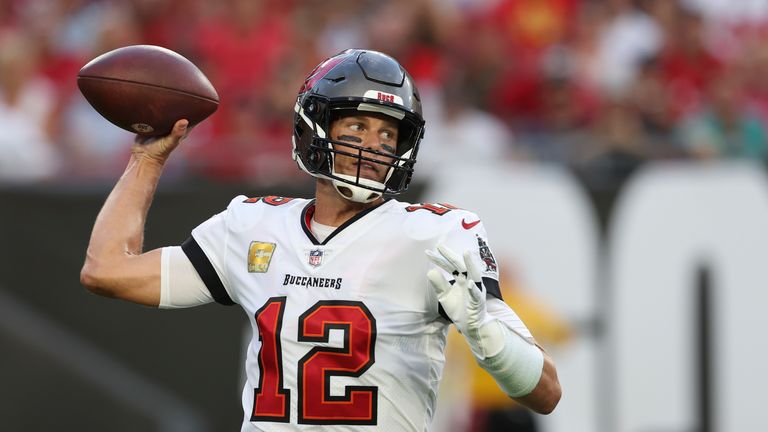 The Bucs were one of four teams to have been given marketing rights in Germany as part of the International Home Marketing Area initiative alongside the Carolina Panthers, New England Patriots and Kansas City Chiefs.

“It means a lot, I wish I could have played in my home country. It feels like a final, it’s just a next step but it’s been a long road of a lot of people,” Vollmer added.

“It’s the giving back part, a lot of Germans have supported the league from overseas, now they can actually see their stars.

“It’s exciting, emotional, yesterday I met a fan and I’m walking up to her and she started crying, absolutely emotional about football and it’s like ‘wow’.

“Without them (the fans) it wouldn’t be possible, right? It’s a huge step for the league, a huge business, a huge company, the biggest sports league in the world saying ‘we’re going to pack up and come over here’.

“It’s a big thank you to the fans that ‘without you it wouldn’t be possible’.”

NFL commissioner Roger Goodell admits setting up a base in Germany has been a long-term ambition of his, with more to come as far as the league’s international operation is concerned.

“We have a long history here, we played back in 1990 after the wall fell in Berlin with an American Bowl Series and then had the World League and NFL Europe,” Goodell told Sky Sports. “This is the first regular season game in Germany, I think that’s spectacular, this market deserves it.

“The league is in a perfect place for this, we have long-term media deals, we have stability, we really believe that international is a very significant opportunity for us.

“I think there is going to be a renewed effort, a renewed focus on this to make our game a truly global game.

“I’ll probably be thinking of that history, how far we came from 1990, that was sort of a pet project of mine.

“I wasn’t sure that ball was going to get kicked off, but now to see it kicked off in a regular season game I just think it demonstrates how far we’ve come and the potential of how far we want to go.” The teams arrive bearing contrasting narratives to that which were projected when the Seahawks and Bucs were first announced as the maiden Germany matchup.

Backup quarterback-turned-MVP contender Geno Smith leads a Seattle side thriving in the post-Russell Wilson era, while Tom Brady, his limping offense and the Bucs arrive looking to keep their season alive.

For Smith, Germany awaits as another welcome addition to a career year for the veteran.

“I’m extremely excited, I look forward to it,” he said. “It’s my first time playing in an international game, so it’s going to be fun. Our guys are out here having fun. We’re trying to see what Munich is all about.

“I think everyone on our team was excited, coach included. It’s definitely not a nuisance. Any time you get to represent your country internationally, it’s a big thing. I liken it to being on USA Olympic basketball or something like that.

“You go overseas and you’re playing your sport, but you’re also representing your country and bringing new fans to the sport as well. I know there’s a big following out here, and we look forward to putting on a show for those guys.

“The more we can bring fans along, the more we can go out there and be advocates for the U.S. and for our sport of American Football to maybe get more kids in Germany or people in Germany to watch and want to play, it’s very important.”