Neither goalkeeper was troubled unduly during a lacklustre first half, with Miguel Almiron volleying over at one end and Armando Broja forcing a routine save at the other as the opening 45 minutes ended predictably goalless.

The Magpies, sensing an opportunity to prey on a below-par Chelsea side, were much more progressive after the restart, although Nick Pope was forced into a sprawling save in the 65th minute to deny Conor Gallagher’s curling shot.

Newcastle, who went ahead two minutes later when Almiron embarked on a jinxing run before finding Willock, will enter the World Cup break as the top-flight’s third-placed team. Chelsea, however, are languishing in eighth.

Potter, conversely, is the first Chelsea manager to lose three league games on the trot since Jose Mourinho in November 2015 – who incidentally lost his job the following month.

Willock’s resplendent strike – his second goal in as many games – arrived at the perfect time for the hosts as momentum had begun to swing the way of Chelsea, albeit briefly.

Player of the match: Joe Willock

But in-form Almiron was able to wrestle control when he easily dodged a half-hearted challenge from Kalidou Koulibaly, before nudging the ball into the path of Willock whose first-time shot was rifled home in the 67th minute.

Eddie Howe’s side have now amassed 30 points this term, a total they did not reach until March last season, and sit two points shy of second-placed Man City.

Potter: We have to lick our wounds 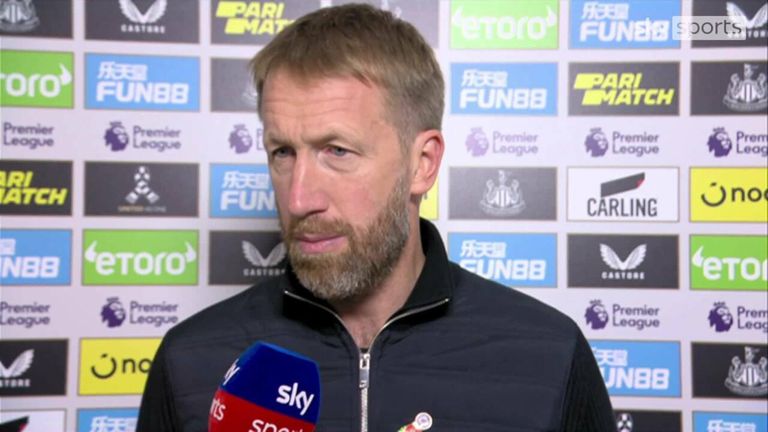 Chelsea manager Graham Potter says that his side are in a bad moment and need to regroup after the World Cup following their defeat to Newcastle.

“First half there were too many unforced errors. When we had the ball we lacked that last bit.

“Newcastle play with huge intensity, they’re in a confident moment. You can see the difference between the two teams in terms of the schedules.

Chelsea only had seven touches in the opposition box in this match, their fewest in a Premier League game since January against Manchester City (7).

“In terms of running power and intensity – that was a challenge for us. It was a relatively tight game, to be honest, but Newcastle put you under pressure.

“It was a tough match. We had to make changes because they were overrunning us a bit. We added an extra body in midfield. We had an effort with Conor [Gallagher].

“We tried, but in the end we lacked the quality to get the goal we needed. We need to do more. Eddie is doing brilliantly. It’s not nice for us, we have to lick our wounds. We’ll use the break to recharge.” Newcastle manager Eddie Howe says that there is still more to come from his side after a great victory against Chelsea.

“Very good performance. We pressed really well. Our energy and fitness levels were different class. We executed everything pinpoint. So very proud tonight.

“I felt a goal was there for us. There wasn’t a huge amount of goalmouth action. It was going to be a moment. That moment of magic came from Joe Willock.

“Nick [Pope] steps up in the big moments. He wasn’t overly worked. I don’t think we’re looking to set out markers, it’s just another step for us. We were more than a match for Chelsea.

“Newcastle will be in the Premier League’s top three at Christmas for the first time since 2001-02, when they were top of the tree on Christmas Day. Chelsea, however, have fallen below Brighton, having played a game more.

“Potter must be feeling the pressure. Indeed, it’s hard to decipher exactly what a Chelsea team looks like under the former Seagulls boss.

“Performances are disjointed, helped little by a series of injuries to key players, but the lack of Plan B is altogether stifling.

“When Joe Willock struck a sumptuous opener, with over 20 minutes remaining, you felt as if the outcome was almost inevitable. Will Newcastle end up replacing Chelsea in Champions League competition next season? It’s a distinct possibility.

“If the England vacancy did happen to open up after the winter World Cup in Qatar – with many suggesting that will be Gareth Southgate’s final hurrah at a major tournament – it will be Eddie Howe’s name touted as the most likely successor, not Potter’s.”

Chelsea host Bournemouth at Stamford Bridge on December 27 at 5.30pm after the World Cup break while Leicester host Newcastle on the same day at 3pm.