Jonas should be next if Taylor wants ‘biggest fight possible’ Next year could be even bigger for Natasha Jonas.

The Liverpudlian beat Marie-Eve Dicaire on Saturday night in Manchester to add the IBF super-welterweight championship to the WBO and WBC titles she’d already unified this year.

Jonas stunned Dicaire with her speed and punch power but the Canadian still put her size and strength to effective use as she turned their world title fight into a 10-round war, one that Jonas won by unanimous decision. 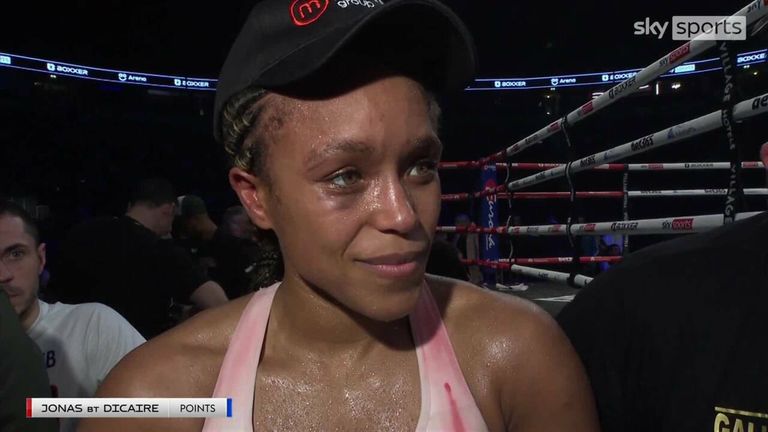 Natasha Jonas says she will go away and consider her options for her next fight after she won by unanimous decision to become IBF, WBC and WBO unified world champion

“I hit Marie-Eve Dicaire with some great shots and she shrugged them off and just came back. Sometimes with fighters, when they’re hurt is when they’re most aggressive and fierce themselves. I had to be smart,” Jonas told Sky Sports.

“I was adamant that she wasn’t going to bully me and throw me about the ring when we were close.

With the victory over Dicaire, Jonas has options. While she could defend her titles, she could also move back down through weights.

“She wants the Katie Taylor rematch. She wants Jessica McCaskill for all the [welterweight] belts. She wants Claressa Shields [at super-welter]. She feels she’s completed everything,” her promoter Ben Shalom told Sky Sports.

Jonas first boxed Katie Taylor in an epic Olympic quarter-final at London 2012. They eventually fought for Taylor’s undisputed lightweight title as pros. A rematch could be the first women’s boxing match to headline at a stadium.

“That is the fight that makes the most sense if we’re all thinking about where we could go. We saw what Shields-Marshall did. If we take a step back and say ‘how do we make something really special’, I think Jonas is the biggest name now I would say from England in women’s boxing and Katie Taylor is a huge star of the sport, between her and Claressa Shields for the biggest star,” Shalom said.

“It has to appeal to Katie,” Shalom continued. “We respect Katie Taylor massively. She will have seen Tasha Jonas’ ascendancy over the past year and I think if she wants a legacy fight, if she wants the biggest fight possible and she wants something to take home that fans can really buy into then I think Tasha Jonas is the fight.

“I think I would not be averse to Natasha Jonas going to fight Katie Taylor at Croke Park.”

Her trainer Gallagher said, “Katie Taylor, we’d love to see that rematch, there’s talk about Croke Park, let’s do it at Anfield. Natasha Jonas is the one that’s come closest to beating Katie Taylor, when you go look at the scorecards.

“That’s another fight to see, Jessica McCaskill or Claressa coming down.”

That underscores Jonas’ astonishing ascent, all in one year at the age of 38.

“I know I’m not going to be in this game forever. I’m on limited time,” Jonas said. “Whatever opportunity is the best for me I’ll take.