Raymond van Barneveld turned back the clock to secure his place in the knockout stages at the Grand Slam of Darts after edging reigning champion Gerwyn Price in a deciding-leg thriller in Wolverhampton on Sunday.

Van Barneveld – a Grand Slam winner in 2012 – defied a 106 average from the Welshman to prevail in an epic showdown at the Aldersley Leisure Village, recovering from 3-1 down to book his place in the last 16.

Price made a blistering start to the contest, but Van Barneveld came roaring back, registering legs of 11, 14 and 14 darts to force a decider, before sealing the deal with a nerveless 67 finish on double 16.

Barney: One of my best wins ever 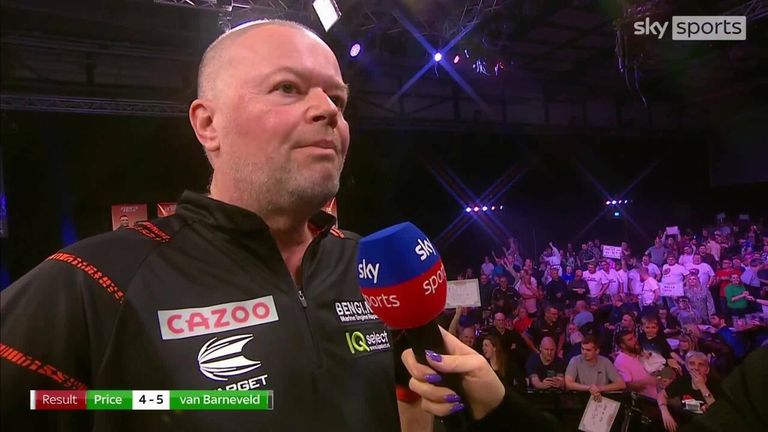 “This is one of the best wins of my career,” said Van Barneveld, who will take on world youth champion Ted Evetts in his final Group A tie on Monday evening. Three-time champion Price will now face Dave Chisnall in a winner-takes-all clash on Monday, after the 2014 runner-up opened his Group A account with a 5-2 win over Evetts, averaging 101 and landing four 180s in the process.

Dirk van Duijvenbode was the first player to secure a place in the last 16, reeling off four straight legs from 3-1 adrift to defeat Rob Cross, with a 10-darter in leg five sparking his comeback.

Cross now faces a straight shoot-out for Group D qualification against Martin Schindler, after the German won the final three legs of his clash against Adam Gawlas. 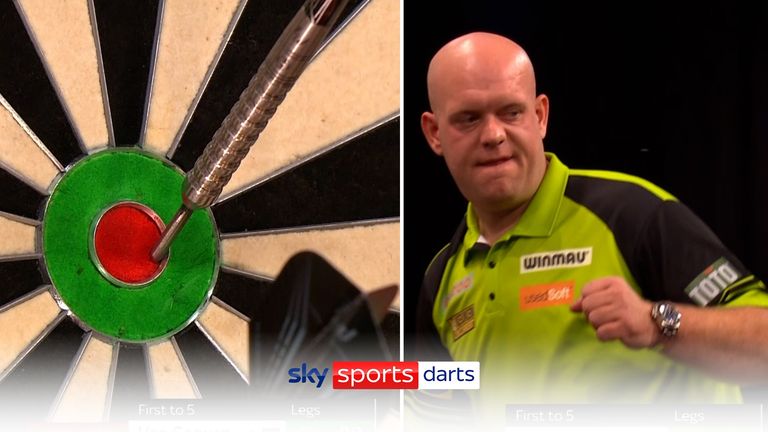 Wright will lock horns with Nathan Aspinall in their final Group E clash on Tuesday, after the World Grand Prix runner-up got his Group E campaign back on track with a 5-1 success against Fallon Sherrock.

Dutch star Michael van Gerwen has already sealed his spot in the knockout stages, breezing past Luke Woodhouse 5-1 with a 99 average and 50 per cent on the doubles to cap off a dominant display.

He will face European champion Ross Smith in a blockbuster Group G clash on Tuesday, after Smith recorded a 5-2 win over Nathan Rafferty to claim his first win on the Grand Slam stage.

Luke Humphries assured his place in the last 16, producing the performance of the tournament so far to dispatch Ryan Searle 5-1 with a sensational 107 average. 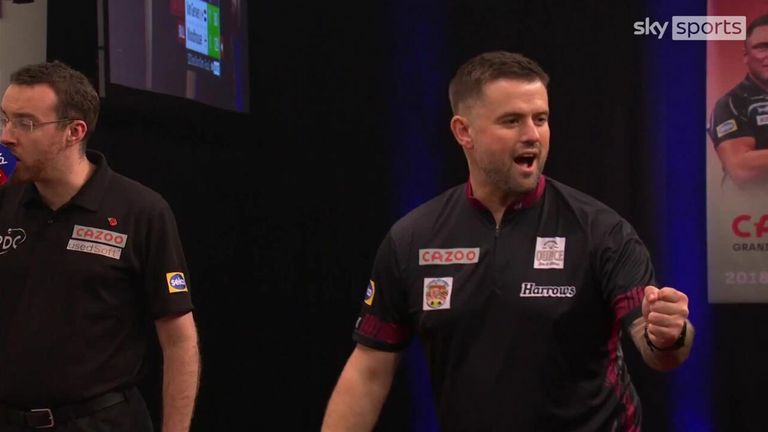 Sixth seed Humphries crashed in four 180s and converted five of his nine attempts at double to make it two wins from two in Group G, leaving Josh Rock, Searle and Scott Williams to scrap it out on Tuesday.

Rock secured his first Grand Slam victory with a deciding-leg win over Williams, hitting four 180s, taking out a 145 finish and firing in a 13-dart hold to claim a precious two points.

‘The Ferret’ Jonny Clayton is yet to drop a leg in this year’s Grand Slam, making it back-to-back whitewash wins in Wolverhampton after sweeping aside Jermaine Wattimena to guarantee top spot in Group F. 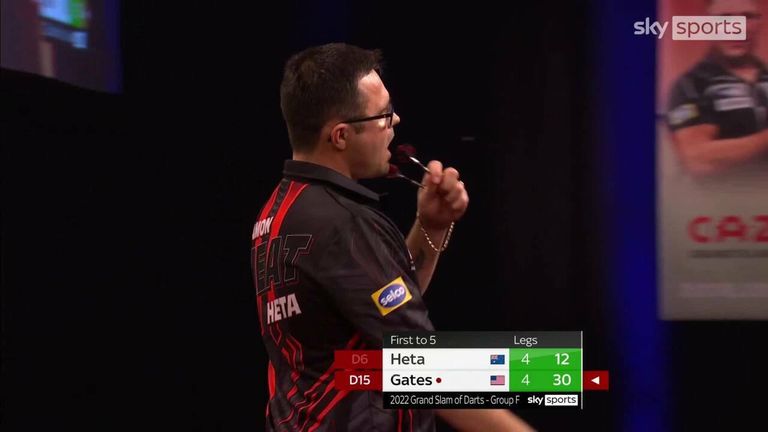 Clayton now plays World Cup winner Damon Heta in a stellar tie on Tuesday night, after the Australian fought back from 4-1 down to edge out Leonard Gates in a remarkable contest.

Elsewhere, Michael Smith established control of Group C with an emphatic 5-1 win over Joe Cullen, extending his winning run in the round-robin stage to 15 games.

Smith’s final Group C fixture will see him play Ritchie Edhouse, who preserved his qualification hopes with a convincing 5-2 win against Lisa Ashton to draw level with Cullen in the table. Danny Noppert turned on the style in his 5-2 win over Simon Whitlock to maintain his 100 per cent record in Group B, averaging 99 to move to the brink of a place in the knockout stages.

The UK Open champion now takes on 2018 semi-finalist Mensur Suljovic in his final round-robin tie, after the Austrian battled past PDC Asian champion Christian Perez to move level on points with Whitlock.

Groups A-D draw to a close on Monday evening, before players from Groups E-H continue their battle for qualification on Tuesday.

The top two players from each group will progress to the knockout stages, with the last-16 action beginning on Wednesday.

Watch the Grand Slam of Darts at Aldersley Leisure Village in Wolverhampton all the way through until the final on November 20 – with every session live on Sky Sports & don’t forget the World Championship is also coming to Sky Sports from December 14 until January 2.