Carbery and Henshaw out of Ireland’s autumn finale vs Australia 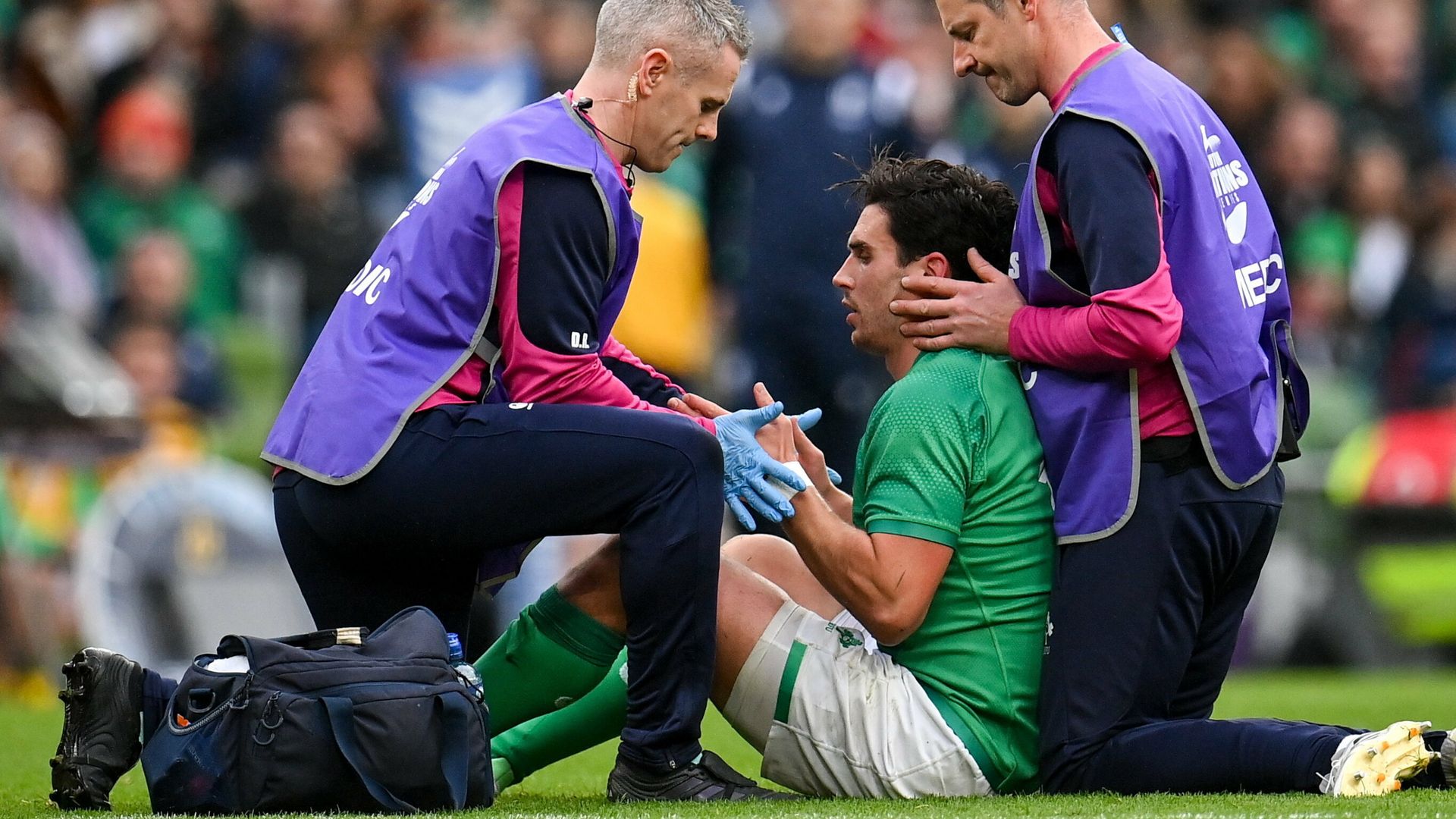 Fly-half Joey Carbery and centre Robbie Henshaw will return to their provincial sides for recovery after being ruled out of Ireland’s clash with Australia; Carbery failed a HIA in last weekend’s win over Fiji and Henshaw has a hamstring injury

Joey Carbery and Robbie Henshaw have been ruled out of Ireland’s Autumn Nations Series fixture against Australia on Saturday.

Fly-half Carbery will complete return to play protocols at Munster following his removal from the win against Fiji on Saturday for a head injury assessment (HIA).

Centre Henshaw’s hamstring issue means he will continue his rehabilitation at Leinster, while full-back Jimmy O’Brien will complete the HIA process on Monday and is expected to be available to train after that.

Leinster lock Joe McCarthy returns to the squad having completed his return to play protocol, while Connacht centre Bundee Aki – who has trained with the squad for the last few weeks – is available for selection again having completed an eight-match suspension and the coaching intervention programme.

Johnny Sexton, James Ryan, Andrew Porter, Josh van der Flier and Hugo Keenan, all of whom were injured in the win over South Africa, will be re-integrated as they return to fitness.

Ireland head Farrell described Saturday’s disjointed 35-17 success against Fiji as “awful” and “pretty underwhelming” after an injury crisis led to him making nine personnel changes to the starting XV which toppled the world champion Springboks.

The Irish remain top of the global rankings and have enjoyed a stellar year which is untarnished by the sloppy display against the Pacific Islanders.

Yet, with the next Rugby World Cup less than a year away, Farrell will be eager to ensure he has sufficient quality in reserve to cope should he be deprived of established stars at a more critical moment.

“When you’re missing so much, then people know they need to try to fill that vacuum, but they need the experience of being able to do that at the same time,” Farrell said. “At least we know where we’re at.

“I’m not worried, it is what it is. There’s a lot of big characters who weren’t in the changing room and I’m big on how certain people make people feel.

“We’ve different leadership going on this week in all sorts of areas and it’s something we need to get to the bottom of and keep progressing with. Sometimes you get a performance and it leads you into a false dawn, doesn’t it?

“It’s good, especially off the back of a win, to get into the bones of it, to dig down deep and see what the reality is.”

While Farrell and his coaching team will be keen to find answers, they must also quickly turn attention to an autumn finale against Australia.

The Wallabies are expected to revert to their strongest team at the Aviva Stadium after a much-changed line-up was stunned 28-27 by Italy, a week on from an agonising 30-29 loss to Six Nations champions France.

Farrell is confident the visit of the two-time world champions will focus the minds of his squad following the frustrations of the weekend.

“You look at their side [against Italy] and they made plenty of changes, probably because they are looking at us this week,” Farrell said of Australia.

“I know that it’ll be a tough enough week at the start of the week, but it will certainly focus the mind and we know what’s coming.

“Looking at their performance with a similar side that is probably going to be put out against us in Paris last week was probably more like it.

“They were very strong, especially set-piece wise, they went after the French and nearly got the big ‘W’ over there. That’s the type of game we’re expecting.”