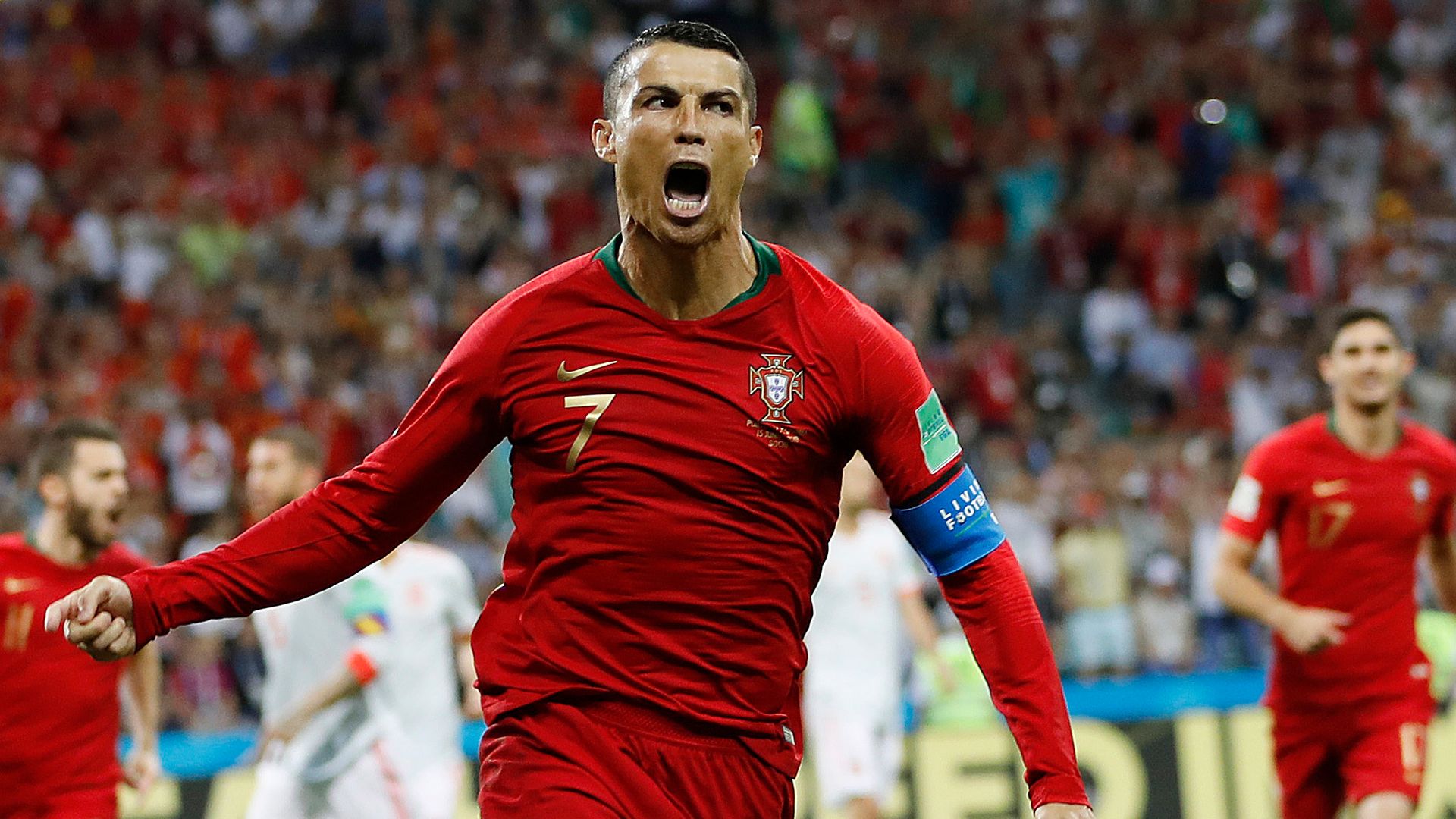 The 2018 World Cup thrilled and excited in equal measure. From Cristiano Ronaldo’s hat-trick to Germany’s early exit, we look back at the memorable moments.

France won the World Cup for the second time after beating Croatia 4-2 in a pulsating final in Moscow that included a controversial use of VAR.

Russia 2018 will be remembered as a tournament where football dazzled. Giants of the game suffered early exits, goals flew in late at an astonishing rate and England almost convinced football to come home.

Ahead of Qatar 2022, we take a look at the top 10 moments from a legendary five weeks four years ago…

It was supposed to be all about pre-tournament favourites Spain – but the headlines were grabbed by a familiar name.

The five-time Ballon d’Or winner came to the party in a big way, hitting a hat-trick, dragging Portugal to a memorable 3-3 draw in Sochi and reclaiming the centre stage for himself. Those that declared this game the greatest ever in a World Cup would not be too far from the mark.

Spain were seemingly heading towards victory after coming from behind twice to lead 3-2 with just minutes remaining, but Ronaldo, who became the first player to score in eight consecutive major tournaments, denied them right at the death with a late free-kick that got the world off their seats. The tournament did not look back from that moment.

After Ronaldo’s heroics on the Friday, attention turned to Lionel Messi on the Saturday.

That pressure seemed to take its toll on the Argentina maverick as he had to endure the ignominy of seeing his penalty saved as his side were held by World Cup newcomers Iceland in their World Cup opener.

When Messi stepped up, it seemed Hannes Halldorsson knew this was his moment. He grew in goal. The goalkeeper guessed correctly and dived full length to his right to keep out the penalty – the fourth time Messi had missed a spot-kick in his last seven efforts for club and country.

While Sergio Aguero scored a fine early goal, Argentina did not have the runners ahead of Messi, who had the look of a man trying too hard. Iceland got amongst him and Argentina had no answers. It set the tone for their underwhelming tournament that ended against France in the last 16.

Knowing anything but victory against Sweden would make it difficult for Germany to qualify from Group F, their time looked up with 95 minutes on the clock and the game locked at 1-1. But one more chance would fall. It fell to the class act on the pitch.

From a free-kick on the edge of the box down the left, Toni Kroos rolled the ball short to Marco Reus to change the angle. He then caressed a quite jaw-dropping strike through a crowd of Swedish players. The ball floated into the top corner and the Germans were saved.

The only way was up for the World Cup holders, surely?

The dramatic victory over Sweden had many people fearing that Germany might become unstoppable on their route to the final in Russia. However, in one of the greatest upsets in World Cup history, South Korea ended their tournament before the knockout stages.

With the game locked at 0-0 and Germany needing a win to qualify, Young-Gwon Kim bundled home from a corner and although the goal was initially ruled out for offside, a VAR review showed the ball coming off the foot of Kroos and the decision was reversed. Five minutes later, goalkeeper Manuel Neuer comically sauntered upfield and was dispossessed before Heung-Min Son fired into an open net.

The unflappable Germans had become a laughing stock. They were heading home.

Belgium’s 1-0 win over England was a meaningless final group game that will have been forgotten about instantly at the full-time whistle. But you will struggle to forget Michy Batshuayi’s brilliantly yet unfortunate choreographed celebration.

Adnan Januzaj scored the only goal of the Kaliningrad contest in the 51st minute but, despite his delightful finish, it was Batshuayi who dominated the post-match agenda.

The striker scooped up the ball after Januzaj’s goal and gave it a jubilant boot, possibly aiming for the back of the net. But unfortunately he missed the target from point-blank range and the ball ricocheted back off the post, before smacking into his face.

Cue an absolute slaughtering on social media, but one that the striker took well. Batshuayi immediately tweeted after full-time, as he said: “Ahahha I knew I would be ****** the minute I come to my mentions. Why am I so stupid bro **** hurts.”

It was a last-16 encounter that looked one-sided, but ended up producing one of the most exciting comebacks in World Cup history.

After an ineffective first half when Belgium’s golden generation lacked sparkle in the final third and found their best players restricted by Japan’s intensity, Roberto Martinez’s team were soon 2-0 down after a swift combo of ruthless attacks by the Japanese. It seemed yet another World Cup upset was on the cards.

Martinez turned to his bench and called for Marouane Fellaini. It was a game changer. As Japanese players began to tire, Belgium went direct and drew the game level. Surely time for Japan to shut up shop? Nope. They went for the win.

There were eight Japan players in Belgium’s final third as Thibaut Courtois launched the 94th-minute counter-attack by rolling the ball out to Kevin De Bruyne. The Manchester City midfielder led the charge before Thomas Meunier’s cross was beautifully dummied by Romelu Lukaku and Nacer Chadli slotted in the winner.

England won on penalties at a World Cup for the first time by coming through a dramatic shoot-out against Colombia in the last-16. It had a nation waking up the morning after, asking the question: “Did that really happen?”

David Ospina saved Jordan Henderson’s penalty to put Colombia on the brink but Mateus Uribe blasted his effort against the underside of the bar before Kieran Trippier restored parity. A big left hand from Jordan Pickford then kept out Carlos Bacca’s fierce effort – leaving Eric Dier to slot home. A nation went potty. Football looked to be coming home.

Every memorable World Cup needs a host nation to deliver on and off the pitch – Russia took care of that in 2018.

After winning two of their Group A encounters, a date with Spain awaited them in Moscow. Few gave them a sniff. However, a defensively-minded Russian side stifled the Spanish, whose prolonged possession was slow-paced and short on risk. Fernando Hierro’s men eventually paid the price on penalty kicks.

Igor Akinfeev saved spot-kicks from Koke and Iago Aspas during a nerve-jangling finale as the delirious hosts ousted the 2010 champions and booked a last-eight showdown with Croatia, where eventually their tournament ended in another dramatic shootout.

Kane’s ‘what if’ moment

England were 22 minutes away from reaching their first World Cup final since 1996 until Croatia dashed those dreams.

Ivan Perisic’s 68th-minute equaliser forced extra-time in a tense semi-final that ended 1-1 after 90 minutes. England took the lead through Trippier’s wonderful fifth-minute free-kick and looked in control of proceedings but squandered big chances to finish Croatia off in the first half.

On 30 minutes, Harry Kane was presented with the key chance when one-on-one with goalkeeper Danijel Subasic. His effort was parried out but the ball fell back to the feet of Kane a few yards out, with just Domagoj Vida on the line to beat. However, Kane could only smash the ball against the post and replays showed Subasic got the most decisive of decisive touches.

A fantastic World Cup was capped off by a fantastic final, which was packed with both brilliant and controversial moments.

Croatia will have plenty of complaints about the penalty awarded against Ivan Perisic, with debate raging about whether that was the correct decision or not, despite the intervention of VAR.

But there was also brilliance from both teams, with Kylian Mbappe underlining his status as the world’s most exciting young player in the world.

A pitch invasion hinted at political problems but as a sporting spectacle, the 2018 World Cup was one to remember.