Cunningham: Professionalism the future for women’s RL | ‘We have left legacy’ Jodie Cunningham believes English women’s rugby league needs to create a pathway towards a professional set-up like the NRLW; Australia will now take on New Zealand in the Women’s Rugby League World Cup final at Old Trafford on Saturday, with kick-off at 1.15pm

England stalwart Jodie Cunningham was one of many heartbroken players as the hosts fell to New Zealand in the Rugby League World Cup semi-final on Monday night.

The emotion was raw among the England side as their dreams of finally reaching a World Cup final were ended in a bruising 20-6 defeat by an all-too-familiar foe, the Kiwi Ferns’ strength and power just too much for England.

The Ferns and the Jillaroos benefit from playing in professional set-ups year-round and Cunningham believes, that if England are going to go a step further and beat one of those sides, professionalism in women’s rugby league is the answer.

“We have clearly narrowed the gap and I genuinely believe that on another day we would have beaten New Zealand,” Cunningham said.

“We’ve done so much hard work without being professional and I still think we had the ability to do it without that.

“But you can’t avoid the difference it would make if we were semi-professional or professional players, because we’d have the time and resource and the ability to invest, and the attractiveness for young girls coming through.

“That has to be where the sport gets to, and hopefully people will have seen the journey we have been on without being professional and can imagine how good we’d be with it.”

Despite the intense disappointment in the camp, which was elevated further by the news of head coach Craig Richards’ immediate departure, Cunningham is proud of the legacy her side left in front of a 7,000 crowd and hopes they have laid the platform from which women’s rugby league will only grow. 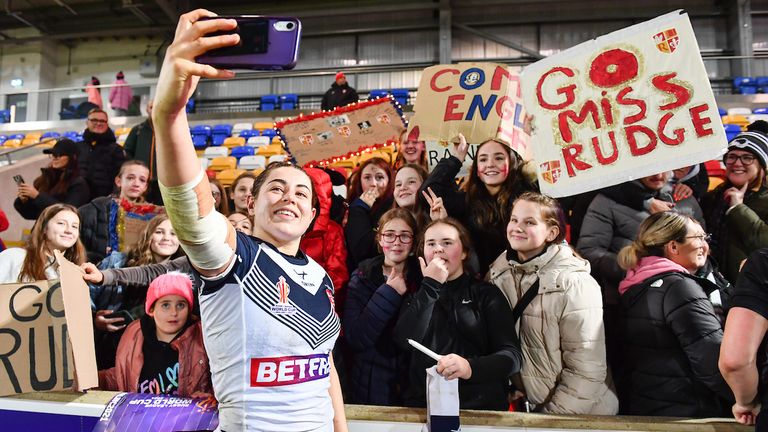 “I’m sure there’s young girls in the crowd who have been inspired who will go on and play and beat the Aussies and the Kiwis.”

“I’m sure there’s young girls in the crowd who have been inspired who will go on and play and beat the Aussies and the Kiwis,” she added.

“This squad has the ability to do that in a few years’ time as well.

“We clearly have narrowed the gap. it shows the progress we’ve made and the hard work that’s gone on behind the scenes.”

Richards: There is nothing more they could have done

Departing coach Richards also believes the English game has to catch up with the southern hemisphere and emotionally laid bare all the work he and his side have put in over the past five years.

“I don’t see what more they could have done other than sack off work and train unemployed,” said Richards.

“I’ve got girls going to gyms at five in the morning before work.

“I have spent five years trying to close the gap. It is not good enough.

“What more do you want from these girls? Those girls [New Zealand] are professional, so the question is do you want to compete with them or not?

“I hope that’s the way it goes. On the back of payment it is then about behaviours.

“So the players that get that need to recognise what being professional is and embrace it.”