Queiroz: Iran players free to protest at WC but within rules of tournament Iran’s players are free to join in the protests sweeping their country over women’s rights while they are playing at the World Cup but must do so within the rules of the tournament, says head coach Carlos Queiroz.

The rights activist HRANA news agency said 344 people have been killed and 15,280 arrested over the last two months of nationwide protests triggered by the death of 22-year-old Kurdish woman Mahsa Amini in the custody of the ‘morality police’.

Iran said her death was due to pre-existing conditions and accused its enemies of fomenting the unrest to destabilise the country. The demonstrations have turned into a legitimacy crisis for the clerical establishment, in power for over four decades.

Iran’s players covered up their national team badge when they played two warm-up internationals in September, which was interpreted as a sign of support for the protests, but they have been heavily criticised on Twitter in the last few days for meeting with Iranian leaders before their departure for Doha, where they trained for the first time on Tuesday.

However, Queiroz says they are free to protest at the World Cup as long as it conforms with tournament regulations and the “spirit of the game”.

“Iran is exactly like your country. It follows the spirit of the game and the laws of FIFA. That’s how you express yourself in football. Everybody has the right to express themselves,” Queiroz told a British journalist at a pre-tournament press conference.

“You guys bend your knees in the games. Some people agree, some people don’t agree with that, and Iran is exactly the same.

“It is out of the question to think that the national team is suffering any sort of issues like that, the players only have one thing in their mind which is to fight for their dream to be in the second round.” 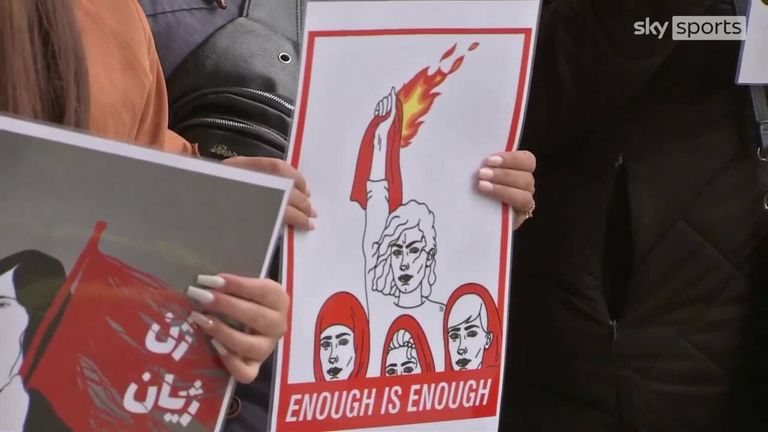 Queiroz, though, bristled and left the press conference after he was asked if he was ok with representing a nation that oppresses the rights of women.

“How much you pay me to answer that question? How much you pay me?” he said. “Talk to your boss and at the end of the World Cup I can give you the answer if you make me a good offer. Don’t put in my mouth words that I don’t say. I’m asking how much money to answer.”

As he departed, Queiroz, referencing the United Kingdom’s issues, said: “Think about what happened in your country with immigration”.

“On the point of reminding the reporter to focus on and think about what’s happening in his own country, Gareth Southgate has referenced that before, making sure your own house is in order before you take the moral high ground.

“But I think we need to understand the scale of what’s happening in Iran. On Monday, Iran’s parliament voted to bring in the death penalty for those protesting for women’s rights. There’s been around 326 deaths already in the country during these two months of protests. At least 25 have been women, 43 children, there’s dramatic scenes there.

“While as managers and players, the World Cup is the pinnacle of your career, you want to focus on that, you can’t just ignore what’s happening in the country you are representing. Queiroz did say once a ball is kicked in Qatar everyone will be focusing on the football and forgot everything else. I don’t think that’s true, not for the people who are fighting for women’s rights in Iran, here in Qatar and wherever else this is happening.”