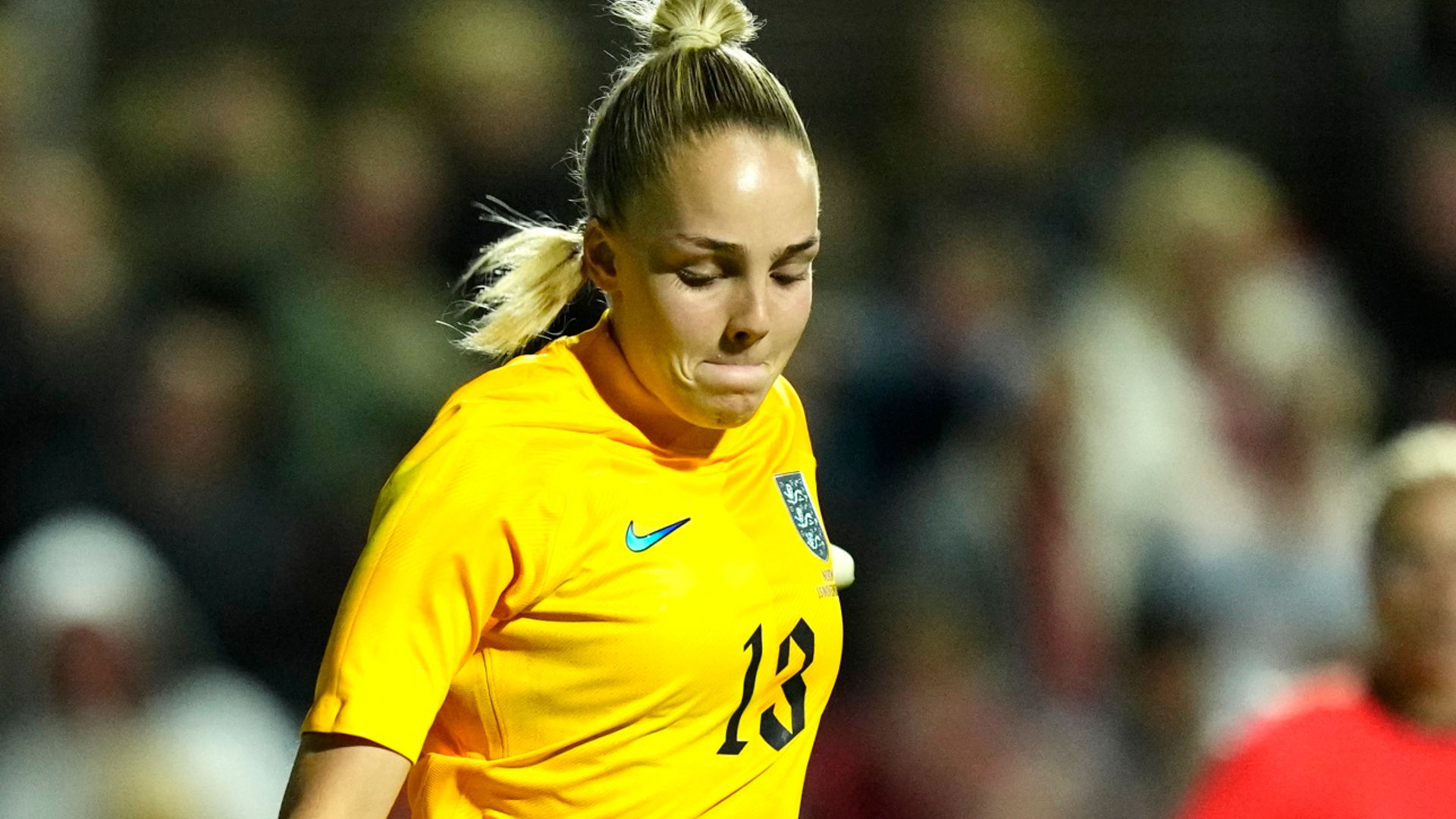 A late error from Ellie Roebuck saw 10-player Norway hold England to a 1-1 draw in Spain, although the Lionesses still ended 2022 with an unbeaten record.

Although billed as a friendly, there were a number of interesting storylines surrounding the game. England beat Norway 8-0 in the group stages of Euro 2022, with former England interim manager and Team GB head coach Hege Riise now in charge of the Lionesses’ opponents.

Norway pressed early on too as a much-changed England struggled to find their feet, but a sweeping Chloe Kelly cross was nodded home by Daly – who played much of the game in attack – to see the Lionesses ahead in the 33rd minute.

The goal seemed to inject some confidence into Sarina Wiegman’s side and they were handed a further advantage when Norway defender Anja Sonstevold was sent off for two quick fouls on Nikita Parris.

But a lapse in concentration from Roebuck saw Frida Maanum equalise. The Arsenal forward charged towards the area as the goalkeeper raced to meet her from the other direction. Roebuck then mis-cued her kick, taking her eye off it for a moment and allowing Maanum to roll the ball into the open net.

England desperately searched for a winner, but were unable to find the target as Riise celebrated with high fives and smile with her staff at full-time. But the Lionesses remain unbeaten under Wiegman, capping off a historic 2022.

How England were held by Norway

Norway had the better of the chances in the opening half an hour. Inside three minutes, Sophie Haug was played through wonderfully by Chelsea’s Guro Reiten, but England debutant Maya Le Tissier’s challenge put her off balance, with her shot palmed away well by Roebuck. Reiten then had a shot herself, but her awkward effort went wide.

England’s first opening in the 15th minute came courtesy of a Norwegian error. There was a mix-up between goalkeeper Aurora Mikalsen and Ingrid Engen, but the ball ricocheted off Daly from close range and went wide. Just before the half-hour, some lovely skill from Lauren James saw her take on the shot, but it went straight at Mikalsen.

After Daly fired England ahead, the Lionesses began to create far more openings, appearing to need the goal to boost their confidence and settle some nerves among a young side.

Kelly and Le Tissier both worked Mikalsen early in the second half, while the Man City winger saw a shot flash across the face of goal. But just before the hour, Roebuck was called into action, making a superb, leaping save to keep out Reiten’s free-kick.

England best passage of play in the 64th minute saw Niamh Charles round Thea Bjelde down the left before finding Ella Toone on the edge of the area. However, the latter’s shot was fired just wide. Parris then sent her header straight at Mikalsen.

Her effort was sandwiched in between two fouls from Sonstevold. On both occasions, the Man Utd winger beat the defender before being tripped with just six minutes between the first and second bookings.

But eight minutes later and a player down, Norway equalised after Roebuck’s error, setting up a frenetic finish at the Pinatar Arena. England threw everything forward, but were unable to add another against a well-drilled Norway defence.

“The last time these two sides met in Euros competition, England ran out 8-0 winners to secure qualification from their group and serve notice of their tournament-winning credentials – but Norway offered much more defiance this time around, a mere four months on.

“Someone who only featured for 20 minutes on that historic day in July was Chloe Kelly. She was reduced to somewhat of a bit-part role during the summer, but will of course be fondly remembered for the decisive touch that downed Germany and fired England to ultimate glory.

“Now, though, her role should be much more than super sub. She’s far better than a cameo, albeit she must fend off competition from the talented Lauren Hemp in order to hold down a regular starting berth.

“She has played a starring role across the Lionesses’ latest two international tests and was Sarina Wiegman’s most dangerous threat. It was difficult to keep count of the amount of crosses she furnished against Norway – the pick of the bunch leading to the opening goal as Rachel Daly nodded home.

“In truth, Kelly was ever so slightly let down by her forward-minded team-mates. She was creating from both flanks and the deliveries were sumptuous too – right in the corridor of indecision between goalkeeper and defender. Unfortunately, only Daly seemed to be on her wavelength.

“Keep this level of consistency up and it will be impossible to overlook her at next year’s World Cup. No doubt she’ll be on the plane, but she can trouble from the first whistle, not the 70th.”

When asked if England did enough to win the game: “Well no, otherwise we would have won the game. We tried enough. We did a lot to score the second goal, that is what we tried against Czech [Republic] last month. We had players there but we just didn’t get it in the back of the net.”

On Roebuck’s error: “It’s disappointing. That happens sometimes, that’s a team thing. We tried to score another goal but it didn’t work.

“Overall there’s so many things we can take from this game. Getting information, this is all to prepare for the World Cup and it gives us so much information. We saw so many players today and on Friday and that’s a good thing.

“It has been very nice. Although I am a little disappointed with this tie. If you would say that this would all happen from last September until now I wouldn’t believe you.

“This week three players made their debuts, lots of players have made minutes now. We take a lot from this and the overall year.

“I think I will toast a little bit at Christmas time and think it over.”

“I’m delighted to be on the score sheet. As a forward coming into tonight’s game, that was my target to score. Ultimately we didn’t win which is disappointing, but we’re ending the year with a 20-game unbeaten run.

“I love the No 9 position but I love football, I say it to everyone, I am happy to play everywhere.

“It is special wearing the No 9 shirt, it was the number my dad wore when he played so even more special.

“But I’m prepared for both positions always, I can’t just focus on one. It’s nice to have that role.”

Who were the winners and losers from England’s friendlies?

With Wiegman using the November friendlies against Japan and Norway to learn more about who could make her World Cup squad, Sky Sports News’ Anton Toloui gives an insight on who may have staked a claim – and who could be left at home…

Winner – Rachel Daly: “Two goals from two different positions for the Aston Villa player, who showed her versatility and goalscoring ability. Her place in the World Cup squad isn’t under threat but her worth grows every international break. Don’t expect her to usurp Alessia Russo as the starting No9, but being picked ahead of Ebony Salmon means it may not be the last time we see Daly as an England forward.”

Winner – Niamh Charles: “Charles is only one of two players to play every minute of England’s two games out in Spain. She’s gone from a Euros reserve to probably England’s first choice back-up at left and right-back. Not bad for someone with only two substitute appearances before this camp.”

Winner – Esme Morgan: “The Manchester City defender was picked to replace Leah Williamson at centre-back against Japan and filled in for Millie Bright in the second half against Norway. Lotte Wubben-Moy’s injury came at a bad time as Morgan now looks to be the third choice centre-back in the England depth chart.”

Loser – Ellie Roebuck: “It’s going to take a lot for Mary Earps to lose her place as England’s starting ‘keeper and Tuesday’s game against Norway didn’t help Ellie Roebuck’s cause. The Man City goalkeeper’s mistake led to the Norway equaliser and with fine margins defining games in big tournaments, expect Earps to keep the No1 jersey.”

Loser – Nikita Parris: “The Manchester United winger has been desperate for a chance to prove she deserves to be in England’s front three, but it just didn’t work out as she had hoped in Spain. Parris tried hard to break a stubborn Norway defence but a lack of goals and assists will not have helped her case. England are stacked with attacking options but don’t expect the current trio of Lauren Hemp, Beth Mead and Russo to be broken up any time soon.”

What’s next for England Women?

England’s first fixtures in 2023 will come in the Arnold Clark Cup in February as they look to defend their title.

The Lionesses face South Korea on Thursday, February 16 at Stadium MK in their opening game, also facing Belgium and Italy in the round-robin tournament.