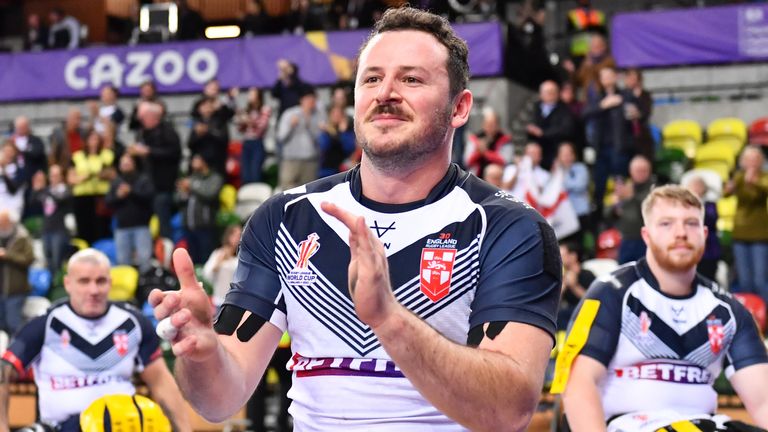 England wheelchair star Seb Bechara has been named winner of the Golden Boot for his efforts in helping the team reach the final of the Wheelchair Rugby League World Cup.

Bechara becomes the second England player to win the award in the wheelchair category, following team-mate Jack Brown who claimed the inaugural accolade for the best international wheelchair rugby league player in 2019 and was among this year’s nominees too.

“It means a lot,” Bechara told Sky Sports. “There has been so much hard work in the shadows for such a long time.

“People say I’m not a massive try-scorer, I’m the one who does a lot of hard work nobody really sees, so it’s really special to have that recognition and know the hard work pays off.”

Manu, who plays centre for Sydney Roosters, has been a revelation at full-back for the Kiwis both in the mid-season Test against Tonga and their run to the World Cup semi-finals.

Manu’s compatriot McGregor becomes the first New Zealander to win the women’s award, having played a starring role in the Kiwi Ferns reaching the women’s final where they face Australia.

The men’s award was introduced in 1984, with the women’s and wheelchair prizes following in 2018 and 2019 respectively. They were brought back this year following a two-year hiatus due to Covid-19.

The consolation for both Williams and Radley is an appearance in the men’s team of the tournament at scrum-half and loose-forward respectively. Prop Tom Burgess was named in the front-row as well.

Meanwhile, England quartet Tara-Jane Stanley, Vicky Molyneux and Vicky Whitfield are all in the starting 13 of the women’s team, with Golden Boot nominee Winfield-Hill on the interchange bench.

Bechara, Brown and Joe Coyd are the three England players named in the wheelchair team of the tournament, with Wales captain Stuart Williams included as well.