A fine solo effort from John McGinn wasn’t enough for Scotland as their unbeaten run ended with a  2-1 defeat away to Turkey in a friendly on Wednesday night.

With both nations missing out on the World Cup in Qatar, this was the start of their preparations for Euro 2024 qualifying but it was Turkey looking better set for that campaign for the first hour.

The standout Hakan Calhanoglu twice tested Craig Gordon from distance early on before crossing for former on-loan Liverpool defender Ozan Kabak (40) to head the hosts in front just before the break.

The marking from Scott McTominay and Grant Hanley at that free-kick was loose and Kabak had already rattled the bar from a corner, with Scotland looking vulnerable from set-pieces.

The hosts deservedly went two clear when Cengiz Under (49) squeezed his shot through the legs of Scott McKenna after a quick counter-attack and it was turning into a worrying night for Steve Clarke’s side, regardless of the seven changes they’d made from their Nations League promotion-clinching draw with Ukraine last time out. 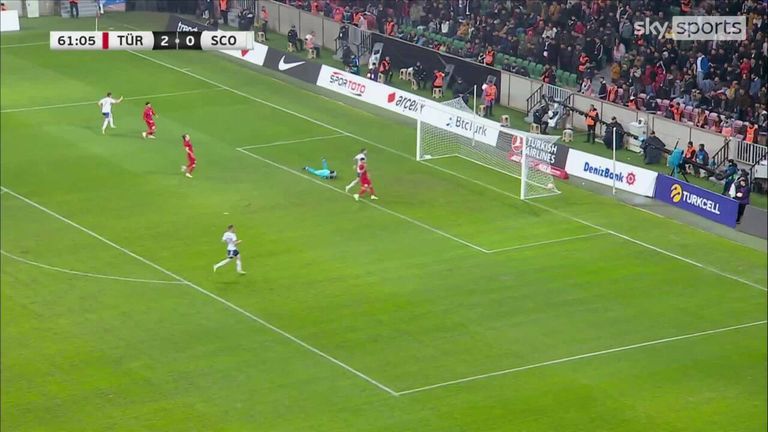 John McGinn pulls one back for Scotland, as his fantastic run and super finish makes it 2-1.

But McGinn’s (62) driving run away from Caglar Soyuncu and excellent finish into the far corner inspired his team-mates, who saw a penalty appeal waved away and had Jack Hendry head over the bar as they pushed for an elusive equaliser during a much-improved final half an hour.

Scotland finished the match with Gordon up for a last-gasp corner but there was no way back. Their four-game unbeaten run may be over but there was encouragement late on to take into their Euros qualifiers, which begin on March 25 against Cyprus.

Scotland below their best but finish strongly

Scotland celebrated promotion to Nations League Group A last time out, a significant achievement which underlined the strides forward they’d made under Clarke. Their record of just two defeats in 15 games in all competitions going into this friendly demonstrated that too.

But for an hour in south east Turkey there was not much evidence of Scotland having progressed to be a top-tier European side. 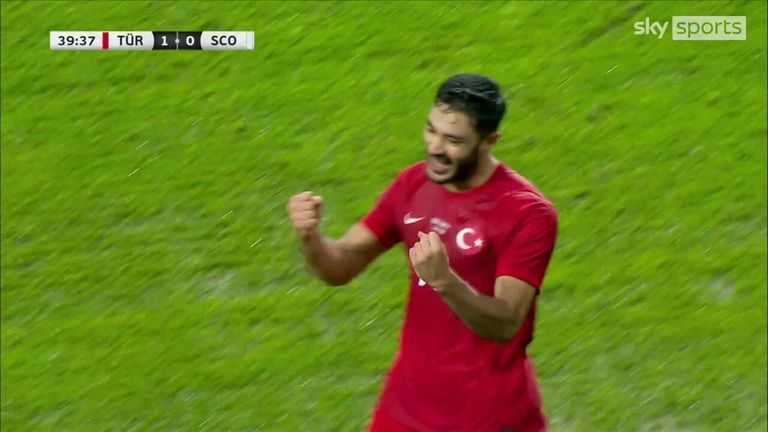 They were exposed repeatedly from set-pieces, with Kabak threatening twice before eventually scoring his side’s opener. They were caught on the counter-attack for the second, with sub McKenna backing off and Kieran Tierney out of position before Under’s accurate finish. Cengiz Under makes it 2-0 to Turkey in their international against Scotland, slotting it beautifully into the bottom left corner.

In midfield, Billy Gilmour couldn’t get on the ball, with Turkey bossing possession and spending long periods in the Scotland half, while there were only off-target headers from Lyndon Dykes and a couple of crosses through the six-yard box to shout about in attack.

Their performance shifted significantly after McGinn’s goal, though. Suddenly Scotland were using the ball better, playing with some swagger and causing a threat, motivated by a moment of magic from their midfielder.

A strange incident which saw Irfan Kahveci catch Dykes in the face with an elbow after jumping at a corner with his back to the ball should have been given as a penalty and the visitors looked the most likely to score late on.

They may have lost but Scotland’s final half hour of football in 2022 was positive – a good reflection of where this side are overall. Scotland boss Steve Clarke, missing his Celtic internationals and a number of other regulars, will keep the performance and result in perspective. The real work starts again for this team in four months’ time…

McGinn: A huge learning curve for us

Scotland’s John McGinn: “It was a tough game to start with, a very difficult pitch and it took us a bit of time to adapt. Craig pulled off a few good saves but eventually we got a foothold in the game.

“Unfortunately something we’ve become so strong at – defending set pieces – it was a poor goal to lose. We go in at half-time one down. We changed the shape. Lost a poor goal. But we finished the game as strong as we could have and probably could have taken a draw away. A huge learning curve for us.”