Lewis Hamilton vs Max Verstappen: The dramatic story and aftermath after FIA mistakes led to the title being decided on the last lap – of the final race…; Formula 1 returns to Abu Dhabi this weekend, with all sessions live on Sky Sports F1

Fresh off their latest on-track skirmish in Brazil, Lewis Hamilton and Max Verstappen return to the scene of what is surely the most extraordinary, and most controversial, F1 championship finishes of all time this weekend.

While there is no title decider this year – with Verstappen having long sewn up his 2022 crown – the tale of last year’s duel in the desert is well worth re-telling as the pair hit the Yas Marina track for the first time since a hugely contentious finale.

Building up to Abu Dhabi: How did it get to this?

Hamilton and Verstappen enjoyed a respectful relationship up until last year – with the pair rarely in direct wheel-to-wheel combat – but the 2021 campaign saw them embark in a ferocious clash of F1 eras.

Hamilton, aiming for a record eighth championship, and young superstar Verstappen’s rivalry was simmering through a closely-matched first portion of the season. It was to ignite with big crashes at Silverstone and Monza, with tempers also flaring between Mercedes and Red Bull and their respective team bosses, Toto Wolff and Christian Horner, both of whom felt their lead driver was being unfairly treated by F1’s governing FIA and race director, Michael Masi.

That intensity, and an extremely close on-track duel, played out into the final races of the season, when yet more controversy arrived in Brazil, with Verstappen handed a penalty for a late move on Hamilton. Then in Saudi Arabia multiple punishments came the Dutchman’s way for separate incidents against his rival.

It meant they arrived in Abu Dhabi the following week with not only their emotions on a knife-edge but also the world championship. Hamilton and Verstappen were locked on 369.5 points apiece ahead of the Abu Dhabi GP, an epic winner-takes-all title decider…

Setting the scene to the title-deciding drama

Verstappen secured pole position ahead of Hamilton for the race, while he also held a tyre advantage over the Englishman for Sunday’s eagerly anticipated start on the soft tyre compared to the mediums.

It was Hamilton, though, who led into the first corner, while he also then survived the first flashpoint of the day after Verstappen flung his Red Bull up the inside of Turn 6, only for Hamilton to take to the run-off area and retain his lead. Red Bull protested to Masi, but race stewards deemed no investigation was necessary.

After that, as Sky Sports F1 commentator David Croft notes, the race was “something of an anti-climax because it was quite apparent that Hamilton and the Mercedes were infinitely better than Verstappen and the Red Bull.”

Heading into the closing stages, Horner even told Sky on the pit wall: “We’re going to need a miracle in these last 10 laps.”

Horner, Red Bull and Verstappen got that miracle soon after.

‘This has been manipulated man’ | How the controversy played out

Running a lapped-16th, Williams driver Nicholas Latifi crashed into the barriers on Lap 50 of 58 while chasing Mick Schumacher. A nightmare for Mercedes.

A Safety Car was called but the timing of the incident left the leading world champions with a near-impossible strategy decision.

Pit Hamilton onto fresh tyres and risk the race ending behind the Safety Car… or not pit Hamilton, keep the lead, but risk the race restarting and Verstappen hunting Hamilton down on new soft rubber.

Not believing the race could get restarted in time due to the regulations on restarts and lapped cars, Mercedes opted for the latter. Red Bull, unsurprisingly, did the opposite, pitting Verstappen.

Verstappen re-joined the track with five lapped cars between him and Hamilton.

On Lap 56, two from the end, the world TV feed displayed the message from Race Control: “Lapped cars will not be allowed to overtake.” It therefore seemed this race was done, regardless of whether it was restarted.

In a conversation played out a lap later, Horner asked Masi: “Why aren’t we getting these lapped cars out the way?”

Masi replied: “Christian, just give me a second. My main big one is to get this [Latifi] incident clear.”

Then, in a dramatic U-turn, on the penultimate lap and lapped runners were now instructed to overtake, although only the five between the two title contenders and not those further back in the pack behind Verstappen, as the rules state.

It was also soon also signified that the race would restart for a dramatic winner-takes-all 58th and final lap, which also represented a different interpretation of the regulations on Safety Car restarts.

“No Michael no, this is so not right!” said an outraged Toto Wolff from the Mercedes garage.

Hamilton – forced into a final-lap showdown against Verstappen but on much older hard tyres compared to Verstappen’s new softs – tried to defend against the Red Bull but was overtaken down the inside of Turn Five.

With more straight-line speed, he nearly hit back into the Turn Eight hairpin but was forced to the outside by Verstappen.

“This has been manipulated man,” said a distraught seven-time world champion in the closing corners.

Verstappen crossed the line as a champion. Cue pure elation, and bedlam, in the Red Bull cockpit and garage. Cue disbelief at Mercedes.

What happened next? The immediate aftermath…

Despite the huge disappointment of the stunning late turnaround just as he appeared on the cusp of yet more history, Hamilton sportingly went straight over to congratulate Verstappen in parc ferme.

Hamilton’s father, Anthony, did likewise with Max and his dad, Jos.

“Firstly congratulations to Max and to his team. I think we did an amazing job this year,” said Hamilton.

But he was obviously, and understandably, a broken man.

Mercedes, meanwhile, were quick to protest the result, alleging that as Masi hadn’t followed the regulations correctly, Hamilton would be the race, and championship, winner. 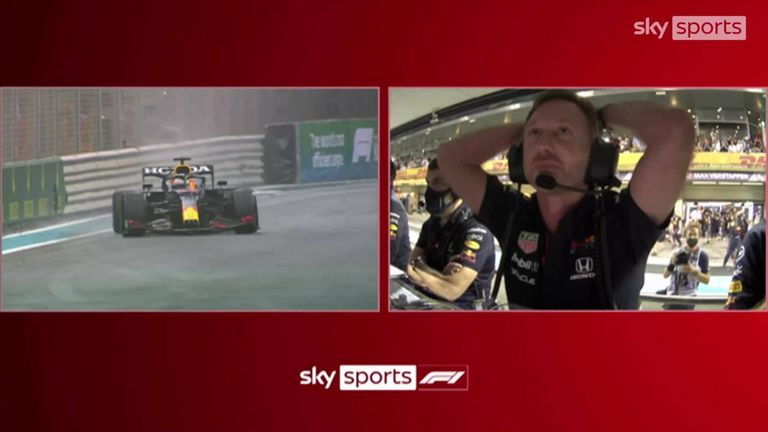 Their protests were soon thrown out by the stewards.

The team then threatened further appeal to the FIA’s International Court of Appeal – only to then pull out after the FIA said they would conduct an “analysis and clarification exercise” on what unfolded.

Mercedes, surely knowing that the FIA were never really going to rule against themselves in an appeal, said that having been in “constructive dialogue” with the FIA and F1, they welcomed the governing body’s steps and now would work with stakeholders to “build a better Formula 1 – for every team and every fan who loves this sport as much as we do”.

Neither Hamilton or Wolff attended the FIA’s Awards Gala, where Verstappen was officially made champion.

Following public outcry, an inquiry, and months of speculation, in February the first of the FIA’s rulings came in. Masi was ousted as race director, a scenario that always seemed likely given the title-defining mistakes.

Many changes were also outlined as a result of the inquiry, such as stopping team bosses being able to radio into the race director and a Virtual Race Control Room to assist in officiating, similar to VAR in football.

There was also a new refereeing structure for 2022, with Masi replaced by two rotating race directors, Eduardo Freitas and Niels Wittich. 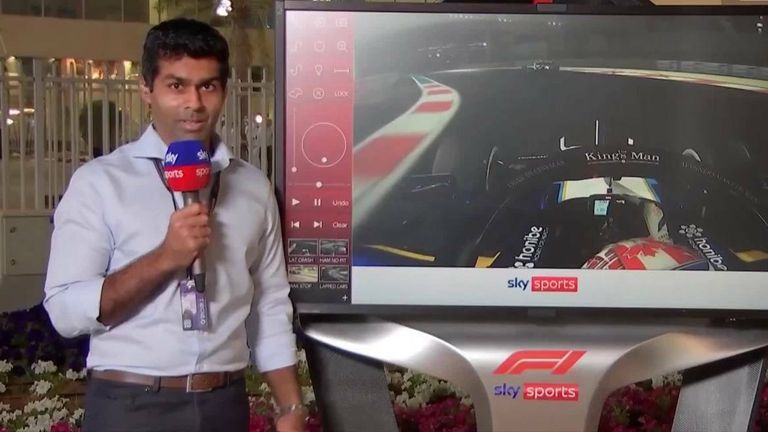 There have, meanwhile, been changes to the sporting regulations, which now state that “all” cars must be permitted to unlap themselves.

But F1 fans would have to wait until minutes before the first qualifying session of the season – in Bahrain in March – before the full report, or what the FIA called an “executive summary”, was released. The wrongdoings were made evident.

How Hamilton and Verstappen, Merc and Red Bull, reacted to the madness

From Red Bull and Verstappen’s side, they had not done anything wrong in Abu Dhabi, nor were they undeserving champions.

Verstappen had won more races, had more bad luck over the season, and put up a sterling maiden title challenge up against F1’s most successful driver of all time.

“When you look at the season as a whole, he was the outstanding and deserving champion,” argued Horner.

They also argued against the punishment for Masi. “For me it’s very unfair what happened to Michael because he’s really been thrown under the bus,” said Verstappen. 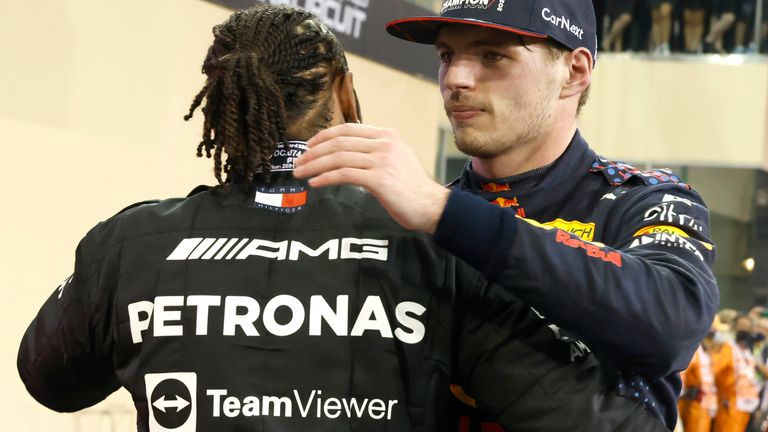 Horner added: “He didn’t break the roles. he may have applied them slightly differently in that circumstance, but he didn’t contravene the rules.”

Wolff claimed Masi was “turned” by Red Bull over the course of the season, leading into that most dramatic decider.

“Out of nowhere, everything we knew about regulations in Formula 1 was thrown away,” he added.

There were even doubts for some time that a “disillusioned” Hamilton, who hadn’t made any comments publicly – on social media or otherwise – since his comments at parc ferme, would consider his F1 future.

Eventually, Hamilton agreed to return but admitted: “I think ultimately a sport that I’ve loved my whole life, there was a moment where I lost a little bit of faith within the system.”

Has F1 learnt from Abu Dhabi?

Verstappen was more than a worthy champion in 2021, and his utter dominance this year has only proved just how good he is. But one must also feel sorry for Hamilton, who was similarly more than a worthy winner of that title-deciding race. Both those statements can be true.

It was not Verstappen or Hamilton’s, but the FIA’s, mistakes that led to one of F1’s finest seasons ending with the most controversial result.

So as we head back to Abu Dhabi, has F1’s governing body learnt? 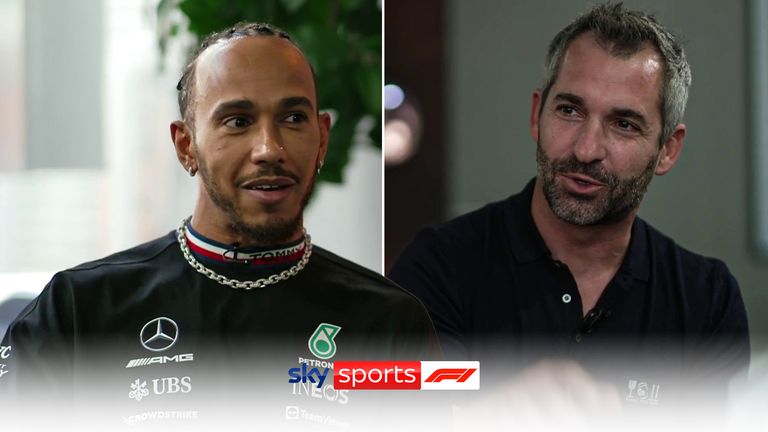 In many ways, yes. While many drivers respected Masi’s willingness for racing over the years, this season there have been more black-and-white rules on wheel-to-wheel battles and track limits, an improvement from far less bartering from teams to the FIA, while Monza – a race that ended behind the Safety Car – was as clear as evidence you’ll see that the sport had learned from the Abu Dhabi ending.

“There’s only one time in the history of the sport where they haven’t done the rules like that today and that’s the one where it changed the result of the championship,” Hamilton told Sky Sports in September. “But it is what it is.”

Yet, there have also been glaring reminders of the steps needed to take, with Pierre Gasly’s recovery vehicle near-miss at the Japanese GP and the bizarre penalty U-turn for Fernando Alonso in the USA just two examples.

The FIA has also already gone back on its word of having rotating race directors for the season, with Wittich now installed as a permanent race director.

There is, though, still hope and belief from drivers and teams that the FIA’s structure is now much better suited to deal with a bizarre set of circumstances such as Abu Dhabi.

And as Hamilton said last February: “We have to use this moment to make sure it never happens again.”

Watch the final race of the 2022 Formula 1 season all live on Sky Sports F1 this weekend. Sunday’s race is live at 1pm, with extensive build-up from 11.30am.