“I was almost blacked out there for a little bit. It went by in a heartbeat, but at the same time was a long day,” said RSM Classic leader Cole Hammer; his fellow American Ben Griffin sits a shot back in second on seven under, while England’s Callum Tarren is tied for third on six under 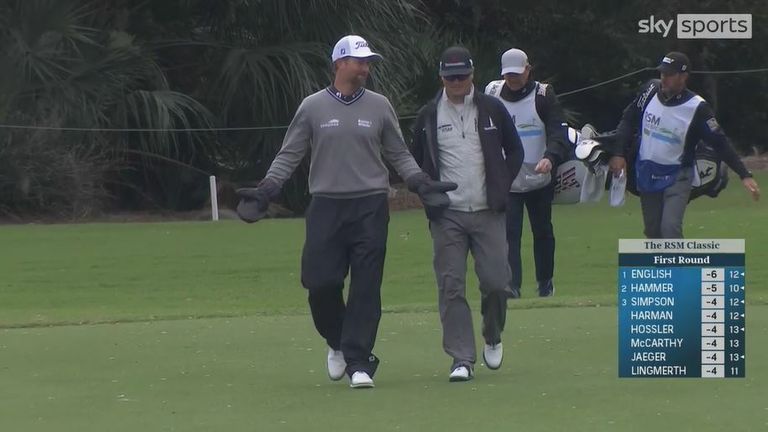 Cole Hammer piled up nine birdies en route to an eight-under 64 which gave him the first-round lead at The RSM Classic in Georgia.

Hammer played his first round at Sea Island Golf Club’s Plantation Course and started on the back nine. He birdied nine of his first 16 holes to get to nine under before a bogey at the par-five eighth hole.

It was enough for a one-shot advantage over fellow American Ben Griffin, who took second with a seven-under 65.

“I mean, I was almost blacked out there for a little bit,” Hammer said of his career-low round. “It went by in a heartbeat, but at the same time was a long day.”

After starting with four birdies on the back nine, Hammer added birdies on holes one, two, four, six and seven.

“I almost made a birdie putt on 18, my ninth hole today, to go five under. And then I hit my best drive of the day on No 1, my 10th hole, and that swing gave me some confidence,” Hammer said.

“I hit a wedge like two feet and knocked that in. Then made a 15-footer on the next hole for birdie, which was a complete bonus.”

Griffin shot a bogey-free card with seven birdies on the Plantation Course. He makes his home in town and is familiar with the local courses.

“It’s an easy commute. Should have walked,” Griffin said. “A couple stop lights held me back this morning.”

Beau Hossler and Englishman Callum Tarren shot the low rounds of the day at the Seaside Course at six-under 64. They are tied for third with Justin Suh, who had a six-under 66 at the Plantation Course.

Eleven players are tied at five-under, including Webb Simpson, who had a hole-in-one at the par-three third on the Plantation Course during his round of 67.

“My target was about 15 feet right of the hole there, so I did pull it, but I did hit it good enough to where I knew it would cover on that line,” Simpson said. “And I do love my hybrids.”

Watch The RSM Classic throughout the week live on Sky Sports. Live coverage continues Friday with Featured Groups from 2.15pm on Sky Sports Golf, ahead of full coverage from 6pm.