Jarome Luai and Nathan Cleary. The Lennon and McCartney of the NRL. The heartbeat of a Penrith Panthers team which has thrown of the tag of being the competition’s nearly men to become back-to-back Grand Final winners.

But now, for Saturday afternoon only, rivals. Because the Panthers’ half-back duo will be on opposing teams aiming for the sport’s biggest prize as Australia and Samoa go head to head at Old Trafford in this year’s Rugby League World Cup final.

Not since his junior days playing for St Mary’s Saints in the Penrith District competition has Luai been on the opposing side to Cleary, who lined up for Penrith Brothers back in the day, but the stand-off cannot wait to be up against him again as Samoa aim to make history by lifting the Paul Barriere Trophy for the first time.

“But there are no friends out there on the field, only brothers and enemies, and I’m always going to look at it the same way. I can’t wait to get out there against him.

“We’ve not played against each other at a real high scale or anything like that, but it’s pretty big stakes this time around.”

Sydney-born Luai, whose paternal grandparents are Samoan, has become a mainstay of the Samoa team since being included in their squad for the last World Cup five years ago despite having yet to feature in the NRL at that point in time. 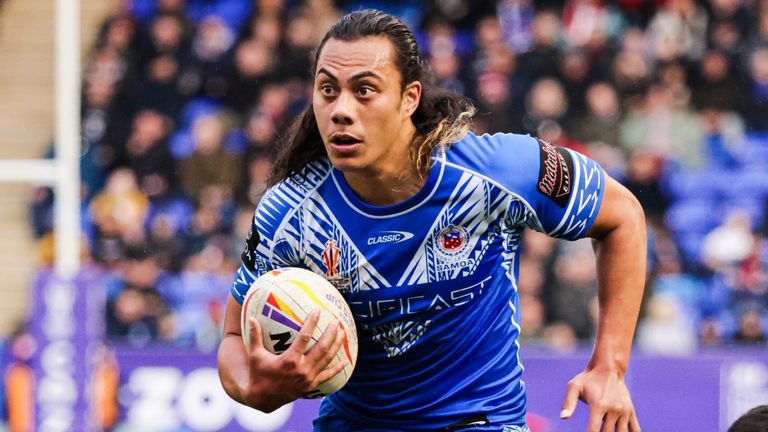 There are no friends out there on the field, only brothers and enemies, and I’m always going to look at it the same way. I can’t wait to get out there against him.

Cleary, meanwhile, is involved in his first World Cup after being one of 13 uncapped players called up by Australia head coach Mal Meninga for the Kangaroos’ 24-man squad.

The 24-year-old has emerged ahead of Manly Sea Eagles captain and 2013 World Cup winner Daly-Cherry-Evans as Meninga’s first-choice scrum-half at this year’s tournament in England, although received criticism from some quarters for his display in last Friday’s 16-14 semi-final win over New Zealand.

Cleary admits he has not hit the heights he expects from himself during the World Cup yet is feeling settled in the role and the Manchester United fan is relishing the prospect of stepping out onto the field at Old Trafford for one of rugby league’s biggest occasions.

“I feel like I do belong and feel like I’ve got a long way to go to play my best footy but I’m doing everything I can to prepare well and try and get my best game out this weekend,” Cleary told Fox League. “The last few games haven’t been my best, but I feel like I’ve been building.

“I’m never going to be owed the jersey, I’ve got to always earn it and that comes from each training session and each game. There’s no better stage to do it than the World Cup final.

“I’m very narrow-minded by living in the present and living each day as it is, and just trying to be a good team member – and that’s how you get the best out of yourself on gameday.”

Reigning champions Australia are odds-on favourite to secure a 12th World Cup title on Saturday after cutting a swathe through the competition and then edging out world-ranked No 1 New Zealand at Elland Road in the semis – a match which saw Cleary’s fellow Panther Liam Martin named player of the match.

Samoa have steadily improved from their 60-6 defeat to England in the opening match of the tournament on October 15 though, which was underlined by them gaining revenge over the host nation via a 27-26 golden-point win in their semi-final at the Emirates Stadium last Saturday.

Golden Boot nominee Luai played a starring role in that win along with Penrith team-mate Stephen Crichton, who scored two tries and kicked the game-winning drop goal to send the Pacific Islanders into the final for the first time.

Other Panthers players in Taylan May, Brian To’o and Izack Tago have all made important contributions for Samoa too, and that connection formed at Penrith has helped put Samoa on the verge of shaking up rugby league’s long-established international order.

“It started at Penrith for me and the other boys here,” Luai said. “We made a commitment to each other that when the right time came, we were going to play for Samoa.

“It has all come to fruition now and we’ve done something really special together. As you can see, the job is not finished.”