England aim to lift the Wheelchair Rugby League World Cup for the first time since 2008 when they face two-time winners and reigning champions France on Friday; the final takes place at Manchester Central (kick-off 7.30pm)

On Tuesday night, ahead of this Friday’s Wheelchair Rugby League World Cup final, head coach Tom Coyd and the England squad went for a meal at the venue co-owned by former star of the running game Nathan McAvoy.

Whether Coyd quite succeeded in his efforts to tempt the Challenge Cup-winning winger into taking up the wheelchair game remains to be seen, but he is in no doubt one former top-level player deciding to do so will take the sport on even further than the highs it has hit during the World Cup.

What is arguably the most inclusive sport in the world allows disabled and non-disabled men and women of all ages to compete on an even playing field and has won a whole new audience of admirers who have marvelled at the skills and physicality on display during this tournament.

Host nation England have been at the forefront of that too, now being just one win away from lifting the trophy for the first time since 2008, and Coyd is in no doubt there is still more to come whatever the outcome of Friday’s final against France.

“It’s brilliant exposure for the game and it probably has been sport’s best-kept secret for a while now because it has so many unique elements to it,” Coyd told Sky Sports.

“There are not many games where you can play with everyone on a level playing field and it’s an amazing game which is finally getting the recognition it deserves.

“The watershed moment for the game in England is going to be when an ex-player hangs up their boots and takes up the wheelchair game to maintain the level of high intensity and high-level elite engagement. 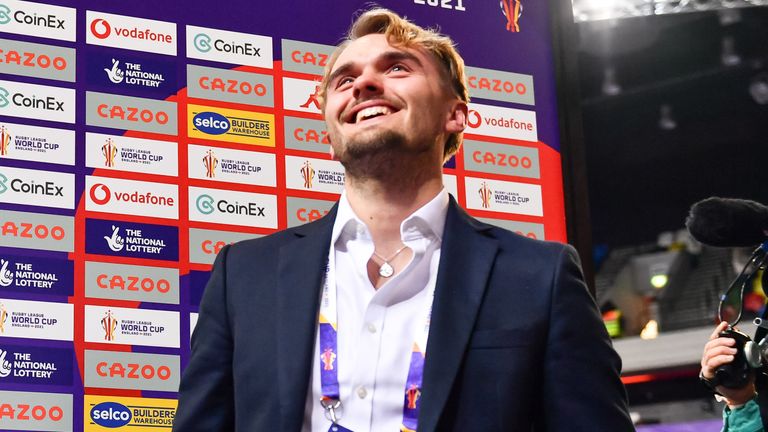 There are not many games where you can play with everyone on a level playing field and it’s an amazing game which is finally getting the recognition it deserves.

“Don’t get me wrong, though, the whole chair control thing is a huge part at the start, and you have to spend a few years and thousands of hours getting that part right.”

One of the leading lights for England on their run to the final has been one of the disabled members of the squad, though, with Seb Bechara being named as this year’s winner of the wheelchair Golden Boot for the leading player in the international arena.

The Nottingham-born Catalans Dragons player picked up the accolade on Tuesday, with 2019 winner and England team-mate Jack Brown among the nominees. The duo were included in the wheelchair team of the tournament for the World Cup along with Coyd’s younger brother Joe as well.

“It means a lot,” Bechara told Sky Sports, reflecting on the efforts he has put in down the years to reach this point. “There has been so much hard work in the shadows for such a long time. “People say I’m not a massive try-scorer, I’m the one who does a lot of hard work nobody really sees, so it’s really special to have that recognition and know the hard work pays off.

“I live in the south of France, and I’ve spent years having to travel back and forward to England for all of the wheelchair camps, and I remember four years ago I had to pay for every single flight myself.

“I had to move here for four to six months away from friends and family, my girlfriend and work just to focus on this World Cup. The hard work is a lot of training, but a lot of sacrifice as well.”

Bechara, who has lived in France since the age of 10, had previously played rugby union before losing his leg in a motorbike accident, while Brown took up the sport to play alongside brother Harry, who has since transitioned to becoming a Great Britain wheelchair basketball international. 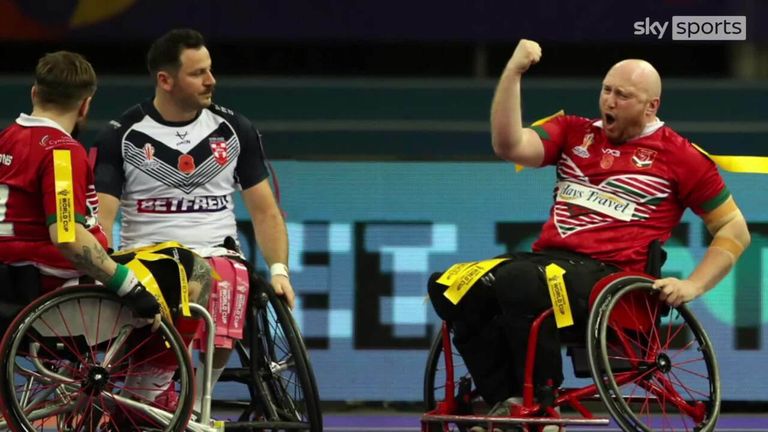 Coyd is pleased both found the wheelchair variant of rugby league, with both having become mainstays of the England team and Brown’s involvement stretching back to that first wheelchair World Cup in Australia 14 years ago.

“The pair of them are just crazy-level athletes,” Coyd said. “They could probably be successful in any sport they engage in, and wheelchair rugby league is blessed they chose our game.

“They’re so good to watch as a spectator and as a coach, they’re a pleasure to work with. They put so much passion and energy into their craft and you talk about people who work hard in different industries, I’ve never seen two lads work so hard on their game.

“They’ve both got full-time jobs as well, so they deserve all the recognition they get. It was really nice for Joe to get in the team of the tournament as well, but as a team everyone is getting a good level of recognition.” 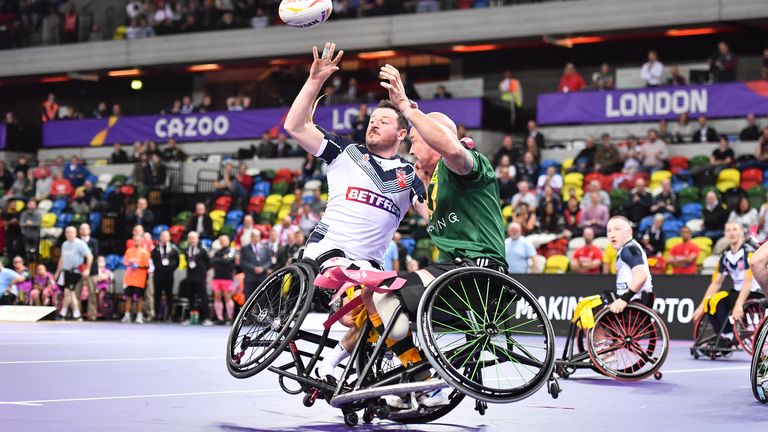 It’s the most important game of our lives, we’re ready for it and we think we’ve got what it takes.

Both England and two-time winners France have cemented their places as the leading wheelchair rugby league nations at this tournament, with both going through their respective groups unbeaten. England then overcame Wales in the semi-finals, while the reigning champions battled past Australia in the last four.

This will be the third final in a row the two cross-Channel rivals have met, with France edging out England by two and four points respectively in 2013 and 2017. However, Coyd’s side go into this having won the most recent meeting between the teams when they triumphed 62-48 in June.

With the men and women being eliminated from their respective tournaments in the semi-finals, the wheelchair side are carrying the hopes of home World Cup success in Friday’s showdown at Manchester Central – something 2017 finalist Bechara has been dreaming of for a long time.

“Every minute of the day and night I’ve got these images of French players popping into my head, me tackling them and it’s just non-stop, always in there,” Bechara said.

“Even before the Wales game, my thoughts were on France and it’s how I knew we were going to meet again. It’s the most important game of our lives, we’re ready for it and we think we’ve got what it takes.”