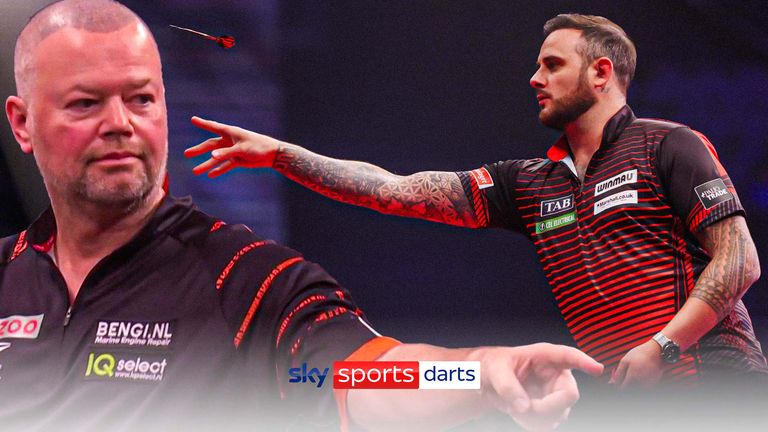 Raymond van Barneveld produced one of the most remarkable comebacks in Grand Slam of Darts history to stun reigning champion Gerwyn Price and set up a semi-final showdown against Michael Smith in Wolverhampton.

The 55-year-old – featuring in his first televised quarter-final since November 2019 – recovered from 8-3 down to send Price packing on an exhilarating Friday night in Wolverhampton.

The five-time World Champion – who only came out of retirement last February – rolled back the years to inflict Price’s first defeat in a knockout tie at the Aldersley Leisure Village.

A fairy-tale week for RVB

Provisionally seeded for the World Championship

Barney will take on Michael Smith for a place in Sunday night’s showpiece, after Smith recovered from 15-13 down to edge out Joe Cullen in a gripping last-leg decider.

Van Barneveld defeated Price in a thrilling group-stage tussle earlier in the event, and he repeated the feat to secure his place in a first Grand Slam semi-final since 2015.

The 2012 champion missed darts to win each of the first two legs, and despite landing a 10-darter to open his account, he trailed Price 3-2 at the first interval with a 107 average.

The doyen of Dutch darts followed up his third 180 with a 98 finish to level inside 12 darts, but he paid the price for squandering two darts in leg eight, as a trio of 13-darters catapulted Price into a 7-3 lead before Welshman extended his winning run to five legs as he threatened to run away with the tie. 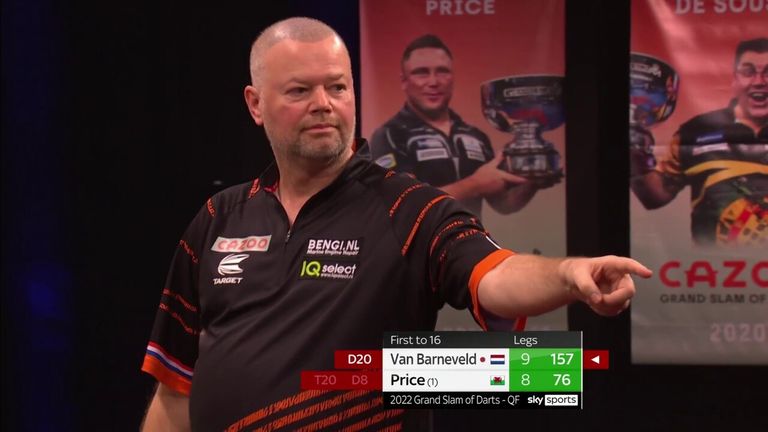 But Van Barneveld launched a stunning revival, punishing seven missed doubles across three legs from Price to make it six legs without reply, before raising the roof with a spectacular 157 finish to move 10-8 ahead.

Van Barneveld was riding the crest of a wave, wiring the bull for a show-stopping 170 finish as Price finally stopped the rot, but the former Premier League champion responded with a two-dart 78 combination to restore his two-leg buffer. 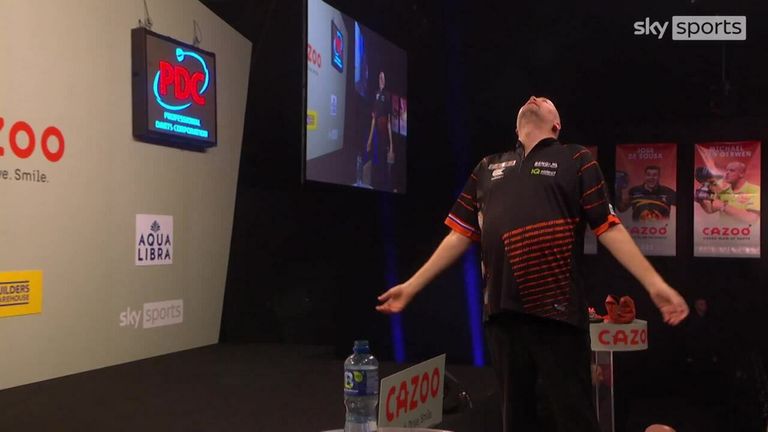 He continued his astonishing run with legs of 13 and 12 darts to stretch his advantage to 13-10, and with Price faltering on the outer ring, Van Barneveld pinned double four to move to within two legs of a famous victory but Price reeled off three straight legs to make it 13-14, featuring a 12-dart break in leg 26.

However, with the world No 1 poised to make it 14-14, Van Barneveld sank a nerveless 71 finish on tops to move one leg away, before firing in a stunning 13-darter to cap off an inspired display. 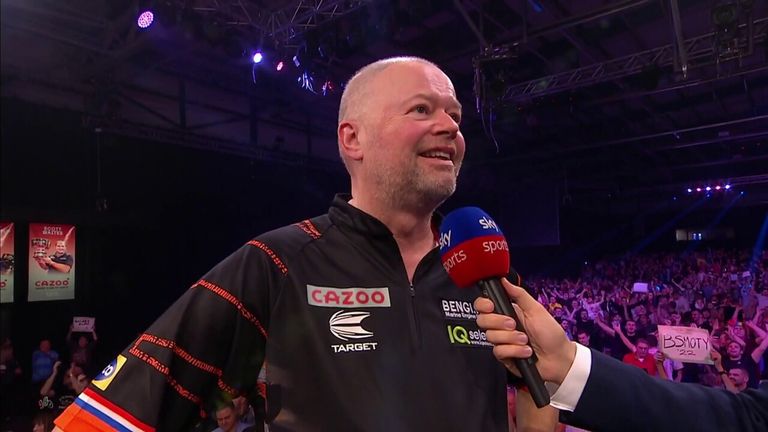 “I was struggling for many years, but I’m so happy right now. What a feeling,” reflected Van Barneveld, through to his first ranking semi-final since the 2017 World Championship.

“I’m probably in the top five players of all-time along with Phil Taylor, Michael van Gerwen, Eric Bristow and John Lowe, and everyone knows I can do this. It is all about belief.”

In the opening quarter-final clash, Smith, the two-time world finalist, raced out of the blocks before suffering a mid-game slump, but he fought back magnificently to prevail in a rollercoaster clash, denying Cullen a single match dart in the closing stages.

Smith enjoyed a profitable opening session, hitting four 180s in as many legs to seize the initiative, although Cullen stayed in contention after the St Helens star spurned three darts for a 4-1 lead.

‘The Rockstar’ then followed up a clinical 116 in leg six with a sublime 170 checkout to restore parity at four apiece, but Smith soon regained control, maintaining his sensational scoring to move 6-4 ahead with a 110 average. 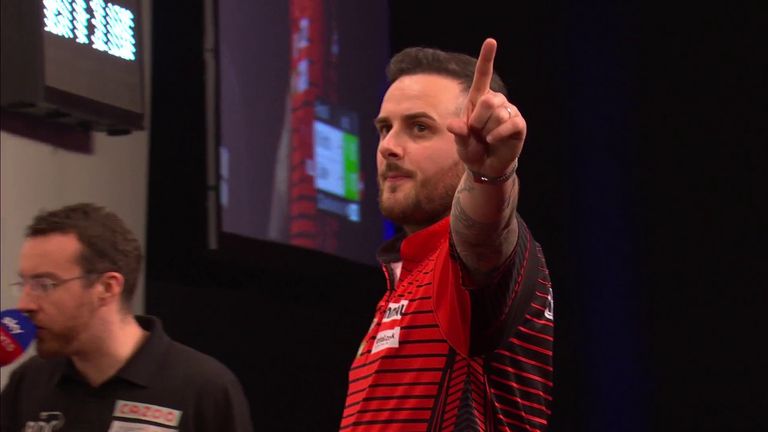 Following a sequence of four straight holds, Cullen punished a sluggish leg from Smith to reduce the deficit to 8-7, and he continued his charge with a 13-dart break in leg 19 to lead for the first time before making it seven legs from eight with a superb 12-darter to lead 12-9.

Smith delivered a spirited riposte, converting 110 and 78 finishes before halting a run of four straight breaks to cut the gap to 13-12.

The Masters champion responded with dominant holds of throw to move to the brink of victory at 15-13, before landing two maximums in leg 29 to pile the pressure on Smith. 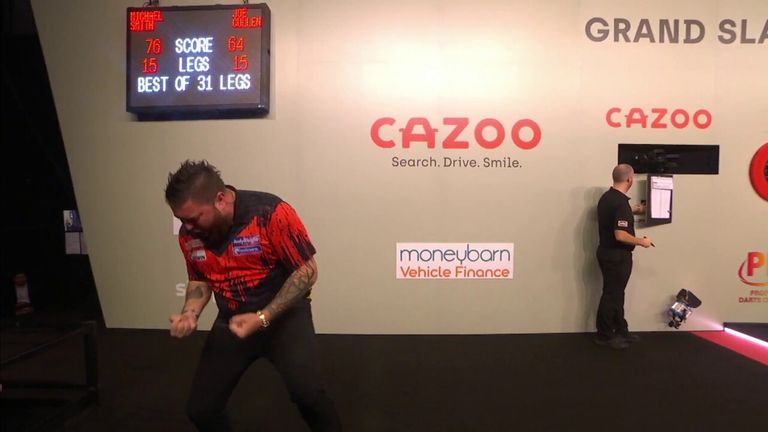 However, the two-time World Championship runner-up was up to the task, following up a skin-saving 70 checkout with a majestic 11-dart break to force a dramatic deciding leg.

‘Bully Boy’ had the advantage of throw in the last-leg shoot-out, and despite Cullen firing in a timely 11th maximum to set up a potential two-darter, Smith sealed his progression with a 76 finish on tops to book his place in Sunday’s semi-finals. 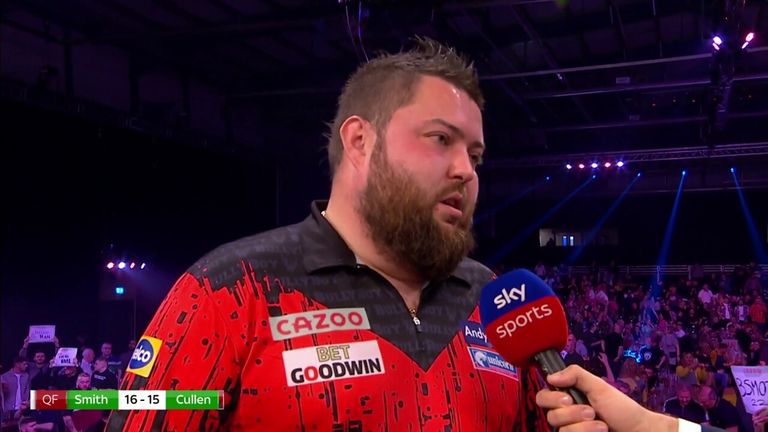 “When I was 15-13 down it was now or never,” admitted Smith, who averaged 100 and landed 14 maximums to prevail in a Wolverhampton classic.

“I feel sorry for Joe because I love him like a brother, but someone had to lose, and I’m so glad I was able to get over the line.”