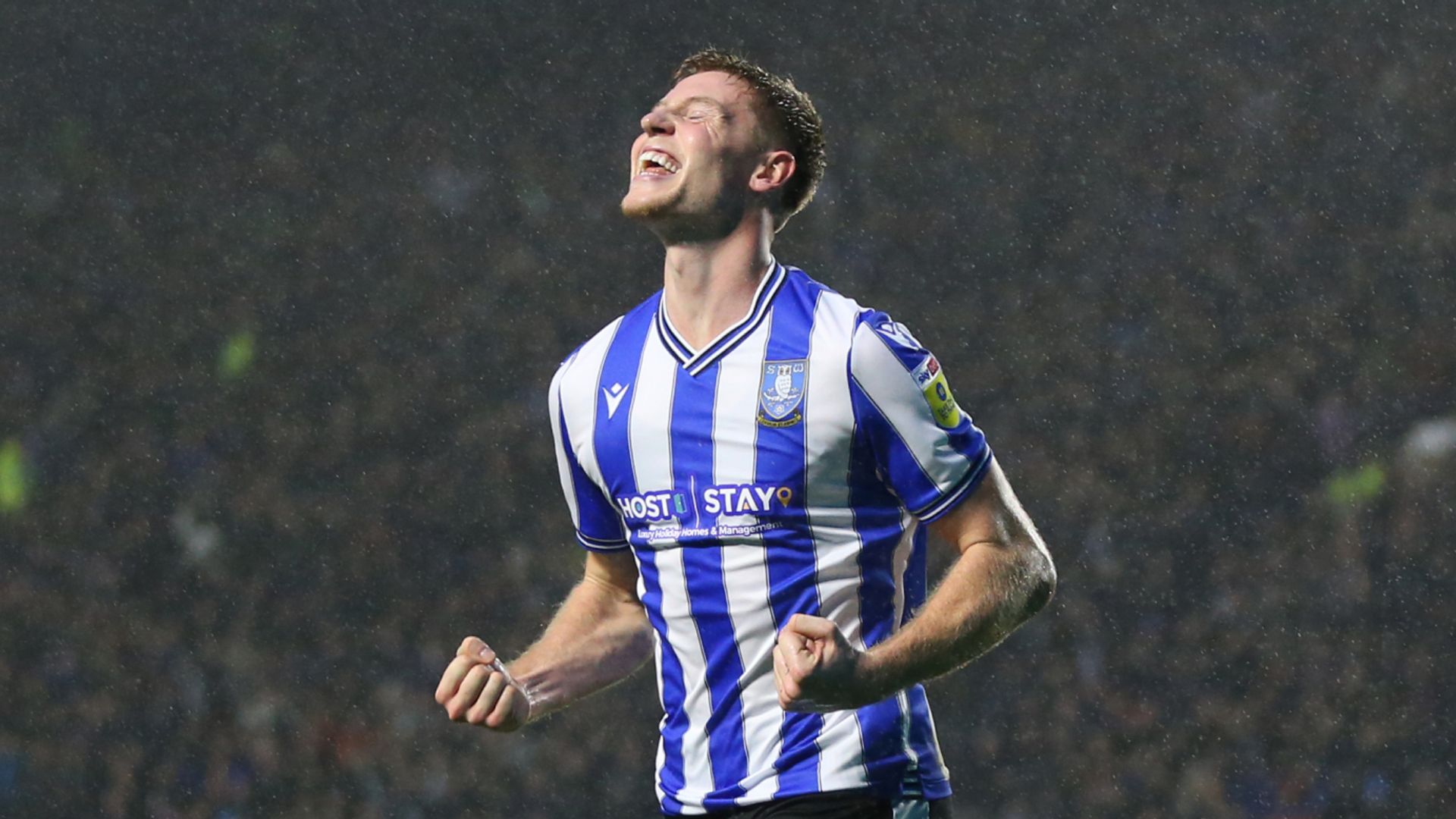 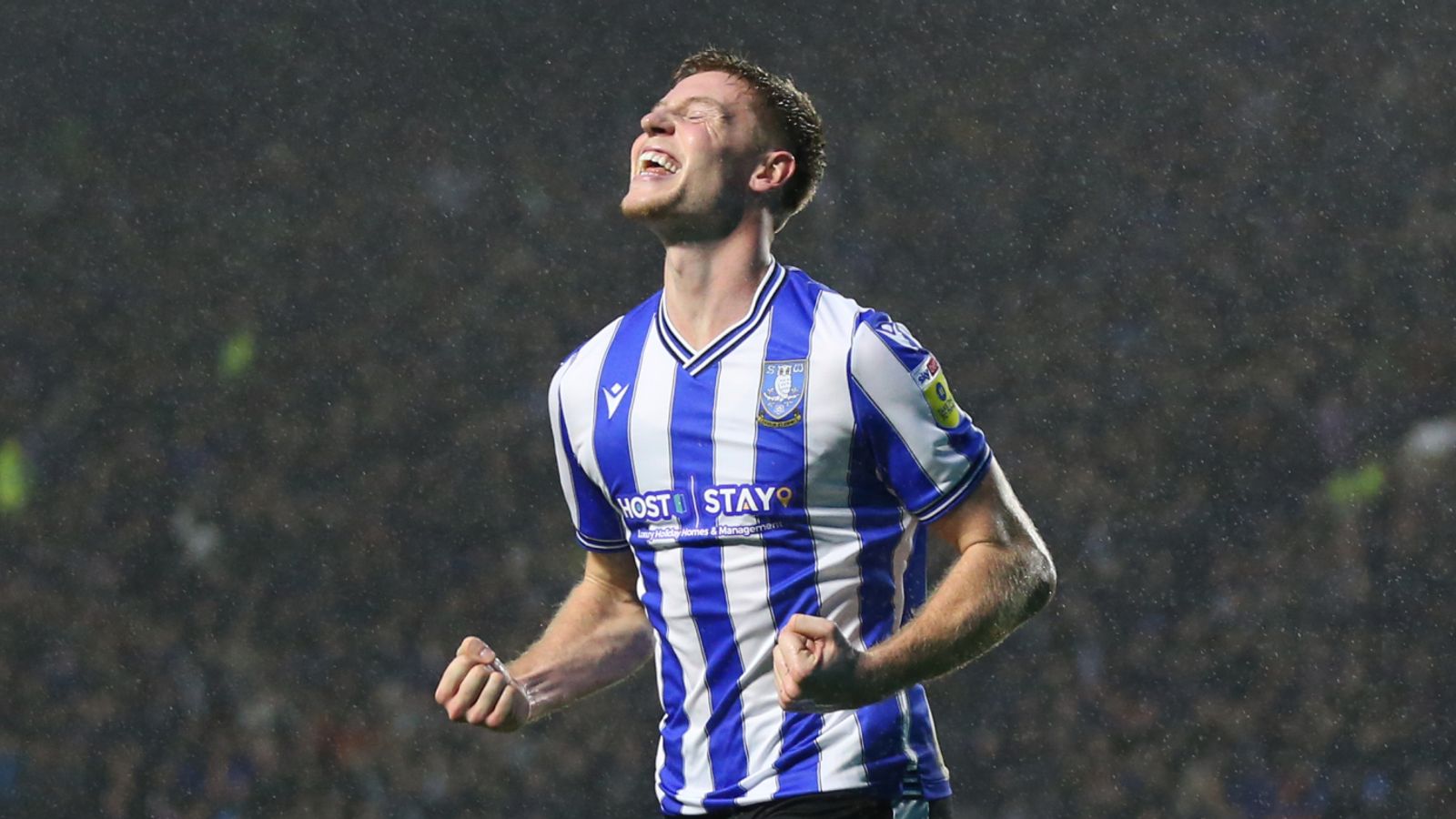 The midfielder’s stoppage-time header – just his second goal in English football in nine years – secured a 2-2 draw for the hosts.

Norwich loanee Bali Mumba’s strike looked to have put the Pilgrims four points clear at the top of the table but they are now only two ahead of Ipswich.

Ryan Hardie levelled from the spot after Bobby Kamwa had given Burton a first-half lead, with the point keeping Burton off the bottom.

Earlier, Ipswich had closed the gap to a point after a 2-0 win over Exeter. Freddie Ladapo and Marcus Harness struck to give the Tractor Boys a comfortable win.

Mark McGuinness’ header kept Sheffield Wednesday a point behind the top two after a 1-0 home win over Shrewsbury.

But fourth-placed Peterborough lost ground on the automatic promotion places after losing 1-0 at Bristol Rovers.

Scott Sinclair grabbed the winner for the Pirates while Posh’s woes were compounded when Ronnie Edwards was dismissed with 15 minutes left.

Barnsley moved into the play-off spots after a 3-1 home win over MK Dons.

The Tykes sit sixth after goals from Jordan Williams, Adam Phillips and Herbie Kane sealed the points after Mohamed Eisa had made it 1-1 before the break.

Bolton also climbed into the top six after a dramatic late comeback at Fleetwood sealed a 2-1 win.

Carlos Mendes Gomes’ classy first-half opener was cancelled out by Conor Bradley when he tapped in from close range with five minutes left before Oladapo Afolayan won it in stoppage time.

Bottom-of-the-table Forest Green earned a morale-boosting 1-1 draw at Oxford after Harry Boyes’ own goal was cancelled out by Jamille Matt.

Morecambe lost 2-1 at Lincoln after Joe Walsh deflected in Matt Sanders’ free-kick to give the hosts the lead and Ben House doubled the lead just after the hour.

Jensen Weir pulled a goal back late on but Morecambe remain in the drop zone while Lincoln move up to ninth.

The Hatters had won six of their last seven games in all competitions and took the lead through Myles Hippolyte in the fifth minute but Darren Pratley equalised 15 minutes later and Omar Beckles netted the winner midway through the second half.

Closest rivals Stevenage are now five points behind in second after Niall Maher cancelled out Jake Reeves’ opener with a last-minute equaliser for Grimsby in a 1-1 draw.

Northampton stay four points behind thanks to a 3-1 away win over fellow promotion chasers Bradford.

Mitch Pinnock’s opener in the 29th minute was swiftly followed by a second from Shaun McWilliams and Sam Sherring made sure of the points in the second half. Andy Cook scored a consolation from the penalty spot in stoppage time.

A whirlwind start saw Barrow defeat Hartlepool 3-1 to climb into the top four.

The Cumbrians continued their formidable home form, with Josh Gordon, Ben Whitfield and Billy Waters all scoring inside the first 21 minutes before debutant Christopher Missilou pulled one back late on.

It was also a good day for Carlisle, who moved into the top six thanks to a 4-1 victory over Salford.

Kristian Dennis put the visitors ahead inside three minutes and, although Matt Smith equalised early in the second half, Callum Guy restored Carlisle’s lead and Corey Whelan and Dennis added further goals.

Colchester climbed off the bottom of the table after ending a seven-match winless run in the league with a 3-0 success against Doncaster.

Alex Newby scored just before half-time and Samson Tovide added a second in the 59th minute for Matt Bloomfield’s strugglers. Luke Jannant’s 89th-minute third was the icing on the cake.

Hartlepool replace Colchester at the bottom while Gillingham are 23rd after a 2-0 defeat by Newport, with Priestley Farquharson scoring both goals either side of half-time.

Luke Armstrong struck twice for Harrogate in a 3-0 victory over Mansfield, with Alex Pattison opening the scoring in the fifth minute and all the goals coming in the first half.

Ayoub Assal scored his seventh goal in eight matches in AFC Wimbledon’s 2-0 win against 10-man Tranmere. Rovers were already one down to Ethan Chislett’s early opener when Dynel Simeu saw red, and Assal grabbed the second with eight minutes remaining.

Danny Johnson struck a stoppage-time winner for Walsall in a 2-1 success against Crawley.

Dominic Telford put Crawley ahead in the 11th minute but Hayden White quickly equalised and the visitors were reduced to 10 men before half-time when Ludwig Francilette saw red.

Crawley looked like they would hold on for a point but Johnson proved to be the hero for Walsall.

Daniel Agyei’s 23rd-minute penalty secured Crewe a 1-0 victory at Swindon while Sutton beat Rochdale by the same score thanks to Will Randall.