Watch the full Max Verstappen interview with Sky Sports F1’s David Croft in our Abu Dhabi GP build-up today; Race show starts at 11.30am, with lights out for the final race of the 2022 season at 1pm

Max Verstappen has opened up to Sky Sports F1 about the extraordinary drama and emotions of his “miracle” last-lap title victory at last year’s Abu Dhabi GP, admitting that he sympathises with Lewis Hamilton over how their “great” championship battle ended.

The exclusive interview – which can be watched during Sky Sports F1’s build-up for the 2022 Abu Dhabi GP today from 11.30am, with lights out at 1pm – sees Verstappen run through the championship finale in detail, from being resigned to defeat to the ecstasy of an overtake on the final lap and a maiden world title.

Verstappen also reveals how he felt for Hamilton amid the controversial ending, with the Dutchman only given the opportunity to stop the dominant Mercedes driver from clinching a historic eighth crown due to an incorrect application of the rules by FIA race director Michael Masi.

“Of course, it was all looking great [for Lewis],” Verstappen tells Sky Sports F1’s David Croft from the scene of the contention, the Yas Marina circuit. “And something like that happens… it is tough.

“You know, there was always going to be one winner and one loser. If you’re on the losing side, it’s going to be bad no matter what. And it also doesn’t matter how, if you lose, you lose. And that it’s just terrible when you’re so close, right?”

Verstappen adds: “The only thing I did say to myself at the time was, he has seven world championships. And he has also won one where it looked like he was losing out, and then in the last corner, he didn’t [referencing the 2008 Brazilian GP]. So I hope that he could understand at least a little bit the difference in emotion.

“But yeah, I felt for him and especially, you know, we had our moments when we got together that year, but I always respected him and I think we did have a great battle.

“And also finally, we had two teams fighting for a championship. I really hope that we can appreciate that someday.”

Verstappen and Hamilton went on to have contrasting 2022 seasons, with Verstappen clinching his second crown with four races to spare. Hamilton, meanwhile, goes into today’s race looking to avoid the first season in his career without a single race win.

“The first few times it definitely gave me goosebumps, for sure,” Verstappen tells Crofty as he recalls watching back what is surely one of the most remarkable conclusions to any sporting season.

In an exclusive Sky Sports F1 interview, he reflects on it again.

He says he had already accepted defeat to Hamilton, who led for 57 of the 58 laps after overtaking the pole-sitting Red Bull. 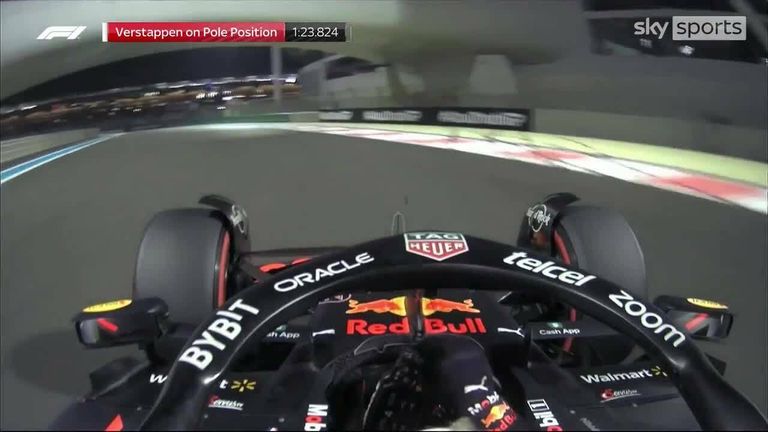 “We just didn’t have that pace like they had,” he admits. “And yeah, it didn’t look good. We tried a different strategy as well, but it wasn’t catching enough, you know, to close that gap.

“At the time I was like, OK, we might not win it, but I’m still going to remember this year as an amazing season. I mean, what we have done as a team, you know, to overcome that deficit we had to them over the years, I think we can be really proud of that.

“But I also said to myself, ‘I’m still going to give it everything I have, every lap until the end.’”

Even ever-optimistic team boss Christian Horner appeared to be in the same boat as he spoke to Sky Sports F1 from the pit-wall. “Christian even mentioned it on the TV, right?” says Verstappen. “We need a miracle right now. And we got it.”

Cue Nicholas Latifi crashing into the barriers with eight laps remaining, meaning a Safety Car – and the closing up of the pack erasing Hamilton’s big lead – appeared inevitable.

“This guy needs to move as quickly as possible,” Verstappen recalls thinking. “We need to race. Yeah, for sure – that was my only chance.”

Red Bull pitted Verstappen onto soft tyres, with Mercedes keeping Hamilton out and believing the race would not restart due to the F1 regulations on Safety Car restarts, and lapped cars.

Drivers were first told that the lapped cars would not be allowed to un-lap themselves, before a lap later Masi ruled that only the cars in between Verstappen and Hamilton could do so. The race was then given the green light for one final lap – much to the surprise of Mercedes – with the FIA claiming F1’s stakeholders were in agreement that they did not want the championship to end behind the Safety Car.

“I think is always hard to please everyone,” says Verstappen. “Because here we did race, then in Monza [in 2022], we didn’t. And then people are also complaining. So, what is right, not racing or racing?

“It is always the one who loses out will complain that it’s wrong, not the one who benefits from it. That’s how it works.

“To just cross the line under the Safety Car always feels like a bit of a shame, really.”

Verstappen on the last lap: The cramp, the overtake, the celebrations

Verstappen then recalls going into that final lap with the most inopportune of issues.

“I’m nervous, there were a lot of nerves,” Verstappen states. “This was the most important lap of my career up until that point… it’s going to be a world championship or not.

“And then the worst thing what happened was I crossed the line [for the final lap], and I got a cramp in my right leg.

“It was the most nervous a lap of your life and then also dealing with a cramp struggling to stay full throttle. I couldn’t control my leg! It was terrible.”

Verstappen, on his fresh tyres, caught Hamilton, and others, by surprise with a bold overtake into Turn Five.

Verstappen, dealing with his spasming right leg, held off Hamilton through those straights and crossed the line as F1’s fourth-youngest world champion.

“It was the biggest emotional outburst of my life,” he says. “People were going crazy, people were crying.”

He will take his first racing lap back at Yas Marina today, from pole position.

Watch all the action live on Sky Sports F1, with build-up at 11.30am before the race start at 1pm.