It took a stoppage-time strike from Harry Kane to beat Tunisia in England’s last World Cup opener. This time, it was sealed before half-time, Iran swatted aside in a manner which hints at a new, more expansive iteration of Gareth Southgate’s national team.

The meeting with Iran, defeated only twice in their previous 21 games, had been billed as a potentially awkward first match for a team out of form in the run-up to the tournament. Instead, they made light work of it. Six goals and a near-perfect start.

This was England unleashed.

The personnel was largely familiar, with only two changes from the side that faced Italy in last year’s Euros final, but those alterations proved transformative, Jude Bellingham and Bukayo Saka adding youthful verve and setting the tone for a vibrant England display. 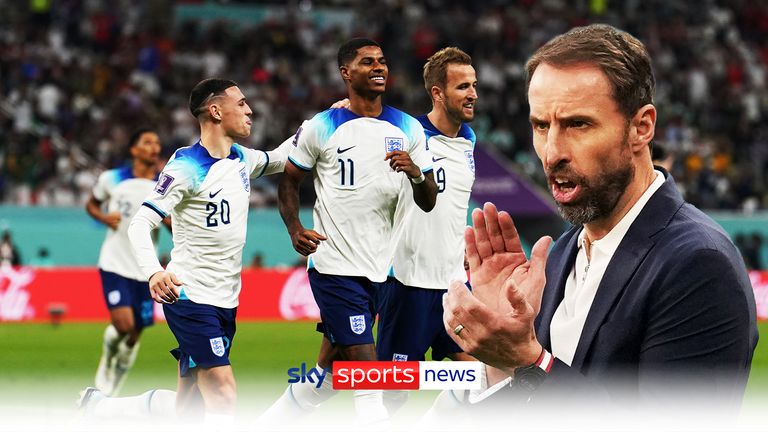 It helped, of course, that there was a change of shape too, Southgate switching from a back five to a back four, a signal of England’s attacking intent before a ball had even been kicked and one which allowed him to incorporate an extra midfielder.

That midfielder was a 14-year-old Birmingham City academy hopeful at the start of the last World Cup but the early evidence suggests Bellingham, now one of the most exciting young players in Europe with Borussia Dortmund, will play a central role at this one.

The 19-year-old was outstanding, scoring his first England goal with a towering header from Luke Shaw’s cross in the 35th minute, and having a hand in just about everything England did.

He was there in the build-up to England’s third, carrying the ball forward, as he did on so many occasions, and picking out Harry Kane to provide the cross for Raheem Sterling’s near-post finish.

Bellingham was there for their sixth, too, his through-ball from Marcus Rashford’s flick sending Callum Wilson scampering clear on the right-hand side to set up Jack Grealish for a close-range finish.

With Declan Rice stationed behind him at the base of midfield, Bellingham’s primary responsibility was to get England playing and that’s precisely what he did. Ninety-two of his 95 passes found a team-mate. No player completed more dribbles.

Bellingham popped up just about everywhere in Iran’s half, combining effectively, at different times, with Saka, Mason Mount, Sterling and Kane, and later England’s substitutes, providing the bridge between midfield and attack that England have often lacked in the past.

The teenager was practically faultless out of possession too, snapping into challenges alongside Rice in midfield, chasing down defenders high up the pitch, and ensuring England’s dominance, save for a couple of second-half lapses, was comprehensive.

Saka, a relative veteran at 21, was similarly impressive, the Arsenal forward justifying his inclusion in emphatic style as he scored twice in an England game for the first time.

His first, smashed in first-time from Harry Maguire’s downward header, showed his technical brilliance. His second, dispatched after cutting inside and delaying his shot from Sterling’s pass, was well-taken too.

Phil Foden may feel unfortunate to have missed out on a starting spot but Saka was the form pick and he tormented Iran from the start, his movement off the right and confidence on the ball unsettling their five-man defence and creating space for his team-mates to exploit.

Alongside that youthful dynamism there were examples of what worked so well for England at the last World Cup.

Southgate’s side scored nine set-piece goals at that tournament, setting a World Cup record, and, with Kieran Trippier still on dead-ball duties, that threat clearly remains.

Saka’s first goal came from a Trippier corner headed down by Maguire while the Manchester United centre-back also struck the crossbar from another Trippier centre before that.

It was in open play, though, that England caused Iran the most problems and that shift in emphasis bodes well for a side seeking to build on the progress of the last two major tournaments in Qatar.

Southgate has long talked up the importance of defensive solidity above all else in international football but fans were craving a little more ambition and England, finally, provided it.

Of course, Iran did not offer much in the way of resistance. England will face far sterner tests than this. But the margin of victory owed more to England’s performance than that of their opponents. “Scoring six is really impressive regardless of who you play against,” as Bellingham put it afterwards. Iran had only conceded six goals in their previous 10 game combined.

Southgate was keen to keep feet on the ground afterwards, rueing the dip in concentration that allowed Iran to pull two goals back in the second half.

But this was a day of vindication for him. In Bellingham and Saka, he was rewarded for trusting youth. Maguire, meanwhile, who provided an assist and performed assuredly before his enforced withdrawal, rewarded his faith too.

The decision to change formation underpinned it all and there were more positives for Southgate in the way his substitutes contributed, with Rashford and Grealish among the scorers and Wilson setting one up.

It all adds up to an England side which looks and feels different. The bigger challenges are of course still to come. But, thanks in part to Bellingham, Saka and Southgate’s boldness, England have started this World Cup in the best way possible, and perhaps even with a template to follow for what lies ahead.