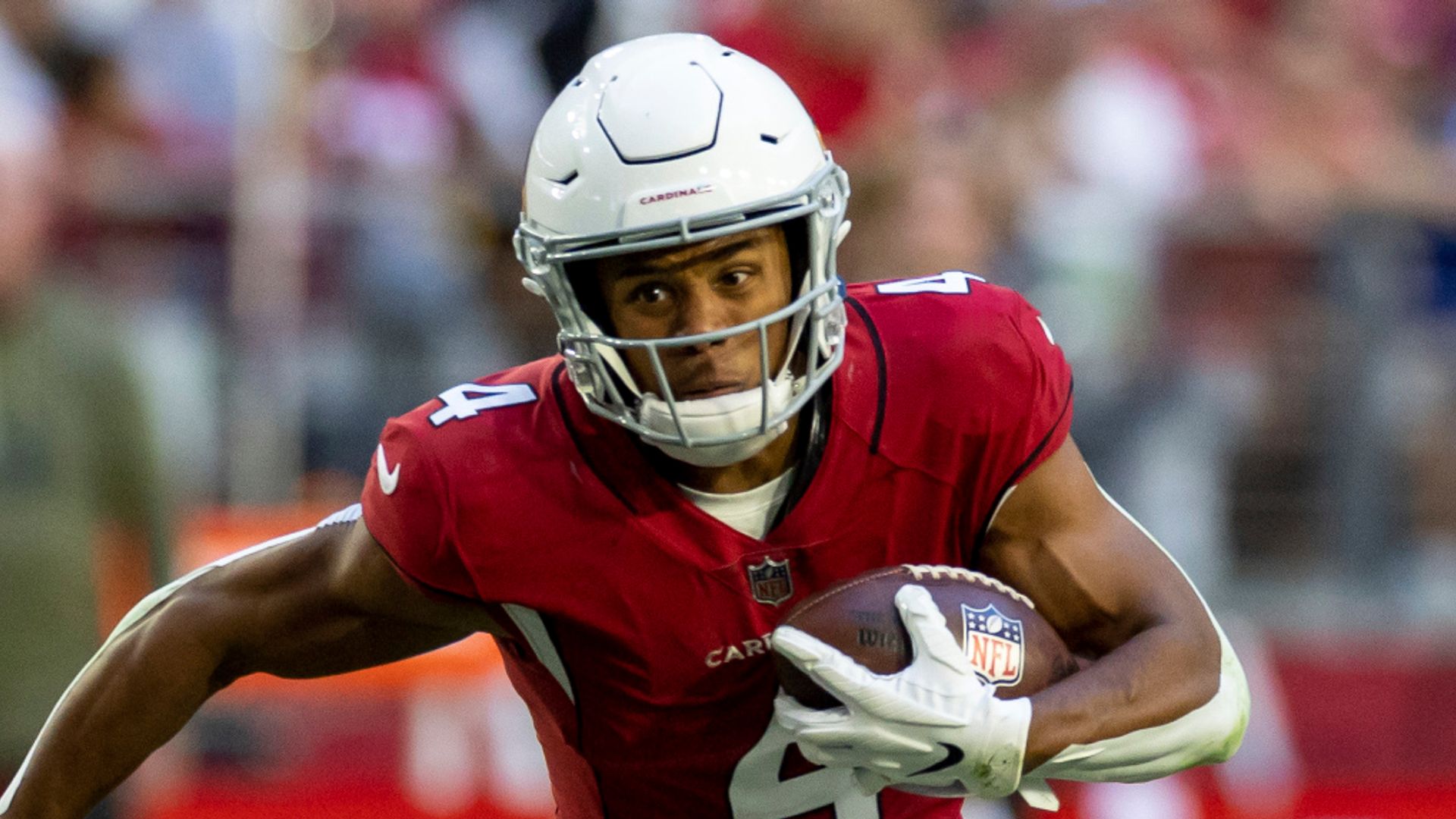 Will Rondale Moore ignite the Arizona Cardinals offense? Kliff Kingsbury may finally be realising how to get the best from the second-year receiver; watch the Cardinals take on the San Francisco 49ers live in Monday Night Football in Mexico from 1.15am in the early hours of Tuesday

The Arizona Cardinals may have reminded themselves recently of the gem they have in Rondale Moore – more expansive deployment of whom is threatening to unlock the best of the second-year wide receiver.

Such can be the way of today’s NFL that the smaller, speedier, yards-after-catch-savvy receivers coming out of college are shoehorned into the trendy ‘gadget’ mould, the on-field definition of which is something along the lines of ‘look at what we can do with a non-running back in the backfield’.

‘Gadget’ serves to applaud the versatility of elusive ball-carrying receivers who fog the defense’s read of a play-call with pre-snap motion behind the line of scrimmage and disguised hand-offs and just about anything contrary to your conventional downfield route. It too can be a disservice to a receiver’s traditional pass-catching, route-running traits while casting a shadow of uncertainty over their role.

Moore naturally assumed said narrative as he came out of Purdue with a reputation as a run-after-catch demon tailored to a time of deep-shell coverages that would vacate space in which to operate underneath, and at a time when offensive coordinators were competing to see who could use their receivers in the most innovative, funky way.

The tape spoke to a weapon that was electric with the ball in his hands, with a robust frame and low centre of gravity that allowed him to break tackles and homerun separation speed combined with devastating change in direction to tee up double-move routes and open-field jukes.

In the Week 10 win against the Los Angeles Rams Moore lined up as the ‘X’ receiver isolated on the left of a 3×1 formation on fourth-and-two, running a fade from his outside release before swiveling his hips at the top of his route and hauling in a one-handed catch in tight coverage from David Long. It was snag of the week were it not for Justin Jefferson and his absurd grab against the Buffalo Bills.

It was also the newest installment of a potential Cardinals epiphany: maybe now is the time Kliff Kingsbury begins to use his road runner downfield more. If not downfield, then at least stretch the boundaries of an approach that has restricted Moore primarily to catch-and-run designs behind the line of scrimmage. To put a number to it, Moore caught 38 passes behind the line of scrimmage during the 2021 season, marking the second-most in the league with the other four players in the top five being a running back (PFF).

Moore is quietly stringing together the most productive and perhaps telling run of his NFL career as the Cardinals show signs of using him more creatively. He logged nine catches for 94 yards at 10.4 yards per reception from a career-high 13 targets against the Rams, following up eight catches for 69 yards from 10 targets against the Seattle Seahawks and seven catches for 92 yards and a touchdown against the Minnesota Vikings. After seven games this season, Moore having missed the opening three weeks through injury, he needs just 22 yards and nine more targets to surpass his tallies as a rookie (435 yards from 64 targets in 14 games).

His 7.1 yards after catch per reception also ranks eighth in the league, while he is averaging 3.8 yards of separation and a third-best 7.5 yards of average cushion (the Next Gen Stats metric for distance measured between a receiver/tight end and the defender they are lined up against at the time of snap).

“It’s what we’ve seen all along,” said Kingsbury this week. “He’s dynamic. We have to find ways to get him the ball in space and his ability to do that on each and every play. It was good to see and I’m glad he got to have some positive plays. The rapport with the quarterback is obviously growing.”

The last three weeks have shed light on variation to Moore’s route tree beyond the end-arounds, the screens, the jet-sweep handoffs as Kingsbury tips his cap to the ‘set Rondale free’ fan club. On one play against the Seahawks he evaded young corner Coby Bryant by faking a vertical before darting inside and making a catch on the move, on another he curved a switch-route into an out for another sideline grab, on another he ran a stick route out the slot in a 3×1 formation and produced a sharp stutter to come back on the ball before spinning for extra yardage.

Against the Rams he mirrored the same curved out route that has defensive backs braced for retreat at the threat of his speed on a fade, demonstrated concentration and timing to make a catch between two defenders at mid-field on a dig route, and set up his fourth-down conversion by turning third-and-17 into a gain of 14 yards on his hitch-and-burst that saw him shrug off a tackle. Even the mere comebacks and curls on short-to-intermediate routes are giving him a greater opportunity to succeed.

Moore, while of a slighter build, often features among the candidates projected to reproduce wrinkles of the ‘wide-back’ role that saw Kyle Shanahan and the San Francisco 49ers unleash star receiver Deebo Samuel as their most effective running back over the second half of last season. 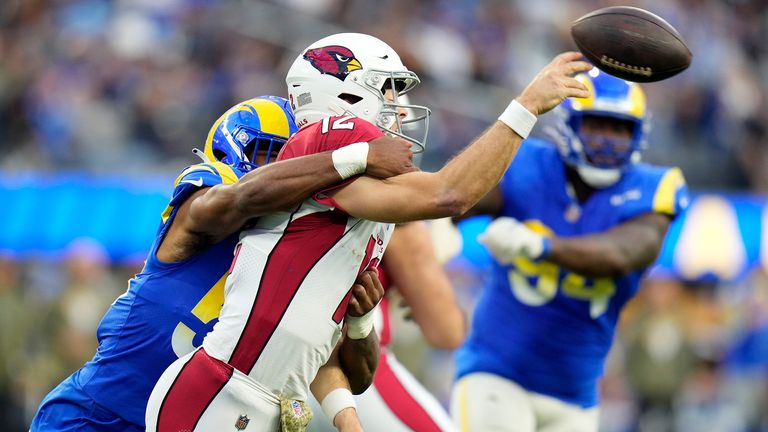 Samuel managed 1,770 total scrimmage yards from 970 offensive snaps including 116 in the backfield, 239 in the slot and 591 on the outside (PFF) – multi-faceted offense at its finest, and no team could stop it. Kingsbury dabbled in a similar usage as he lined up Moore in the backfield for 37 snaps, only the balance in experimentation was too little.

So signs of the Cardinals’ offense adapting, as it has needed to and as it failed to do after its strong start last season, are there.

Moore’s spot of form comes at a time when the team has just lost Zach Ertz to a season-ending knee injury while the tight end had been accounting for an 18 per cent target share and been on course for over 90 catches, with Marquise ‘Hollywood’ Brown still recovering from a foot injury and with Arizona’s offense ranked 29th in DVOA and 23rd in EPA/play.

Ramping up the imagination to their use of Moore is a step forward to enhancing this offense, particularly against a San Francisco 49ers defense that has run into trouble against slot receivers over the last three weeks.