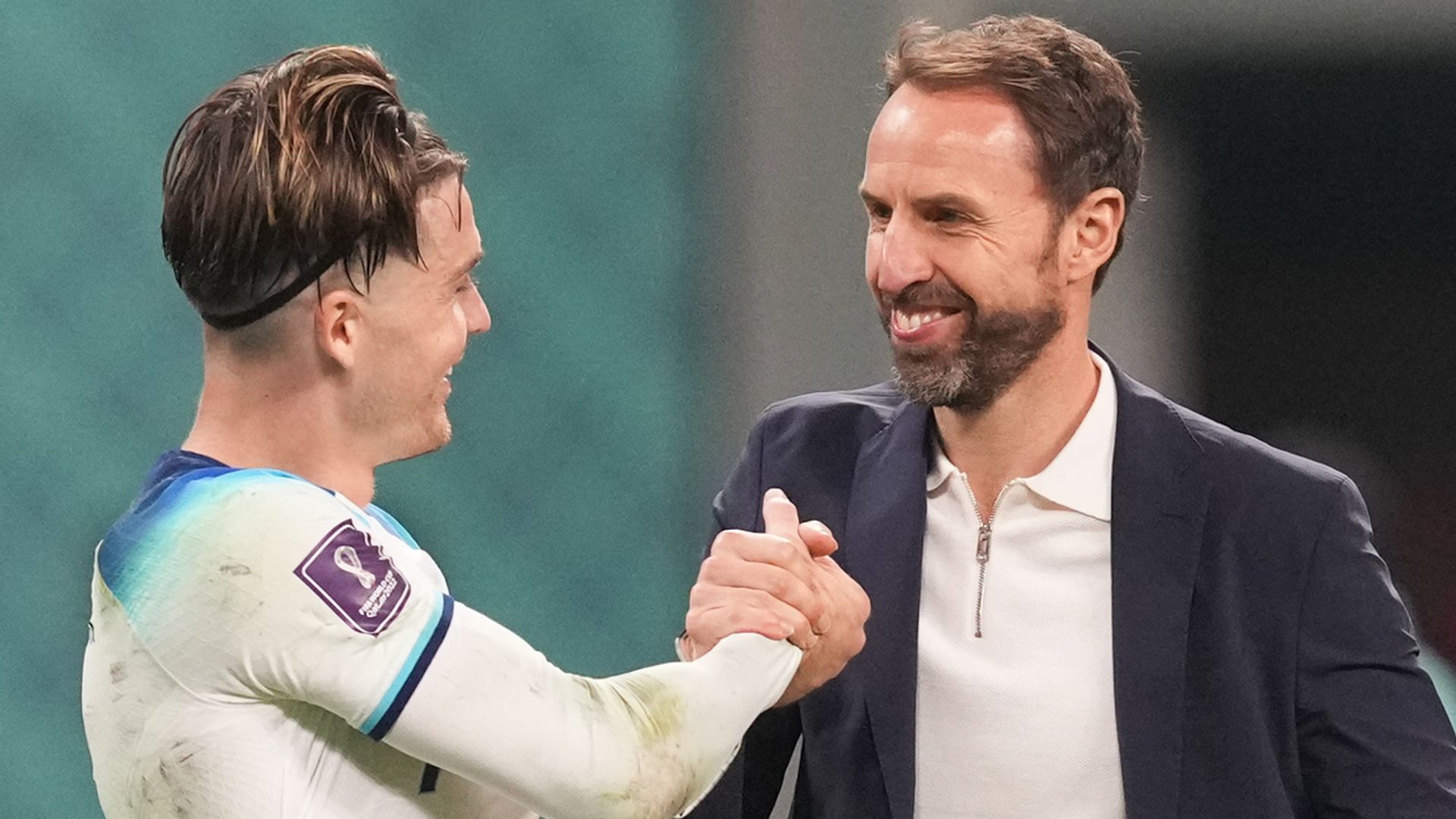 Gareth Southgate has won the most matches at major tournaments of any England manager – and he keeps getting the big calls right.

Only Sir Alf Ramsey remains ahead of the current Three Lions boss by virtue of delivering the World Cup in 1966, yet Southgate is continuing to head in the right direction to surpass him.

Southgate has always been brave with his team selections. In 2018, he deployed an unfamiliar three-man defence. At Euro 2020, in the pressure-cooker of England’s first game at a home tournament against an experienced Croatia side, he named Kieran Trippier at left-back and handed Kalvin Phillips his tournament debut in midfield. He would later start Bukayo Saka in the semi-final.

Southgate is never swayed by public opinion, although he did set England up in the popular 4-3-3 system to face Iran. The big call was starting Harry Maguire at left centre-back after his bit-part role at the start of Manchester United’s season.

Maguire imposed himself on Iran, hitting the crossbar with a header before setting up Saka’s first goal. There is a feeling now that England would miss having him in the defence against USA should he not be able to recover from injury.

Southgate could have easily opted for Phil Foden or Marcus Rashford over Saka on the right wing, yet the Arsenal youngster delivered a two-goal performance.

Southgate also gave a first tournament start to 19-year-old Jude Bellingham, who scored a superb header and was outstanding in midfield.

There remains question marks over Southgate’s in-game management after losing leads in the 2018 World Cup semi-final and the Euros final although undoubtably the level-headed England boss knows how to approach tournament football.
David Richardson

Bellingham announces himself on the international stage

On his World Cup debut, Bellingham lit up the Khalifa International Stadium. It is increasingly difficult to believe he is only 19-years-old.

The midfielder only made appearances off the bench at last summer’s European Championships. However, 16 months is a long time in football. This season Bellingham has scored four goals in five Champions League games, with three Bundesliga goals.

He had wanted to score more for his club, but he can now add a first England and World Cup goal to his tally.

It did take some time for Bellingham to settle into the game, arguably reflective of England’s start as a whole. He gave away a sloppy foul for Iran’s first free-kick of the game, but once he found the net in the 35th minute, he was practically unstoppable.

Luke Shaw provided a brilliant cross that Bellingham looped home, inexplicably unmarked inside the area. It was some way to score your first World Cup goal, becoming England’s second-youngest goalscorer in World Cup history after Michael Owen in 1998.

While he may not have picked up an official assist for the other five goals, his physicality, vision and anticipation set England on their way. For the third, he stayed alert in midfield to pick up a loose ball after a foul on Saka before playing in Harry Kane.

It was also a truly world-class, floated pass that picked out Callum Wilson down the right wing for Jack Grealish’s late sixth. He played a similar ball early on too for Trippier in arguably a warning sign to Iran as to what they could expect.

You could write a novel on the number of delicious moments Bellingham produced against Iran. Those who have watched Borussia Dortmund games this season will not be shocked either – he does this week in, week out in Germany.

Alongside Jordan Pickford and Kane, Bellingham should now be an unequivocal inclusion in Southgate’s starting XI. He shows maturity and wisdom beyond his years, on and off the pitch.

He looks nailed on as a future England captain, and could still be playing for his country in 15 years’ time, all being well. It is a truly exciting prospect, but for now, let’s enjoy the young talent of Bellingham and his performances at this World Cup.
Charlotte Marsh

Harry Maguire was replaced after 70 minutes having complained of blurred vision but the much-maligned Manchester United centre-back had made his point at the Khalifa International Stadium.

Maguire was the subject of thorough concussion checks after appearing dazed in the aftermath to Mehdi Taremi’s first goal. Whatever the reasons, it certainly looked to have had an impact on the player’s judgment as the Porto striker peeled off him to rattle past Jordan Pickford.

But by then, Maguire had more than vindicated Southgate’s decision to stick by him. It was the biggest call of Southgate’s 77th team selection as manager, but Maguire’s performance meant he was 100 per cent justified to stick by a defender who has rarely let him down.

Here in Doha, Maguire looked like he lion who roared in Russia, bowling out from defence and squeezing Taremi’s every touch. He might have capped his performance with England’s first goal, a trademark header thudding back off the bar.

But he was alert to pick out Bukayo Saka for his first and the player’s forlorn figure as he was forced off means Southgate will be desperate for positive news on his go-to man ahead of facing USA on Friday.
Ben Grounds

Saka’s last touch for England at a major tournament led to the worst moment of his professional career – but he showed against Iran that he has carried no baggage into the World Cup.

The Arsenal winger, one of Southgate’s favourites, justified his selection over the likes of Foden, Rashford and Grealish with a two-goal performance.

Saka’s left foot, cutting in from the right, brings balance to the England attack while he can also be trusted to help his full-back. That was all evident in his fine display at the Khalifa International Stadium with his first goal, a sumptuous volley which clipped the underside of the crossbar, sparking England’s tournament well and truly into life.

He showed his composure in the second half to cut into the box and find the bottom corner while constantly giving the Iran defence something to worry about.

Saka, still only 21, now has the experience and confidence to become one of England’s main men in Qatar.
David Richardson

Iran fans make their point but Queiroz loses his head

It was a day to forget for Iran in pretty much every sense. There was a strong message sent before a ball was kicked.

The team chose not to sing their country’s anthem before their World Cup match on Monday, in an apparent show of solidarity with anti-government protesters amid discontent over their reluctance to speak out.

The players were solemn and silent as the anthem was played before the match with England at the Khalifa International Stadium, where thousands of Iranian fans in the stands shouted as the music rang out.

Some jeered and others were seen making thumbs-down gestures. More than two months of protests in Iran, sparked by the death of a young woman in the custody of the morality police, are one of the boldest challenges to Iran’s clerical leaders since the 1979 Islamic Revolution.

But on the field, there was further controversy as Carlos Queiroz and his medical team initially allowed goalkeeper Alireza Beiranvand to play on despite a sickening clash of heads with team-mate Majid Hosseini.

After a 10-minute wait, Beiranvand played on before collapsing again. He would leave the field on a stretcher. The medical team have a responsibility to deal with concussion protocols seriously, and the images were clear. Beiranvand was in no fit state to continue and should never have been allowed to take the goal-kick after play resumed.

Queiroz incited Iran supporters during the second period as he turned to them and called for more noise but he ought to have taken responsbility for this gross oversight, instead preferring to focus on those who booed the team as England’s goals kept flying in.

“In 2014 and 2018, we had full support from the fans,” he said. “Now you saw what happened today. If Iran fans want to come here and not support the team, they should stay home. We don’t need them. To have fans that are only supporting the team when they are winning, we don’t need them.”

Queiroz should focus on his own conduct.
Ben Grounds