Saudi Arabia produced one of the greatest upsets in World Cup history as Salem Al-Dawsari’s stunning solo effort secured a 2-1 victory over Argentina in Group C at the Lusail Iconic Stadium.

Time stood still as Al-Dawsari plucked the ball out from the sky and turned inside two Argentina defenders before curling his finish beyond the reach of Aston Villa goalkeeper Emiliano Martinez, producing one of the biggest moments of any World Cup finals.

Lionel Messi had given one of the pre-tournament favourites the lead from the penalty spot after a contentious VAR decision (10) but Saleh Al-Shehri levelled just three minutes into the second period to set up an almighty upset.

The result ended Argentina’s 36-game unbeaten run, stretching back to defeat against Brazil three years ago but this was the greatest day in Saudi Arabian football history.

“This hurts a lot. We were dreaming of starting the World Cup with a win,” said Messi’s strike partner Lautaro Martinez. “But it’s happened and now we have to train and think forward.

“We lost this game because of our own mistakes, most of all in the second half. There are details that make a difference and we need to correct our mistakes.”

When Argentina last lost their opening World Cup group game in 1990 – against Cameroon – they went on to reach the final where they lost to Germany, but that will be of little consolation to the South Americans right now following defeat to the nation ranked 51st in world football.

Player of the match: Salem Al-Dawsari.

Midfielder Abdulelah Al-Malki said the Saudis were fired up like never before by their coach Herve Renard.

“Renard made us cry with the motivation before the match and stoked us up during halftime,” he said, affectionately calling the Frenchman “crazy”.

The entire game was played in an extraordinary atmosphere at the Lusail Stadium, with Argentina’s traditionally massive and raucous following matched by the thousands of Saudis who had come over the border to cheer on their team.

Referee Slavko Vincic awarded Argentina a penalty upon VAR review inside 10 minutes after Leandro Paredes had his shirt pulled by Saud Abdulhamid inside the box.

Three times Argentina were then denied by the offside flag in the first half with Messi thwarted on one occasion before Lautaro Martinez twice found the net only to be ruled out by VAR.

The game turned on its head within three minutes of the restart, however, with Al-Shehri capitalising on hesitancy from Cristian Romero to find the bottom corner.

If the Saudis inside the stadium looked on speechless with the rest of the world, but they had barely regained their breath when Al-Dawsari brought the ball down inside the Argentina box, danced inside Nahuel Molina and Angel Di Maria and curled a right-foot shot high into the far corner to seal a triumph against all the odds.

“Our team fulfils our dreams!” and “Where is Messi? We beat him!”, the green-clad Saudis chanted over and over in the Lusail Stadium, on their feet and greeting every clearance from their defence with a deafening roar.

Both teams have Mexico and Poland to come, with Argentina needing an immediate reaction if Messi is to have a realistic chance of matching Diego Maradona’s immortality in his homeland by bringing home the World Cup.

The result broke Argentina’s amazing 36-match undefeated run and stopped them from matching the previous international record of 37 games unbeaten held by Italy. 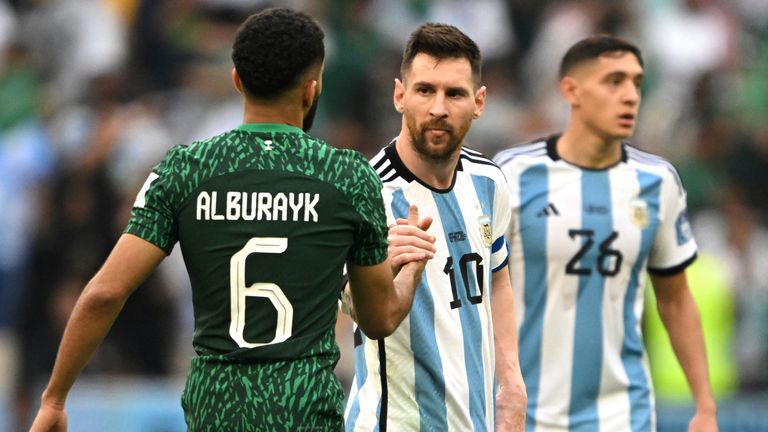 Kaveh Solhekol says Saudi Arabia’s win against Argentina has to be considered as one of the biggest upsets in World Cup history.

Should Argentina have been awarded a penalty?

“He’s not looking at the ball, the directive from the referees is that’s a penalty.”

Sky Sports’ Roy Keane on ITV: “No, no, no, all this will do is encourage diving. He (Otamendi) is dragging him (Abdulhamid) down.”

Souness: “Roy, you’re not listening. It’s a directive from the referees. This is not about opinions, this is about fact, the guy wasn’t looking at the ball.

Souness: “This is not about our opinions, this is about the laws of the game.”

Souness: “I’ve heard you say it 10 times, let someone else speak. You’ll learn a lot more if you listen. He’s not looking at the ball, the directive from the referees is that’s a penalty. We have to accept it.”

“Lionel Messi looked shell-shocked at the final whistle. This may not yet be a defining defeat for Argentina’s World Cup hopes but it was a humbling story to send shockwaves around the world.

“The little magician didn’t know where to turn. Surrounded at one point in stoppage time deep in Saudi Arabia’s penalty box, Messi ran out of ideas.

“One free-kick had already sailed harmlessly over the bar. Quite where the second half came from is anyone’s guess. Argentina looked in total control and appeared unaffected by the three disallowed goals during a one-sided opening period.

“No matter, we will score again soon – that was the misplaced sentiment. But the chances dried up. The emboldened Yasser Al-Shahrani alongside the imperious Hassan Al-Tambakti formed a wall as tall as the Jabal Sawda. On one occasion, Al-Tambakti celebrated a sliding tackle on Messi as though he had won the World Cup.

“This was their final, but no nation in Group C will now fancy facing them in the coming days. After just a second World Cup win in 28 years, head coach Renard will be confident of masterminding more success against Poland and Mexico.

“Defensively, this was as close to perfection as you’re likely to see as Lionel Scaloni threw on Manchester City’s Julian Alvarez. It was some forward line by the end – garnishing players from Paris Saint-Germain, Juventus and Inter Milan – but the nation ranked outside of the world’s top 50 would not be beaten.

“Al-Shahrani was forced off with a sickening head injury in stoppage time but his heroics had epitomised these fearless Falcons as a collective. The group has well and truly been ripped wide open.”

Analysis: Argentina a shadow of themselves

“Argentina never matched them. Historically you’d know they’d not be intimated. They were intimated today. The referee was allowing it to go. Join in the party, join in the physical encounter.

“They got rolled over by a very enthusiastic, aggressive, organised Saudi team, I am so disappointed in Argentina in the manner they lost the game. “That was a shadow of any Argentina team I’ve seen. They were a shadow today.”

“Amazing. One of those when they’re hanging in there, on the ropes. They get a goal back and go on to win the game. But it’s a great reminder to anyone in the game of football, if you think can just turn up and depend on your quality to get you over the line then you’re mistaken.

“Argentina, really dreadful in the second half. Saudi Arabia, all credit to them. They stayed in the game, they competed. [For the second goal] there’s no aggression. There’s bodies there, you’ve got to go and attack the ball. They’ve lacked all composure. Look at Di Maria, my god.

“You’d think Argentina would grow into it. ‘If they want a street fight we’re ready for it’. They weren’t even up for that. They were just depending on their quality and even that wasn’t at it. This desire and fight wasn’t there.

“A huge setback for them. Huge.”

Argentina came with the intention of winning this tournament and so beating Saudi Arabia always looked like a box that just needed to be ticked.

The two-time World Cup champions next face Mexico on Saturday, kick-off 7pm, where victory is vital if they are to have any chances now of progressing. Argentina need at least a point to avoid throwing their hopes of progression into serious jeopardy.

Saudi Arabia are back in action against Poland earlier that day, kick-off 10am, and a win would all-but seal their progression to the knock-out stages, and most likely as group winners.

Al Dawsari became only the third Saudi Arabian player to score more than once at the World Cup (two goals) along with Sami Al Jaber (3) and Fuad Amin (2).