Germany, Spain, Belgium and 2018 finalists Croatia get their campaigns under way on day four of the 2022 World Cup in Qatar.

Belgium‘s “Golden Generation” will begin their final shot at World Cup glory against Canada on Wednesday, but do so without talismanic forward Romelu Lukaku, who has been central to their success in recent years.

The Group F game at the Ahmad bin Ali Stadium in Al Rayyan is a tricky opener for Roberto Martinez’s side against opponents appearing at a first global finals for 36 years who will be fired up to spring a surprise.

Herdman: I get out of bed to upset teams

Canada arrive in Qatar as the designated underdog – a role coach John Herdman knows all too well having played the part his entire career.

At the 1986 World Cup Canada failed to score a single goal and there are some betting that the 500/1 longshots, who are grouped with the second ranked Belgium, 2018 finalists Croatia and Morocco, might not find the back of the net again in Qatar.

But then few would have bet on the boy from the hard streets of Consett in England’s industrial north east finding his way onto football’s most glamorous stage.

Herdman has plenty of respect for the challenge ahead but is itching for the fight.

“I think for the first time in a long time I have come to the place where I wanted to be as a coach and I know my players this is the moment they want to be in as well,” said Herdman.

“They feel we can genuinely get in and have a right fight with these teams and be that team that overachieved and find our X-factor.

“To upset some teams, I get out of bed for that.”

Germany‘s teenage sensation Jamal Musiala has credited his England youth period for helping him develop his creative game that has quickly turned him into one of the rising stars of the sport.

The 19-year-old, following a stellar season start with Bayern Munich where he scored nine goals and delivered six assists so far, is expected to be Germany’s conductor in attack, operating between central midfield and the front line.

“I think a comparison with Messi is something like an honour,” Musiala told a news conference. “He plays at a top level for so long and to be compared with him is a bit difficult. I just focus on me and what I can do better as Jamal and keep going.”

Musiala will have a chance to show it on the biggest stage when the Germans kick off their Group E campaign against Japan.

They also play Spain and Costa Rica and are eager to make amends for their 2018 shock first-round exit.

“We have the quality to go far in this tournament,” Musiala said. “We all go in with the mindset that we can win the title. We are well prepared and raring to go.”

Croatia have won their last five matches and lost once in 16 months, but the 2018 runners-up, led by midfield conjuror Luka Modric, will begin their World Cup campaign against Morocco with little fanfare and few predicting glory.

So unfancied are Zlatko Dalic’s side, who went all the way before succumbing to France in the final four years ago, that bookmakers are offering 50-1 against them lifting the trophy this time around.

That is longer odds than Denmark and in the same ball park as Serbia, which is probably how they like it.

“It is going to be hard. But also it is good that we maybe don’t have so much pressure because we did amazing things in Russia. But we still wish and we still want to achieve more,” forward Andrej Kramaric said.

Germany winger Leroy Sane has suffered a knee injury and will miss their World Cup Group E opener against Japan.

The 26-year-old did not take part in their final training session in northern Qatar ahead of Wednesday’s game in Doha and it was unclear how long he would be sidelined.

Four-times champions Germany, who suffered a shock first-round exit at the 2018 World Cup, also had striker Niclas Fullkrug out for a few days with the flu but he has since returned to training.

Lukaku, who is set to miss Belgium‘s first two games at least, is not the only player potentially out of the game against Canada. Right-back Thomas Meunier trained on his own on Sunday having seemingly recovered from a broken cheekbone last week.

Jan Vertonghen appears to have overcome injury and got 20 minutes against Egypt. A big question for Martinez is how to use in-form forward Lois Openda, who made his international debut in June and has been an impressive addition to the squad and an alternative to Michy Batshuayi.

With Maxime Crepeau already ruled out with a broken leg suffered in the MLS Cup final, Canada was facing a crisis in goal if Borjan, who has been bothered by an abdomen niggle, was unable to play leaving Herdman to choose from inexperienced backups in Dayne St. Clair and the uncapped James Pantemis.

For Croatia, Luka Modric, the player of the tournament in 2018, has one last shot at glory at the age of 37, and will line up against Morocco probably part of an impressive midfield trio alongside Inter Milan’s Marcelo Brozovic and Mateo Kovacic of Chelsea.

Brozovic has shaken off a muscle tear and played 70 minutes against the Saudis, allaying fears about his involvement at the tournament. 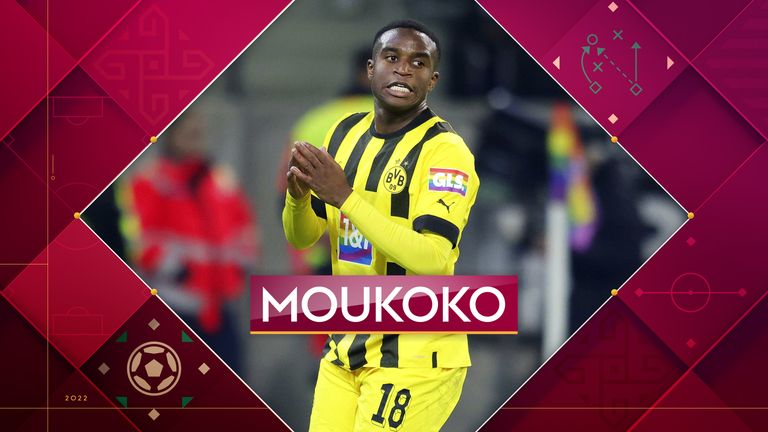 Sky Sports’ Peter Smith and Nick Wright analyse some of their favourite stars to keep an eye out for during the World Cup 2022 in Qatar. Their one to watch for day four is German teenage sensation Youssoufa Moukoko.

Elsewhere at the World Cup – A battle of the generations

The young Spain players at the heart of coach Luis Enrique’s new-look side make their global debut when they face the experienced veterans of Costa Rica in their Qatar World Cup opening match.

With captain Sergio Busquets the lone survivor of the Spain team that won the 2010 tournament in South Africa under then coach Vicente del Bosque, Luis Enrique has blooded a new generation of players in preparation for Qatar.

Three years into the restructuring of the national side after dismal showings in Brazil in 2014 and Russia in 2018, there are signs that the former Barcelona and Real Madrid star is building something that will be a force for years to come.

Barcelona midfielders Pedri, 19, Gavi, 18, plus their Catalan club team-mate Ferran Torres, 22, are three of the young faces in the fresh-faced Spain side.

Luis Enrique – who led the Reds to the semi-finals of the Euros last year where they were eliminated by Italy on penalties – has picked 14 players aged 25 or under, and the average age of the squad is the third youngest among the 32 teams in Qatar.

For Costa Rica, playing in their sixth World Cup, the picture is almost the complete opposite.

Six of their squad members were part of the 2014 campaign, when Costa Rica qualified from a ‘Group of Death’ at the expense of Italy and England, and they are all now aged 30 or over, including striker Bryan Ruiz who is 37.

Colombian coach Luis Fernando Suarez’s team are known for their solidity – they conceded only eight goals in qualifying – and for their ability to counter-attack, potentially posing a threat to Spain’s 33-year-old defender Cesar Azpilicueta if he starts.

But the age of some of Costa Rica’s core players will pose challenges beyond the physical demands of the game. Goalkeeper Keylor Navas has not played a competitive game for his club Paris St Germain in five months after losing his place to Italy’s Gianluigi Donnarumma.

Listen to episode two of the Essential Football World Cup podcast as we discuss who will start in England’s opening game against Iran and Gareth Bale’s fitness for Wales.