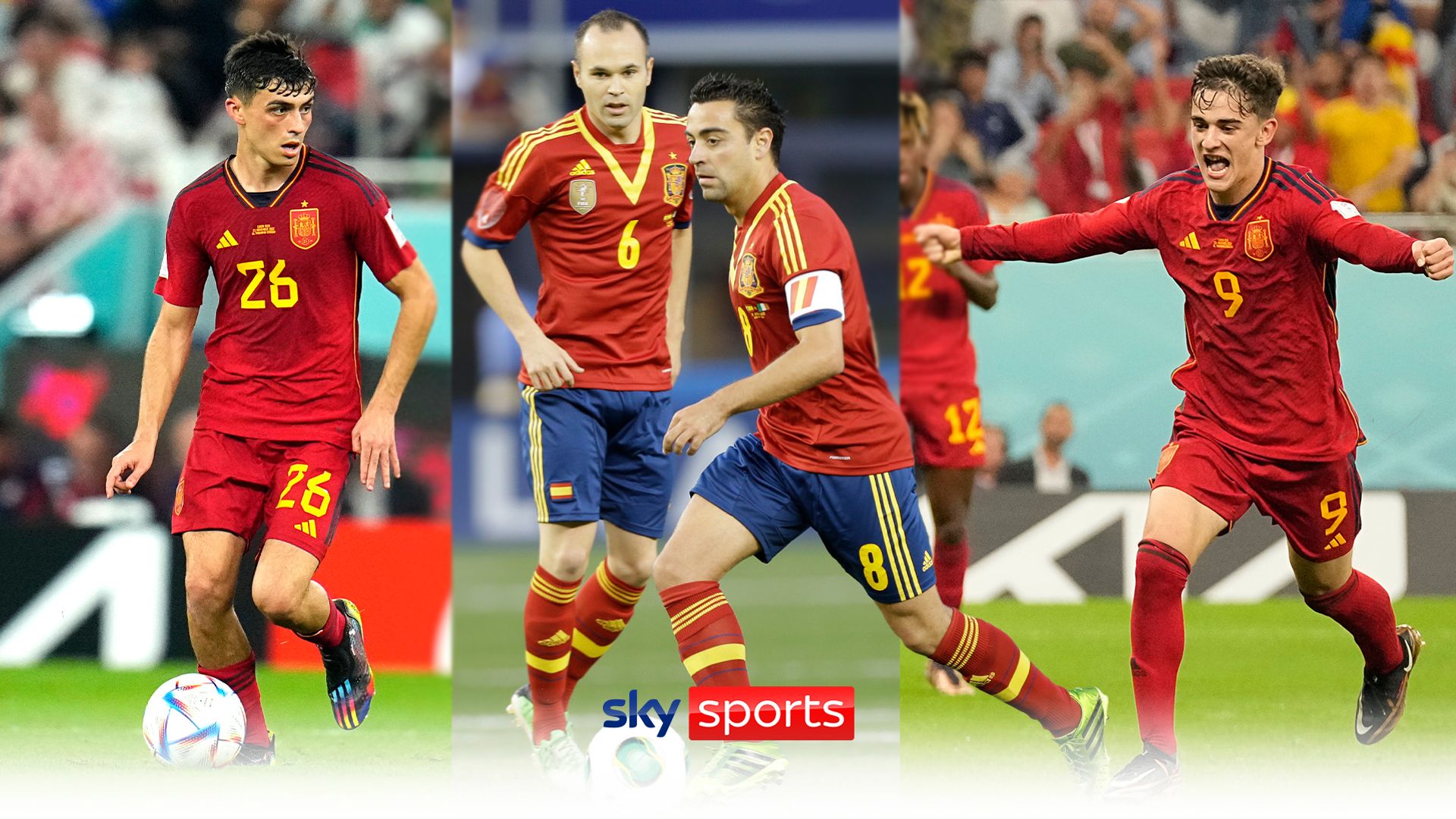 “Our only goal is to control the game continuously,” said Luis Enrique when it was all over. Spain did that, thrashing Costa Rica 7-0, thanks in part to the influence of their two teen sensations.

Pedri and Gavi were simply outstanding in Spain’s opener, pulling their stricken opponents apart seemingly at will. Helped by the presence of their Barcelona team-mate Sergio Busquets, they completed 152 of 162 passes between them.

That’s not all they did either.

Pedri created a succession of scoring chances before his withdrawal, while Gavi, Spain’s youngest player to feature in a World Cup at 18 years and 110 days, became the youngest scorer in the competition since Pele in 1958, his stunning strike for the fifth goal capping a quite brilliant individual performance.

As Spain seek to recapture their former glories, it is impossible to watch Pedri and Gavi and not be reminded of Xavi Hernandez and Andres Iniesta, Barcelona team-mates of a previous generation, who, together with Busquets, helped turn La Roja into World Cup and European Championship winners a decade ago.

There is a long way to go if they are to match those feats, of course. The real tests are still to come for Enrique’s side at this tournament. But what Pedri and Gavi are doing is already extraordinary. At Gavi’s age, neither Xavi nor Iniesta had made a senior appearance for Barcelona, let alone Spain.

The future could hardly be brighter.
Nick Wright

Belgium are not a team to be feared

Roberto Martinez put on a brave face. Having dodged an opening-night shock at the hands of Canada he had every right to focus on the positives, but scratch beneath the surface of the result and alarm bells will almost certainly be ringing.

This World Cup was billed as the last chance for Belgium’s golden generation to do it on the big stage, but their underwhelming, disjointed debut in Qatar raised the suggestion that chance may have already passed.

It may seem premature to reach such a conclusion one game into a tournament for a nation who have the likes of Kevin De Bruyne, Eden Hazard and Thibaut Courtois in their ranks, but concerns over Belgium’s credentials are myriad.

Michy Batshuayi was the match-winner but the sight of the former Chelsea and Crystal Palace striker leading the line shone a light on their overdependence on injury-prone Romelu Lukaku. At the back, Jan Vertonghen and Toby Alderweireld, two defenders revered in their prime, were constantly tormented by the Canadian attack.

Had Canada possessed a striker with the same quality as Alphonso Davies then Belgium would have suffered the same fate as Argentina and Germany. They got away with one on this occasion, but there was nothing to suggest the same would happen against better opposition.
Jack Wilkinson

Croatia are perennially slow starters, having lost their opening game in three of their five World Cup appearances, with the exceptions being 1998 and 2018, when they reached the final.

But against Morocco on Wednesday, it felt as if their emphasis was placed on playing not to lose.

Zlatko Dalic’s side are 12th in the FIFA rankings, 10 places above Morocco, but they cancelled each other out in this opening Group F contest. The Atlas Lions have only lost twice since the beginning of 2021 – once on penalties to Egypt in the Africa Cup of Nations – and it is clear to see why they are so hard to beat on this evidence.

Croatia’s World Cup qualification was smooth and they topped their Nations League group ahead of France, but having failed to score past Morocco, the bookmakers will feel vindicated in having them as outsiders in Qatar.

Luka Modric, the 2018 Ballon d’Or winner, said before kick-off it was important to respect Morocco, describing their players as phenomenal and highly motivated – yet he struggled to impose himself in a Croatia side that appears to be regressing.

Their best moments predictably hinged on Modric, who was given the freedom of the park, floating effortlessly from back to front, with football’s traditional midfield roles seeming not to apply to Croatia’s captain. He dropped deeper and deeper to get onto the ball but Croatia lacked spark.

At 37, Modric remains a maestro in the Real Madrid midfield. He pledged he would bow out of the game if Croatia win the World Cup, but there was little indication from this stalemate to suggest that eventuality is likely.
Ben Grounds

How Japan’s victory was cultivated in Germany’s backyard

It can be said that Germany – or the domestic leagues at least – had a hand in their own shock 2-1 World Cup defeat to Japan.

Ritsu Doan, who plays for Freiburg, pounced on a rebound to equalise before Bochum’s Takuma Asano sprinted clear of Nico Schlotterbeck and beat Manuel Neuer from a narrow angle.

Japan coach Hajime Moriyasu had five Germany-based players in his starting line-up and three, including the scorers, on the bench. He credited the Bundesliga and Bundesliga II for helping improve his footballers.

“I believe it’s a historic moment, a historic victory. If I think about the development of Japanese soccer, thinking of players, for them this was a big surprise,” he said.

“They’re fighting in a very strong, tough, prestigious league. They’ve been building up their strength. In that context we believe that those divisions have been contributing to the development of Japanese players. I’m very grateful for that.”

While knowledge of how to play with and against certain players works both ways, Japan certainly used whatever inside information they might have had to devastating effect. They had never beaten Germany before this meeting.

The stats point to Germany’s dominance – 70 per cent possession, 25 shots compared to Japan’s seven, almost four times as many passes as their opponents. However, the four-time tournament winners were unable to capitalise and were punished by a Japan side cultivated in their own backyard.

They consistently posed a threat on the counter-attack with their pace and ambition. While his foul for the penalty was clumsy, Japan’s ‘keeper Shuichi Gonda was key to their victory. His quality and desire epitomised this Japanese victory.

The victory is further evidence that the non-European and South American sides deserve to be in the World Cup just as much as the teams being painted as favourites. ‘Flat’ seems to be the word of the week in Qatar to describe the performance of some of the teams expected to go far.

Japan beating the nation that helped them develop their football structure is proof the apprentices are here, but the masters need to wake up.
Charlotte Marsh and Adam Williams

Musiala – A superstar is born

Jamal Musiala will not remember his first World Cup match with much fondness – but when his career ends this will just be a mere blip on a showreel of greatness. From what we witnessed for large parts of Germany’s opening encounter, Musiala will be lighting up many major tournaments in the next decade.

The 19-year-old has flourished for Bayern Munich, scoring nine goals and delivering six assists this season, and looked a player in tip-top shape playing off the left of Germany’s front three. His touch is like silk and he has that rare ability of gliding with the ball which makes him so hard to defend against – as seen when dancing past four Japan defenders midway through the second half which opened up a glorious opportunity. The finish was not quite there – to rob the world of a classic World Cup moment – but everything else was.

Negative headlines will surround Germany – but a superstar has been born.
Lewis Jones

Morocco stubbornness could cause an upset

Morocco frustrated Croatia and their high-intensity pressing could be a thorn in the side of more teams.

Croatia had plenty of the ball (63 per cent), but they were not allowed to do anything with it as the Atlas Lions harassed, giving no time to their opponents.

A glance at the stats provides all the evidence required. Selim Amallah applied defensive pressure 80 times and Youssef En Nesyri made 70 sprints, so it was no surprise Croatia did not have time to breathe and Modric could not weave his magic.

Morocco will take a draw. On paper, you would imagine Belgium and Croatia move on from the group, leaving Canada and the African side behind. However, this result indicates Group F will be tight.

Morocco have only lost twice since the start of 2021, conceding 10 goals in 14 games. As Gareth Southgate proved in Euro 2020, teams that are hard to break down can go far in knockout football.

Could Morocco be bidding for the trophy? Probably not – although, the way things are going, anything is possible. But if they can play like they did on Wednesday against Croatia, they could head into the Canada game with a chance of leaving the group to face Spain or Germany in the round of 16.
Adam Williams

“A passive and woeful attempt at trying to play football.”

Those were the words of Sky Sports‘ Graeme Souness on ITV as Spain thumped Costa Rica 7-0 in Doha to record their biggest World Cup victory.

The 2010 winners were brilliant, but they were helped by an extremely poor Costa Rica side. The Central Americans managed just 18 per cent possession and failed to create a single attempt. It is just the second time a team has not had a shot on goal in a World Cup match since 1966, after Costa Rica themselves against Brazil in 1990. Wednesday’s hammering by Spain was also their biggest World Cup defeat.

“I did not think Costa Rica could get any worse, but they actually surpassed how bad they were in the first half. They were all over the place,” said Sky Sports’ Gary Neville.

Costa Rica have made big strides in international football in the past decade, reaching the quarter-finals – their best finish – in 2014 and qualifying for Qatar to make it three consecutive appearances at World Cup finals.

But in their first competitive encounter with Spain, they were a shadow of the side that upset the odds eight years ago by finishing as group winners ahead of Uruguay, Italy and England.

“Spain’s players will never have played in such an easy international as they have tonight,” Souness added.

Japan, who stunned Germany in Group E’s opening fixture, are Costa Rica’s next opponents on Sunday. On this evidence, Los Ticos are surely heading for an early exit.
Dan Sansom

It was a case of what might have been for Canada. They largely outplayed Belgium throughout and caused all kinds of problems to their creaking defence with their energy and verve, but just could not find the breakthrough.

Had Davies converted an early penalty, it would have been a very different game, but his tame effort was saved by Courtois and from there they just lacked the crucial cutting edge that was shown by Batshuayi at the other end.

They had 22 shots in total – five more than Spain mustered in their 7-0 demolition of Costa Rica earlier in the day – but just three of those ended up on target. They also beat Belgium in terms of Expected Goals (xG) by 2.61 to 0.76.

It was a real chance for a young side to lay down a real marker on the biggest platform of all, but in the end it was an opportunity missed. They will have to find a way to goal against Croatia and Morocco if they are to have any chance of reaching the last 16, but there is plenty of potential there.
Simeon Gholam