Australia wrapped up a 12th Rugby League World Cup triumph with a 30-10 victory over Samoa in the final at Old Trafford last weekend; the result underlined how the Kangaroos have dominated the international game since the 1970s

Rugby league is a simple game; 26 players throw a ball around for 80 minutes and, at the end, the Australians always win.

Indeed, the Kangaroos underlined that as they wrapped up a 12th Rugby League World Cup triumph in last Saturday’s final with a 30-10 win over Samoa at Old Trafford.

It was the perfect way for Australia to conclude their return to the international stage for the first time since a surprise 16-12 defeat to Tonga in 2019, having not played in the intervening years due to the Covid-19 pandemic.

That period of inactivity had led to the holders being ranked just fourth in the world heading into the tournament, and that was something which was not lost on captain James Tedesco in the wake of them retaining the Paul Barriere Trophy.

“The last three years, we haven’t been able to play and put this jersey on and represent Australia,” Tedesco, named player of the match in the final after scoring two tries, said.

“So, it was burning for a lot of guys to come over to this World Cup and represent well. We did that and hopefully our ranking has gone up a bit now after the tournament.”

On the surface, the Kangaroos’ class of 2022 was one of the most inexperienced Australia teams to play in a World Cup, with 13 of the 24-man squad previously uncapped at international level – the caveat being, of course, those players were all battle-hardened by State of Origin experience and, in some cases, being part of NRL Grand Final-winning teams.

It should therefore come as no surprise they went on to justify their status as tournament favourites, extending their run of being unbeaten in World Cup matches since the 2008 final defeat to New Zealand, and scoring 54 tries and conceding just eight in their six games in England this year.

Australia’s dominance of the international scene goes beyond the World Cup, though. They have not lost a Test series to a country from these shores since Great Britain’s 1970 Ashes triumph, along with winning six of the nine Tri and Four Nations Series tournaments held between 1999 and 2016.

“We go back to the early 1970s with the Kangaroos when you talk about our winning record,” Meninga, who played as part of the fabled ‘Invincibles’ and ‘Unbeatables’ teams which toured Great Britain and France in 1982 and 1986 respectively, said. 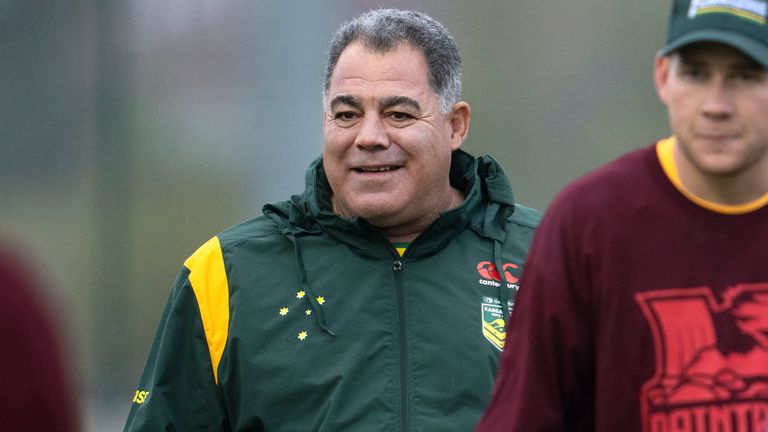 The expectation is we win tournaments – it’s not a burden to us, we carry that with great humility and respect.

“It’s been a dominant time for the Australian team, and I think we accept that really well as a group of players who put the green and gold jersey on.

“The expectation is we win tournaments – it’s not a burden to us, we carry that with great humility and respect.

“We understand everybody doesn’t want to see us win except for the most ardent Australia supporters, but we accept that, and we get on with business.”

It is not just the men’s game where Australia reign supreme, with the women making it three World Cup triumphs in a row themselves as Kezie Apps’ Jillaroos overwhelmed rivals New Zealand 54-4 ahead of the men’s final in Manchester.

At club level too, the NRL sides have come to dominate the World Club Challenge in the past decade, where four-time Betfred Super League champions St Helens will aim to become only the third English side to win it since 2012 when they tackle Penrith Panthers in Sydney next February.

And even with Samoa and Tonga now joining established powers New Zealand and England in being capable of challenging the Kangaroos, Meninga had a warning for anyone with ambitions of toppling the holders at the 2025 World Cup in France.

“This is only the beginning for this team, I can assure you,” Meninga said. “All of these guys are going to be together for the next three, four, five or six years.”