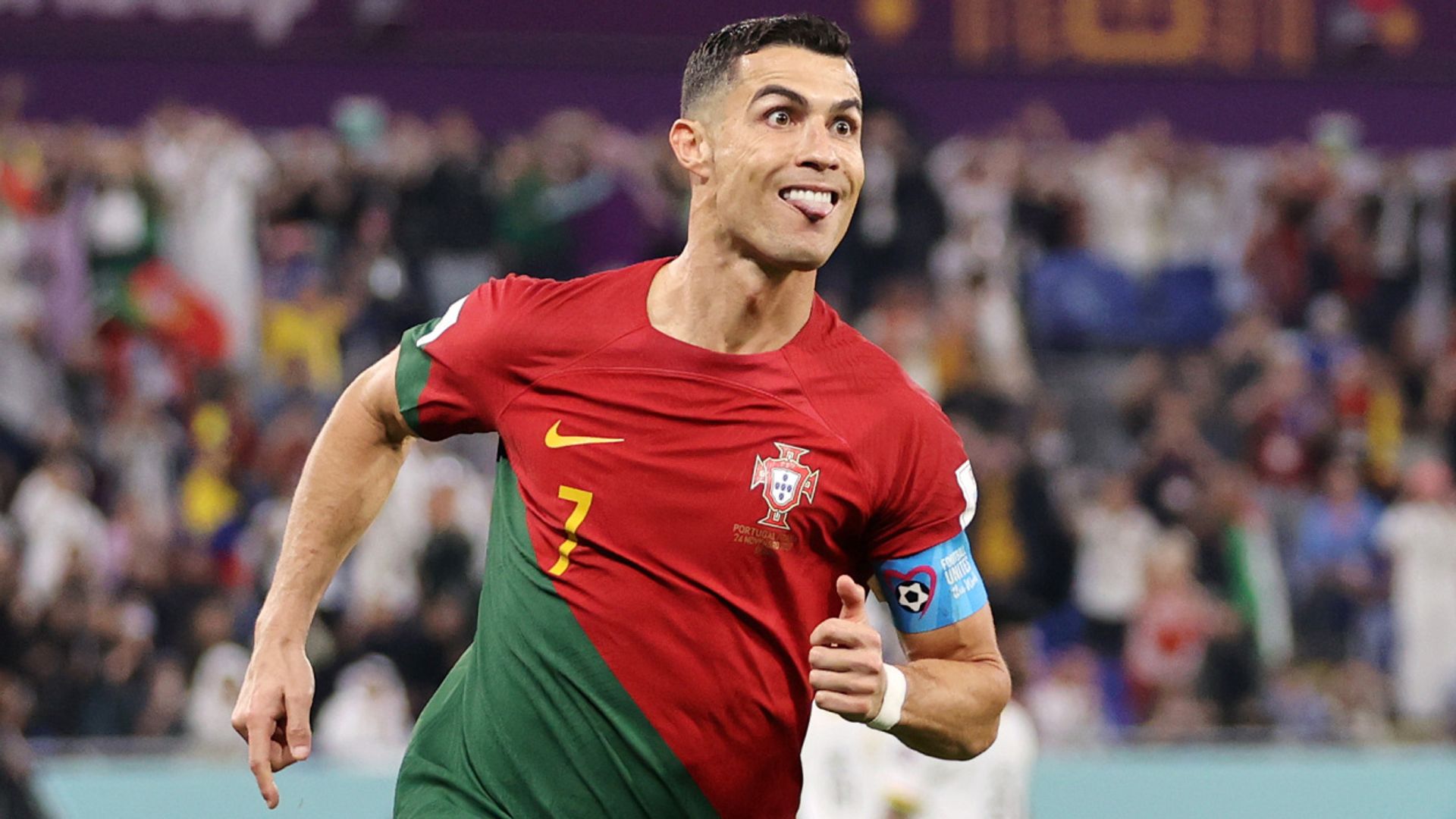 Cristiano Ronaldo became the first man to score in five World Cups as his penalty helped Portugal secure a 3-2 win over Ghana in a thrilling Group H encounter.

Ronaldo, a free agent after leaving Manchester United by mutual consent in the wake of his explosive interview, hit back at his critics with yet another piece of history when he converted the opener from the spot after he was fouled by Mohammed Salisu (65).

Ghana equalised against the run of play when Andre Ayew, their own veteran striker, fired home from close range (73), but Portugal immediately responded with quickfire goals from Joao Felix (78) and substitute Rafael Leao (80), both set up by Bruno Fernandes.

Ronaldo, who scored his first World Cup goal as a 21-year-old back in 2006, revelled in the spotlight following a tumultuous week and received a standing ovation when he was substituted in the closing stages, but Portugal had to survive a nervy finale after Osman Bukari headed home Ghana’s second goal (89).

Ghana had a golden opportunity to steal a point in the 10th minute of stoppage time when Inaki Williams caught Portugal goalkeeper Diogo Costa unawares to steal possession in the box, but the forward lost his footing at the crucial moment, allowing Ronaldo and his team-mates to cling on for victory.

How Ronaldo made history again

Ronaldo dominated the build-up to the game as the fallout from his controversial interview last week continued, and he immediately took centre stage during it too, albeit for the wrong reasons as he missed two gilt-edged chances in the early stages.

First, a heavy first touch from Otavio’s through-ball allowed Ghana goalkeeper Lawrence Ati-Zigi to rush off his line and deny him in a one-on-one, then, minutes later, he headed a Raphael Guerreiro cross inexplicably wide at the far post.

Ronaldo did have the ball in the net in the 31st minute as Portugal continued to dominate, but he was adjudged to have fouled Alexander Djiku before firing past Ati-Zigi, the referee’s whistle ensuring his celebrations were short-lived.

Ronaldo, who has emerged as a transfer target for Saudi Arabian club Al-Hilal following his release from Manchester United, continued to cut a frustrated figure in the first half, failing to capitalise when a Guerreiro header fell to him inside the six-yard box, but the narrative shifted dramatically after the interval.

Ghana had defended resolutely up until then, but Ronaldo finally seized his chance after he was adjudged to have been fouled by Salisu, firing an emphatic penalty beyond the reach of Ati-Zigi, his 118th international goal sparking wild Portugal celebrations.

Ghana were momentarily level after Portugal defender Danilo Pereira failed to intercept a cut-back from the dangerous Mohammed Kudus, allowing Ayew to score from close range.

But Otto Addo’s side were immediately pegged back again when Felix finished coolly from Fernandes’ through-ball, with substitute Leao then converting from another Fernandes pass for his first international goal only three minutes after coming on.

Those goals appeared to have taken the game away from Ghana, with Fernando Santos using the opportunity to take off Ronaldo for the final few minutes, but an error from Joao Cancelo allowed Bukari to pull another goal back and there was then a huge scare at the death when Costa was robbed by Williams.

In the end, though, Portugal held on, the victory taking them top of Group H and allowing Ronaldo to enjoy some respite as he continues to chase the one trophy that still eludes him.

Ghana coach Oddo Atto criticised the American referee who awarded the penalty that resulted in Ronaldo’s goal, calling it a “special gift”.

VAR chose not to intervene when Ronaldo went down under the challenge of the Salisu. Referee Ismail Elfath pointed straight to the spot, leaving Ronaldo to dispatch the spot kick for the opener after video technology chose not to inspect the decision.

“If somebody scores a goal, congratulations. But this was really a gift. Really a gift,” Addo said. “What more can I say? (It was) a special gift from the referee.”

Addo’s criticism of American referee Elfath was so direct that it could put him into trouble with FIFA.

When asked what he thought was the reason for Ghana’s narrow defeat, Addo responded: “The referee.”

“I think it [the penalty] was really the wrong decision,” he added. “I don’t know why VAR didn’t come up. There’s no explanation for me. And then it’s difficult against a world-class team when they are leading.

“I asked some people outside with FIFA if I can talk with the referee in a calm and a quiet way but they said he’s in a meeting and it’s not possible.”

After scoring in a record-breaking fifth World Cup, Ronaldo described the achievement as a “beautiful moment”.

“We started on a good foot,” he added. “It’s a very important win. We know in these competitions the first match is fundamental.

“It’s another record, too – that makes me very proud. I am very happy for the team to have put on an excellent performance. It was difficult but we deserved to win.”

However, Ronaldo wasn’t keen to discuss his acrimonious exit from Old Trafford, saying when asked about the issue: “All the rest, it doesn’t matter.”

Santos hailed his 37-year-old captain as a “phenomenon, a legend,” adding: “In 50 years’ time, we will still be talking about him.”

The victory sends Portugal top of Group H ahead of their meeting with Uruguay on Monday.

Uruguay were held to a goalless draw by South Korea in the earlier game in the group.

Player of the match – Bruno Fernandes

Once again, it was all about Ronaldo, but in truth he was a long way from his best. His team-mate Bruno Fernandes was a little closer to his. The 28-year-old, now a former team-mate of Ronaldo’s at club level, pulled the strings throughout and set up Portugal’s second and third goals with trademark through-balls.

“The records keep rolling in for Ronaldo. We heard a lots of ‘Suiiis’ today but then we ended up seeing the one that mattered. It was one to break Ghanaian hearts because they were predicting it would not happen today, that Ghana would prevent him from doing so.

“He was not anywhere near his best. Anyone who has watched Ronaldo in his career would not say that he was. But given the circumstances coming into this World Cup and the first game, the controversy that has been around him, the noise, the debate, the global attention, the ceaseless conversation, he still lifts Portugal up.

“He gave a good account of himself, he had a goal disallowed, snatched at a few chances, had a few heavy touches, but he is still Portugal’s reference point. Before the game, we spoke to a lot of Portuguese journalists and they were referencing the fact that so many people say: ‘Ronaldo can’t run’. Managers, analysts, everyone is talking about that.

“To Portugal, that doesn’t matter as he has been and achieved so much to the national team that just his presence could be galvanising even when we think it’s disruptive. What he does in training sessions and on the pitch is good for his team-mates.

“The game itself, we were hoping not to be disappointed. It was a sleepy first half but having spent the build-up with the fans, we were thinking there is so much colour and jubilation: we want to see a good game.

“And that second half was incredible. What would have happened if Inaki Williams hadn’t slipped? I don’t think Ronaldo and Portugal would want to find out and they didn’t need to.”

Saudi Arabian club Al-Hilal are exploring a deal to sign Ronaldo on a free transfer. Manchester United received an offer for Ronaldo from Saudi Arabia in the summer and were willing to accept the bid, only for the deal to eventually fall through.

Ronaldo says he rejected that move, worth around £305m, but news of Al-Hilal’s interest comes after Saudi Arabia sports minister Prince Abdulaziz bin Turki Al-Faisal revealed the country wants to bring him to their domestic league – as well as take over Manchester United and Liverpool, who are both seeking new investors.

“Who wouldn’t want him to play in their league?” Prince Abdulaziz told Sky News about bringing Ronaldo to Saudi Arabian football. “He’s a role model to a lot of young players – him and Messi.”