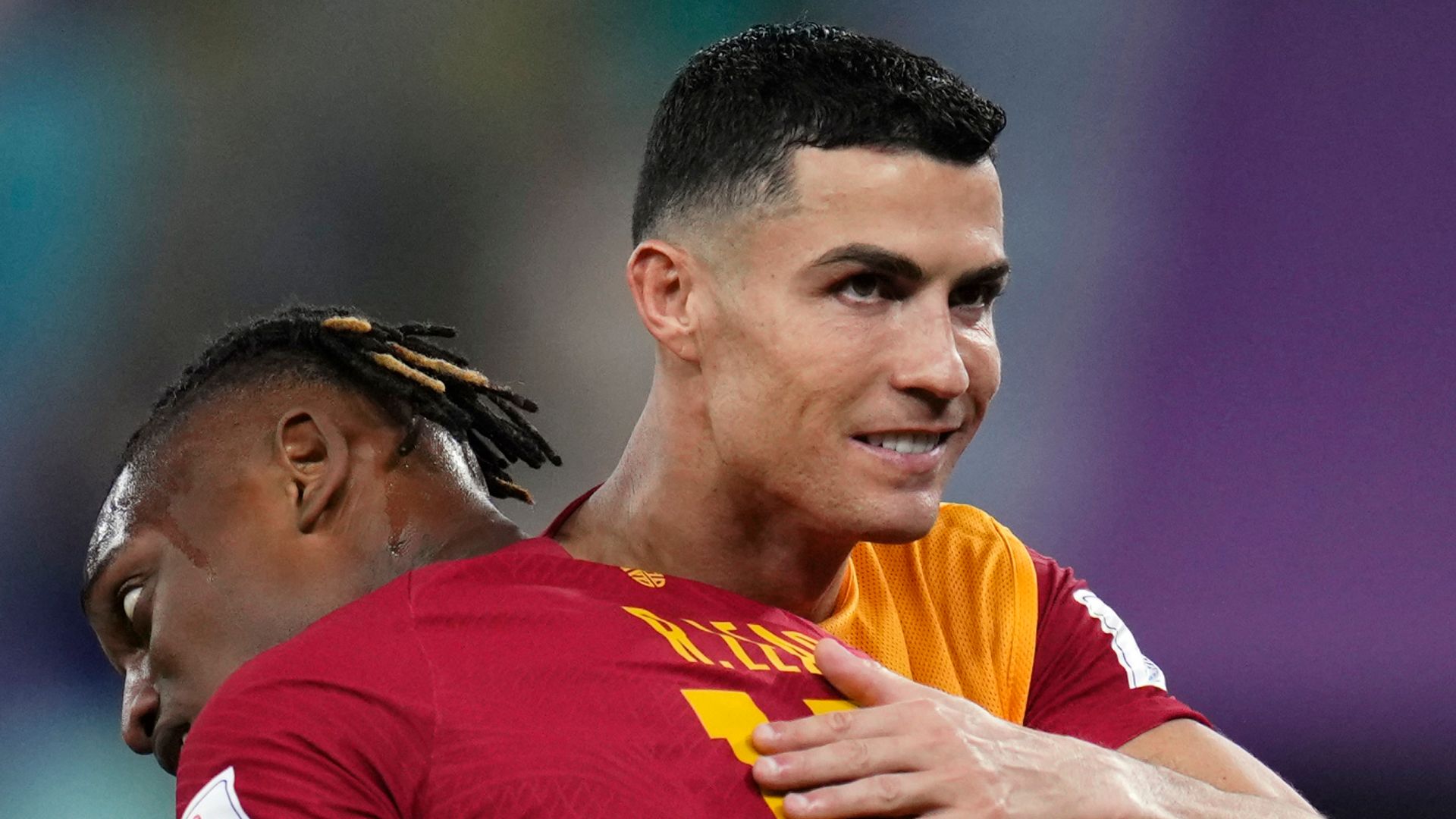 Ronaldo seizes his moment yet again

Two days on from his mutually agreed departure from Manchester United, Cristiano Ronaldo exhibited both the strengths and shortcomings that have come to typify his game at 37 as Portugal claimed a thrilling 3-2 win over Ghana.

Of course, he scored. His opener, emphatically converted from the penalty spot after he was fouled by Mohammed Salisu, showed once again his extraordinary ability, even at this late stage of his storied career, to bend the narrative to his will.

It made him the first male player to score at five different World Cups, another piece of history to quieten his recent critics and a feat which sums up his remarkable longevity as he chases the one trophy that has so far eluded him.

But while he remains a talismanic figure for his country, their captain and an undisputed starter in Fernando Santos’ team, there was evidence, too, of why he had lost that status at Manchester United.

First, there was the same uncharacteristic wastefulness in front of goal as seen in the first half of the domestic season, during which he only scored three times in 16 games for Erik ten Hag’s side.

In the 10th minute, a heavy touch saw him spurn a one-on-one chance up against Ghana goalkeeper Lawrence Ati-Zigi. Soon after that, a botched header from Raphael Guerreiro’s cross drifted wide.

Ronaldo spent the rest of the game waiting for service, hovering around Ghana’s defensive line and rarely involving himself in Portugal’s approach play as they tried, often fruitlessly, to find a way through.

By the end, he had had fewer touches (33) and completed fewer passes (15) than any other starter. But, crucially, he had also scored the goal which set Portugal on their way to victory. Ronaldo, for all his limitations at 37, remains the man for the biggest occasions.
Nick Wright

We had to wait until the final game of the first round of matches to see them in action. And then we had to wait another hour or so before we saw Brazil really click into gear.

But the five-time champions have arrived now and look set to be major contenders at this World Cup.

Through the final 30 minutes they played with skill and swagger. Vinicius Junior was excellent throughout and deservedly finished with a couple of assists to his name, but it was Richarlison’s stunning second, after his poached first, which seemed to inspire his team-mates in that final period of the game.

This is how we expect Brazil to play at World Cups.

From the bench, Tite displayed the array of attacking options at his disposal with Rodrygo in particular looking a real threat, while Premier League observers would not have been surprised to see Gabriel Jesus and Gabriel Martinelli immediately causing problems.

Behind them, Casemiro was imperious, while in defence Thiago Silva – the oldest player ever to represent his country at a World Cup – used all his experience to marshal the backline. Occasionally Serbia threatened but Alisson did not have a save to make.

This was not an easy opener. But through perseverance and then panache Brazil showed their strengths.

Neymar’s knock will be a worry but the real concern will be felt by Brazil’s title rivals. This team are going to take some stopping.
Peter Smith

Serbia were talked up as dark horses for this World Cup but perhaps 98 minutes against Brazil was not the best measure of their potential. They were organised for an hour, stifling the South American side, but once chasing the game they were overwhelmed.

In convincing wins over Norway and Sweden in September, head coach Dragan Stojkovic went with Aleksandar Mitrovic and Dusan Vlahovic in tandem up top. That is trickier for him to do against the best teams in the world. With Vlahovic, the threat is reduced.

The Serbia boss was clearly frustrated that he could not use Juventus winger Filip Kostic, while Mitrovic is not fully fit either. “It would be a completely different story if they were. They are not ready, that’s the way it is. We have a lot of injuries at the wrong time.”

Kostic is in the squad, at least, and Mitrovic managed to play 83 minutes. There will still be hope that Serbia can grow into the tournament but they find themselves in a battle against time as well as the opposition. With their best players fit, they can compete.

Stojkovic was a glorious playmaker in his pomp so it will have given him no great pleasure in setting up to stop the opposition. Perhaps the truer test of Serbia’s capabilities will come on Monday afternoon against Cameroon. They will need to show more.
Adam Bate

It is costly wisdom that is bought by experience, and experience counts for so much at tournaments like this one. The Swiss are like a wise old owl. And in the theme of the famed nursery rhyme, they speak little but take in and possess much knowledge. You could see that experience stamped all over their cool and calm performance against Cameroon.

The average age of Switzerland’s starting XI for their win over Cameroon was 28 years and 238 days. There was no panic even despite Cameroon’s fast start and they slowly grabbed control of the game when Cameroon ran out of puff and ideas.

They gave little away and always knew a moment or two would come their way when they unleashed their creative players into space. Granit Xhaka embodied much of this argument, playing with such assurance and quality in the heart of the midfield. Bigger tests than this are on the horizon but knocking this Switzerland side out of this tournament will prove a challenge. Beware the wise old owl.
Lewis Jones

The performance of Ajax’s Mohammed Kudus in some ways encapsulated Ghana’s display as they opened their Group H campaign at the World Cup with a tight 3-2 defeat to Portugal.

Set up in a 5-3-2, the African side camped inside their own half for the first hour in Doha, conceding the majority of possession to their European counterparts and rarely threatening Diogo Costa’s goal.

Ghana’s defensive approach meant Portugal struggled to break them down, but they were still able to create chances thanks to some questionable play by Kudus, who was twice caught in possession deep in his own half.

Kudus, lining up as one of the three midfielders, was then presented with a rare chance to launch a Ghana attack but, under little pressure, failed to pick out Inaki Williams’ run behind the Portugal defence and instead sliced a pass straight to his opponents.

Kudus, like the rest of his team-mates, was lacking a spark. But it was provided in the wake of Ronaldo’s penalty, which opened the scoring for Portugal and immediately saw the 22-year-old moved into a more advanced position by Ghana boss Otto Addo.

The move paid dividends, with Kudus twice coming close to equalising from range before setting up Andre Ayew’s equaliser with a driving run to the byline and a smart cross that picked out his captain.

Suddenly Kudus was playing with more energy, freedom and determination – all traits that embodied Ghana’s display for the final 25 minutes.

Ghana may have come up short in the end, with their more expansive approach late in the game providing the space for Portugal to score twice more, but they rattled their opponents and would have taken a point had Williams not slipped at just the wrong moment after dispossessing Costa in the final seconds.

Kudus’ dreadful display for the first hour was curious, given he has shone in the Champions League this season, scoring home and away against Rangers and netting against Liverpool and Napoli.

But the quality that brought him those goals on the biggest stage in European club football was evident in the latter stages against Portugal – and will need to be on show against South Korea on Monday if Ghana are to haul themselves off the bottom of Group H and into the last 16.
Joe Shread