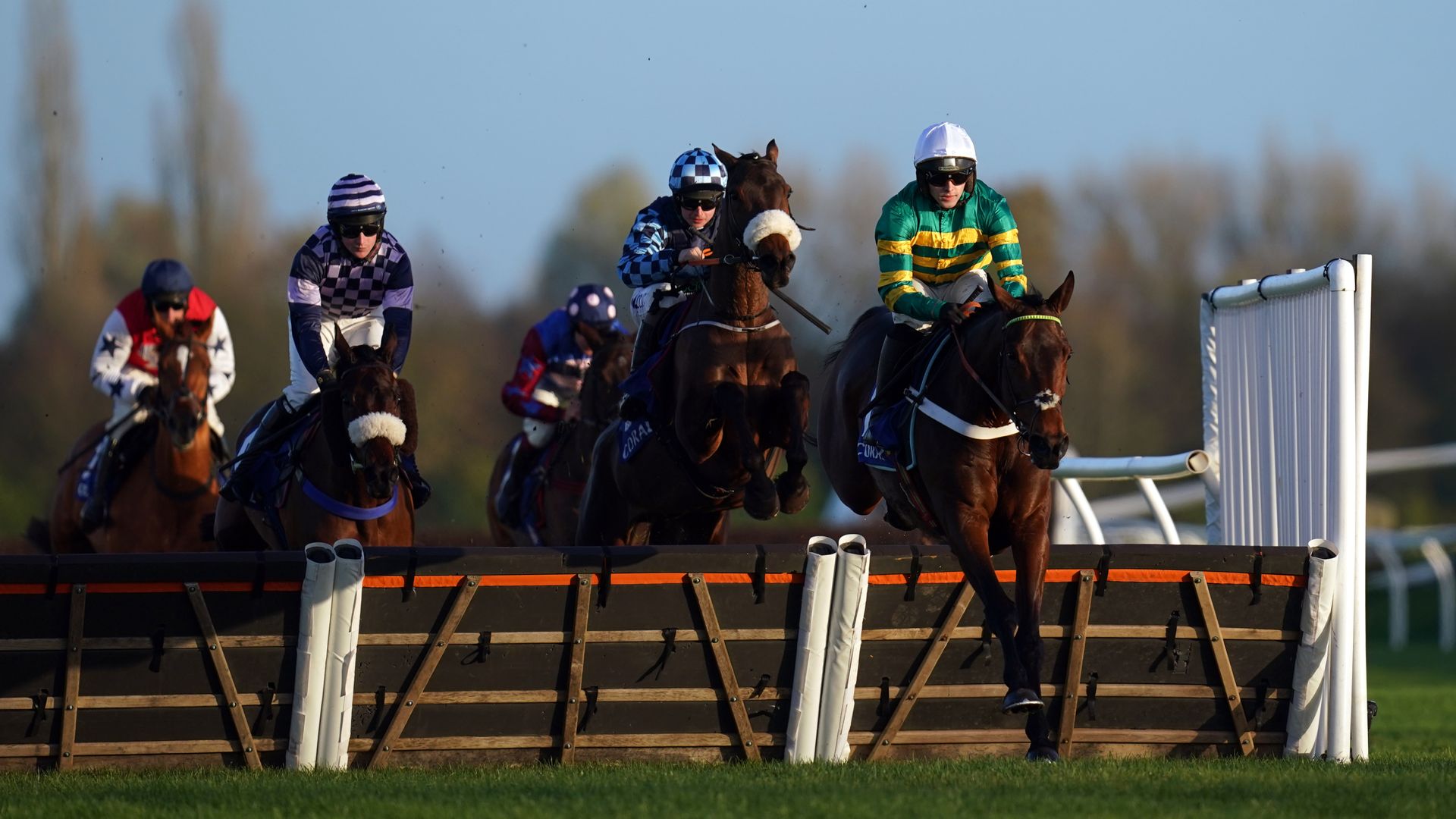 Champ pipped Paisley Park in a thrilling finish to the Coral Long Distance Hurdle at Newbury on Friday.

The two 10-year-olds battled it out right to the line in the three-mile contest, with the strong-travelling, front-running Champ just getting the better of the popular former Stayers’ Hurdle winner, who powered home under Aidan Coleman.

Jonjo O’Neill Jr just had enough in the tank to thwart the Emma Lavelle-trained gelding as the pair were split by a neck, with the width of the track separating them.

Paisley Park did not jump with great fluency over the last two as he ate into Champ’s lead, while the Nicky Henderson-trained winner tied up towards the line.

However, Paisley Park just ran out of real estate, much to the relief of the winning trainer, who told Racing TV: “They’re good horses, but they are getting on a bit. Champ and Paisley Park have been around for quite some time, and they’ve been two genuine Grade One horses, so to come and fight out a race like that – I think anyone would enjoy it.

“I thought we were beaten actually, but when we got the first replay we’d got it. Our old boy has won an RSA Chase over fences and everybody adores him.

“He’s got the most lovely character and he’s such a sweet horse. AP (McCoy) rode him in a gallop here 10 days ago and he thought he was in great form, but he does have his ailments as well – he’s a bit creaky, like all of us at that age.

“His back isn’t very good and that’s why we’ve stayed hurdling over the last couple of years, only because fences put that little bit of extra pressure on it.

“JP’s (McManus, owner) team at Martinstown do a wonderful job, so he comes back to me in very good order at the beginning of every season and then it’s up to me and you do have to mind him a little bit.

“He’s a bizarre character, but he’s a phenomenal horse with a phenomenal team and I’m sure we’re going to meet again in three weeks’ time, so on it goes (in the Long Walk at Ascot).”

Coleman was left naturally disappointed to be beaten so narrowly. He said: “It was a massive run, and you have to be happy with him, (but) it’s annoying to get beat, isn’t it?

“I thought I had him rolling and I wanted to keep away from Jonjo, only because he’d make the running and I thought if anything was going to get lonely in the straight, it would be something that been there the whole way.

“My horse knew he was there and I thought I’d have one go and we might get him, but it didn’t work out which is annoying.”

Despite having his colours lowered, Lavelle remained upbeat after Paisley Park’s brave effort.

She said: “It’s brilliant. He’s back and he’s the most extraordinary horse, he really is. I just kind of felt if we could have jumped one of the last two hurdles well it would have made the difference, but I take my hat off to Champ. They’re two special 10-year-olds running races like that – it is really what National Hunt racing is all about.

“It’s probably the best first run he’s had for a couple of years and we’ll take the same route. So long as he’s all right after this, it will be the Long Walk, then it would be nice if he could make the Cleeve his own again and then on to Cheltenham (for the Stayers’ Hurdle).”

The 146-rated eight-year-old put his chasing experience to good use against last season’s Grade One Challow Hurdle winner, who had won readily on his chasing debut at Warwick.

Stage Star, sent off the 2/7 favourite, made most of the running, at times jumping with aplomb, although he hung and markedly ran down his fences down the final straight.

However, the Tom Lacey-trained Sebastopol, who had been pulled up at Wincanton last time, travelled well and was always stalking the pace under Stan Sheppard.

The pair were locked together at the last of the 16 fences in the two-and-a-half-mile contest, and Sheppard’s mount flew the last to quicken clear, as Stage Star veered left towards the far rail.

The 22/1 chance went on to score by five lengths, with Wonderwall, making his chasing debut, a promising third, some three lengths further back.

Jet Powered followed in the hoofprints of some illustrious stablemates by making a sparkling debut under Rules in the Coral Bet Bundles ‘National Hunt’ Maiden Hurdle.

A 350,000 guineas purchase after winning an Irish point-to-point, the Jet Away gelding was the 8/13 favourite provide Nicky Henderson with a sixth victory in the last nine runnings of this race, with dual Champion Hurdle hero Buveur D’Air (2015) and Jonbon (2021) among his previous victors.

The five-year-old travelled strongly and jumped accurately throughout in the hands of Nico de Boinville and passed the post with 11 lengths in hand over Dan Skelton’s Ittack Blue, another expensive recruit at 310,000 guineas after also winning in the point-to-point sphere.

Paddy Power cut Jet Powered to 6/1 from 12/1 for the Supreme Novices’ Hurdle at Cheltenham, while Coral offer slightly more generous odds of 8/1.

Frere D’Armes made it two from two over fences for the Skelton team in the Coral Racing Club Novices’ Limited Handicap Chase.

A 4/1 shot off the back of victory at Kempton earlier in the month, the five-year-old had to knuckle down from the final fence to see off the gallant Aucunrisque by two and a quarter lengths.

Stay Away Fay provided Paul Nicholls with a third successive victory in the Coral Get Closer To The Action Novices’ Hurdle.

Connections went to £305,000 to secure his services last December – and while he looked booked for minor honours halfway up the straight with Henderson’s Russian Ruler going great guns in front, the latter tired on the run-in and Stay Away Fay ultimately won comfortably by five lengths.

Heezer Geezer came through to beat a tired Russian Ruler to the runner-up spot.