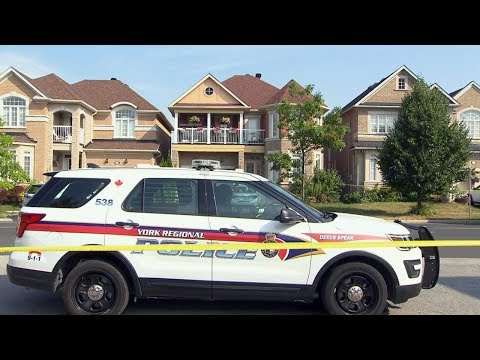 23-year-old man charged with 4 counts of 1st-degree murder 23-year-old man charged with 4 counts of 1st-degree murderWell to Markham Ontario, now we’re police Ivy, suspicious deaths of four people found in a home yesterday is now a murder investigation or Megan Fitzpatrick was at today’s police briefing. She joins us live right now. So talk to us about what police are sharing about this patient Megan? Will the news this morning is that for first-degree murder charges have now been laid against him and amen has examined? Who is from the city of Markham Michael? I wear these murders happen where we are right now, the homework by the bodies were found. He is 23 years old. He is expected to make an appearance in a Newmarket courtroom this morning. He is the same man that was taken into custody yesterday when police arrived on the scene when they were caught see this home, they will not confirm yet what his relationship to the victims, if any, but they did also confirm some details as to who the victims Are saying they are three adult women and one adult man, but we do not their names yet Michael at police, saying that autopsies are being carried out today and it could be some time yet before we do learn their names ages and relationships to each other. Please not saying any of that yet, but again they recap that they were called here to home. Behind me at about 3 p.m. yesterday with reports that some people, multiple people, were possibly injured. Please not telling us yet this morning who made that phone call, but they say when they arrived here. They were greeted at the door by the suspect that they did the custody and have now charged that there was some kind of interaction and whatever took place during that interaction LED them to take him into custody immediately before they even started searching the home and when They did, that is when they found the four victims. They were already dead, pleasing they were not trans to hospital. They were confirmed dead when the police arrived here. They are saying that they are not looking for any other suspects other than that man that they have now charged and they’re, trying to reassure the community. Michael here’s, what Constable Andy Patton. This morning there were two hundred plus people last night when I was here at the scene, and we want to reassure them that we do have this person in custody he’s now facing charges and if anyone needs any sort of emotional support or help dealing with this Very traumatic of a weider’s and deceit that that help and support that they might need other questions, Michael because the case is now before the courts, including what kinds of injuries are these victims sustained causes of death where he saying that he can’t speak about.. So those kinds of questions for Hots will be answered during the court process. Socks. That said, it’s an allen. Murder scene on their street saw this is relatively quiet, neighborhood very friendly, a lot of people out with their kids this morning walking their dog they’re saying they just can’t believe something so tragic happened in that house. Yesterday. Here’S more what’s on neighbors were telling us robbery. Never did think for one minute was going to be what we had right now was her mother’s situation. I didn’t know what happened until I come. What’S the weather in Ravenna way, we just came back and that’s when we learned about it and it’s very sad. The whole peaceful nature of this area has gone people being playing at gstaad and a lot of unanswered questions. Obviously people wanting to know what happened to your even this morning. Curious people are coming by to look at the scene for themselves and well, please say not looking for any other suspects if they are appealing to the public forum forum, Michael Tang. If anyone has any relevant information, witness anything to please call York, Regional Police, their homicide unit or to call Crimestoppers anonymously, Michael A 23-year-old man has been charged with four counts of first-degree murder after the bodies of three women and one man were found in a home in Markham, Ont., York Regional Police say.