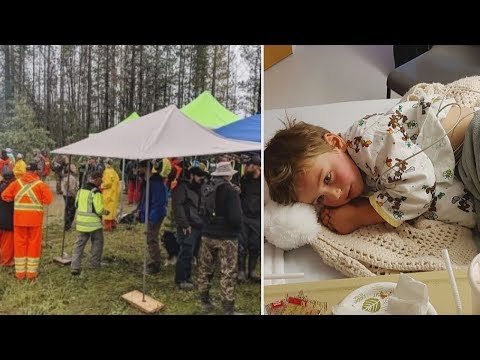 4-year-old missing in B.C. wilderness found safe 4-year-old missing in B.C. wilderness found safeWill Tyco Hazard and her friend were taking four-year-old George hasn’t been wild berry picking near McKenzie early Saturday afternoon when they arrived, George didn’t want to wake up from his nap, so his mom told him she would be close by and he should find her when he Stop now, but when they went back to the car about 10 minutes later, he was gone. Then came the search Cruise then eventually hundreds of volunteers to K9 units of professional tracker and a chopper. It wasn’t until Sunday, 33 hours and she was laughing little George was found Tyco hazards, his her knees just buckled when she got the news. Older people’s attention just believe he’s alive on the shores of Williston Lake. He was immediately taken hospital. He told his mom. He ate blueberries and heard people yelling for him, but, like kids often do he was hiding and scared and just waiting for his mom. Oh she is, he is doing amazing. He was cold, he warmed up really fast and scared, or crying or anyting. When does his mother have any regrets when it comes to all of this and how it actually unfold in well yeah? She certainly does I’m sure, as many parents would in this situation is what she had said when we asked her the question that we wish. We could have done so much more different, but there’s no reason to dwell on that and I will do it different in the future doing very well and you again young life for us tonight. Thank you. Four-year-old George Hazard-Benoit went missing overnight in the northern B.C. wilderness but was found safe. The child had been berry picking with his mother and her friend at Lions Lake, and was napping in the family van 10 metres from the two adults when he disappeared around 12:30 p.m. PT on Saturday.