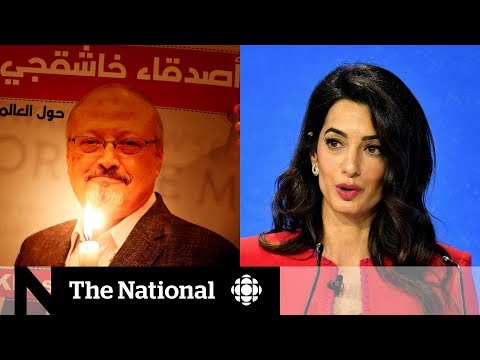 Amal Clooney decries ‘collective shrug’ over slain journalist Khashoggi Amal Clooney decries ‘collective shrug’ over slain journalist KhashoggiThis conference comes at a time when not only media freedom is under threat, but when more than ever journalist themselves are at risk. Each Square here represents one of the 99 journalists and media workers killed last year. Today, there’s a focus on one of the most bold and brutal: the killings, little more than a collective shrug official found. What she called credible evidence inside the consulate in Istanbul last year is linked to Crown Prince, I miss being so mad and yes, kalimar, says he’s poor record on media Freedom should disqualify the country from hosting the G20 Summit next year, unless its leaders take responsibility for The Killing August 8th supposed to bring the issue to the attention of Saudi Arabia and say to them that keep those conditions are not being met. A meeting will be held elsewhere this time from Jamal khashoggi fiance. In her first interview with Canadian media at each age, NGS called on Ottowa to help her find Justice to me and Jade tuition. Difficult situation take place in Saudi Arabia, places where we can meet and talk even with those countries that are acting in ways that are 100 % opposed to R-value in Saudi Arabia is scheduled to take place. There are already calls for Canada to boycott calls. That likely will only grow louder. Eric Shuffle CBC News, London Two Russian news outlets banned from U.K.-Canada press freedom event in London for ‘spreading disinformation.’