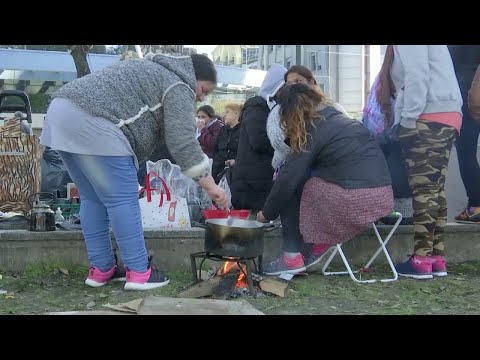 Argentine lawmakers approve emergency food bill Argentine lawmakers approve emergency food billBowing to pressure after weeks of Street protest was just over half of the population. Now living below the breadline. Argentines at PT’s have approved an emergency bill that would increase funding to soup kitchens and Welfare programs around the country set the alarm to testers. The church and other religious groups warned about the food crisis, but the government didn’t want to see it right. That says, who’s been camped outside the Congress building since Wednesday agree Mauricio macri Center sweeping Authority measures in 2018 as possible IMF bailout to help struggling economy versus to say that the government has put those policies before everything else. But despite the great needs we get very little help and we’ve very expensive and it’s impossible to buy meat and vegetables fruit, America’s second-largest economy. But it’s still one of the continents. Three countries where hunger has increased since 2018, the average basket of household goods has gone up 57 % since loss are the economic crisis. Defense and inflation spirals emergency bill would increase the budget devoted to the country’s food and nutrition policies by 50 %, but still has to be approved by the Senate. Subscribe to France 24 now:
http://f24.my/youtubeEN

Argentine lawmakers on Thursday unanimously approved a draft emergency food law to free up resources for social programs amid a worsening economic crisis.

Soaring inflation and rising poverty have stirred outrage at austerity measures introduced by center-right President Mauricio Macri’s government in order to comply with the terms of a record $57 billion IMF bailout.

Thousands of protesters have been camped near the Congress building since Wednesday to demand more funds be released for welfare programs and for soup kitchens and schools.

The bill, yet to be approved by the Senate, would provide a 50 percent increase in food assistance programs to growing numbers of poor.