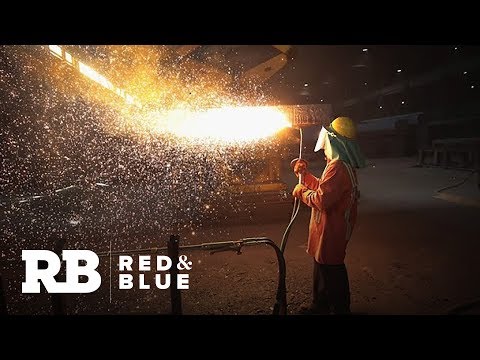 As Trump claims steel industry is booming, U.S. Steel plant to cut nearly 200 workers As Trump claims steel industry is booming, U.S. Steel plant to cut nearly 200 workersAround 200 steelworkers in Michigan are bracing for layoffs. The United States Steel Corporation said Tuesday. The decision to cut workers is temporary. However, the company did not specify when people would return to work. It comes during a tow. Don’T you with time for us, Steel stock prices for the company have dropped by nearly 70 % from the beginning of March 2018. That’S when President Trump announces tariffs on steel and aluminum Imports. Scrutiny is now growing over claims. His administration has made about the Resurgence of domestic Steel on Monday. Vice president Mike Pence said, the Auto industry is quote roaring back in Michigan and here’s what President Trump had to say last week about steel production. He was at a rally in another rustbelt state. Pennsylvania is dead. Okay, I don’t want to be overly crude. Your business was dead and I put a little things: a 25 % tariff on all of the dump steel all over the country, and now your business is thriving. Probably this few businesses that have gone proportionately of like steel and alone, we did it with aluminum to me now to discuss. This is Keith Lang, he’s a Washington correspondent for the Detroit News, Keith thanks very much for being with us. Do we know what prompted these layoffs? I think the combination of a very uncertain trade environment as a, but you were just playing from the president mentions he’s instituted tariffs on foreign, steel and aluminum that have been placed any place for year. We are also in the midst of a burning trade war with China, with tariffs being thrown back and forth on on each side, and I talked to a lot of business owners in Michigan. That just say it’s really hard to operate in such an uncertain environment. Call from some of your recent reporting you ride. The Trump administration’s tariffs have created an uncertain trade environment for small manufacturers in Michigan who are concerned about the impact on their bottom line. Kennedy’S last, what impacts have you seen on the ground in Michigan from the trade Wars body, parts that end up in cars that are built by GM and Ford and Chrysler, but they’re, not they’re, not the company’s themself? I talk to One gentleman who owns a company in Michigan that makes plastic components that go parts that come to him by the time. Sometimes it’s been two or three times and increase their price by 7 %. After the steel and aluminum tariffs, no they’ve been in place for a year and there’s all this talk of new tariffs, but the steel and aluminum small business. You don’t have the margin to absorb 25 or 10 % tariff. You didn’t have to pass that on to your consumers, a white working-class voters. How can we expect the presidency conomic policies to impact from voters in Michigan, Michigan, Pennsylvania, Wisconsin, and that goes were the states that have been known as a blue wall in politics for a generation and the president was able to slip them? There’S been a lot of great uncertainty since that election, and it remains to be seen if those same voters come out with the same fervor, because you look at a state like Michigan. The president won Michigan by about 10,000 that secret Whip, and if that happens in those same three states with the same map, otherwise I’ll be song 2016. Then we have a different result in 2020, who turned out we’re white voters without college degrees of everyone who cast a ballot, 64 % said they thought the economy was excellent or good picture. This pain still holds true today, yeah. I think that guy get from readers. There’S some there’s, sometimes I disconnect almost you know how I talk to small business owners and they’re, saying that it’s impacting their bottom line, president, that someone needed to stand up to China and that I’m being unfair to the president by hoarding what these businessmen are saying Or business men or women, so if that is true in a broader sense, which we won’t know until people cast their votes, then it won’t have the same impact that this type of economic environment might have another presidential campaign bring back in Michigan. Give us a sense of the picture there. Have there been any economic benefits the state has read since President Trump took office issues because they are impacted by not just a steel and aluminum tariffs. They are impacted by the discussions that are going on with Mexico and Canada about a replacement for the North American Free Trade Agreement. They are also, the president is also considering adding a 25 % tariff on imported cars and parts was. The Auto industry is free unanimously. Against even the Detroit automakers are saying that would expose us to retaliation in countries that we need to sell cars in supposed to be a decision on that in May. The president said he’s given 6 months. If he said to see, if you can work out a deal with you, but there still a possibility that we could have by the end of the year wow, I’m all right, we’ll keep playing in Washington for a ski. Thank you very much. The U.S. Steel Corporation said Tuesday that it will temporarily lay off nearly 200 employees, as the company’s stock prices have fallen nearly 70% since March 2018. Keith Laing, Washington correspondent for The Detroit News, speaks to CBSN’s “Red and Blue” about the impact the staffing cuts will have.