At least 13 people were arrested at anti-fascist protest rally 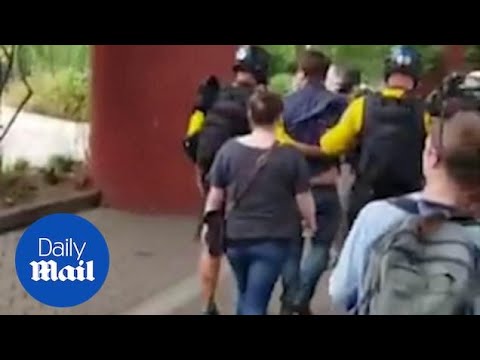 At least 13 people were arrested at anti-fascist protest rally At least 13 people were arrested at anti-fascist protest rallyStop Police in Portland, Oregon seized weapons such as bear spray, clubs (right) and shields from ‘multiple groups’ as right-wing groups and far-left counterprotesters (left) gathered on Saturday. Authorities arrested the leader of a right-wing group on the eve of a rally that’s expected to draw people from around the U.S. to Portland, Oregon, on Saturday, prompting Patriot Prayer’s Joey Gibson ( inset) to urge his followers to ‘show up one hundred-fold’ in response. Meanwhile, in a Saturday morning tweet, President Donald Trump wrote ‘Portland is being watched very closely.’ He also wrote that ‘major consideration is being given to naming ANTIFA an ‘ORGANIZATION of TERROR.”